I headed to the coastal farm fields this morning at first light, and it was a cold old morning that got progressively greyer. I could see that there was snow around, as the Lakeland fells and Bowland were covered in the white stuff, but down here on the coast it was clear.
My blog title sums the morning up perfectly, and I could easily have titled it 'A Birdless Walk', 'Wot No Birds', or some other title that conveyed that it wasn't half a quiet morning. So, this is going to be brief.
I had a look on the sea for about three quarters of an hour and saw 'diddly squat'! Not a single Merg, Diver, Eider or Scoter. Nothing except a flock of seven Cormorants. I had two Turnstones on the sea wall and a Kestrel perched on a post and that was it. And that includes my walk around the farm fields. 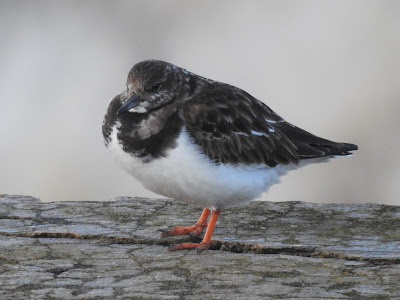 Turnstone
Driving to the coast I noticed Pink-footed Geese dropping in to one of their regular feeding areas on farm fields between the coast and the estuary, and I thought that on my way back home I would have a look through them. On my way back home, they had moved into another field that wasn't viewable from either of the two lay-bys on this busy stretch of road.
I hope tomorrow fairs better when we attempt some ringing at my Bowland feeding station. I hope I haven't just jinxed it!