If you live in the UK you will be aware that we are now in our third period of lockdown as a result of Covid 19. I don't want to dwell on this at all, as it is something that we all need to strive to reduce transmission of, to return to a state of relative normality, but it is worth mentioning how it will affect my activities, and as a result what will appear on this Blog.
We have been asked by the British Trust for Ornithology (BTO) to err on the side of caution, and only undertake ringing activities on land where we reside. Under the tier system we were permitted to continue through the exemptions provided by the 'voluntary or charitable activities' clause, and technically this also applied to lockdown, but the BTO felt that this wasn't in the spirit of what lockdown is striving to achieve, and hence being asked to err on the side of caution. From a personal perspective, I think that some of the ringing surveys that I undertake are completed safely, and I think that they could have continued without any risk, but I do respect and fully support the BTO's advice and guidance on this. The sooner we can get the transmission rate down, and save lives, the sooner we can get out again and continue collecting essential conservation data to help our beleaguered bird populations.
On a different, but connected note, the government is allowing shooting to count as a form of exercise during the lockdown! The British Association of Shooting and Conservation (BASC) on their website states that..."in light of the government providing greater clarity on its Covid-19 guidance and regulations, BASC is advising that outdoor shooting activities as a form of exercise are permissible once per day in England during the national lockdown, subject to two conditions:
1. You should only travel locally to shoot which is to stay local in the village, town, or part of the city
where you live as defined in government guidance.
2. When shooting you should only meet with people you live with, your support bubble; or when on
your own, with one person from another household".
I wonder how easy it is to find a shoot that operates in a village, town or city! Similarly, the fishing community, particularly the Angling Trust, has been celebrating that the "Government have now formally responded to the representations made by the Angling Trust...and (we) have been able to present a case to which the Government have listened. On this basis I (Angling Trust) am pleased to announce that fishing will be permitted during the third national lockdown in England".
I think from the above you can draw conclusions as to where the governments priorities sit, and also which organisations are doing the right thing. I think this smacks of double standards as far as the government is concerned!

So, for the period of the lockdown I won't be able to do any ringing, other than in my own garden, and also my birding will be restricted, because of the local aspect of the guidelines. However, the government has failed to define 'local area', and I think this is a serious error on their part. My work as an Ecologist will continue during the lockdown period, as this is allowed by government, and it has also been classed as essential. So, this will at least keep me in the great outdoors! As I work alone, and seldom come across anybody at all during my site visits, the Covid risk is very low.
Anyway, enough of Covid. I don't mean to dismiss it as something unimportant, but rather want to focus on more positive things for my own well-being.
Prior to the start of lockdown, Gail and I visited our Bowland feeding station to top the feeders up. It was a cold, crisp morning with a small amount of lying snow. At the feeding station were the usual suspects including Chaffinches, Robins, Great Tits, Blue Tits and Coal Tits. We duly topped the feeders up, and set off for a half hour walk through the woodland.
It was quiet in the woodland, as woodlands are in winter, but with a dusting of snow and a crisp frost it had a magical to look to it. We flushed a Brown Hare, and the only birds to make it in to my notebook during our walk were a Song Thrush and a couple of Redwings. 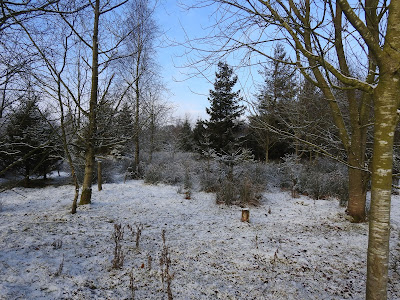 A winter wonderland
Yesterday, I completed a survey at the wintering bird survey site in northwest Lancashire that has an area of marsh just to the east of it. It was another cold one, but nevertheless pleasant under the clear skies. I lost the feeling in my toes rather rapidly, but later after a few hours in a sheltered spot in the sun, was taking a couple of layers of clothing off and I could feel my toes once again!
As I walked along the first hedgerow, I pushed a flock of ten Fieldfares and five Redwings along the hedge, and they then dropped into a wet field to feed. In the wet field was a further thirty Fieldfares, and it seems that as most of the berries have now been depleted, they are turning their attentions to ground invertebrates, particularly when the high water table is pushing them to the surface.
Next up was a bird that I don't see many of every year, and that was a Woodcock that I flushed from a wet ditch; nice. During my first VP observation period, I picked up a number of Rooks that were flying from a woodland roost to foraging areas, and 110 of these delightful Corvids flew past.
A number of Pink-footed Geese were moving around, particularly shortly after first light, and I recorded 1,100 moving in various directions, but mainly north and east. This particular VP is closest to the area of marsh, and I had a Barn Owl hunting over the marsh for a good half hour. It would periodically stop and perch up on a fence-post, before continuing to forage. 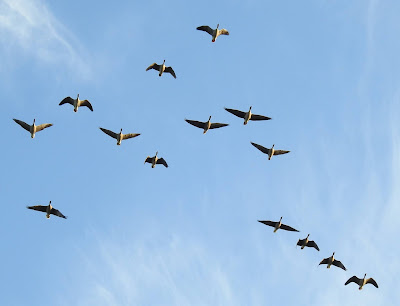 Pink-footed Geese
Out on the marsh I could hear Teal and Water Rail calling, but I have no idea how many, so they are recorded as 1+. I had five Skylarks head high south late morning from my second VP, and Sparrowhawk and Goldcrest were welcome additions to both the maps and my notebook. 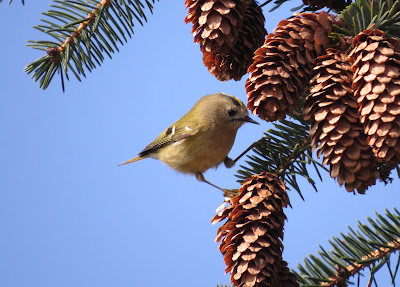 Goldcrest
It's dreich as a I write, and the forecast for tomorrow, is for more of the same. It's looking better on Friday, and I have another wintering bird survey to complete, so I look forward to that.