2020 was a frustrating year of stop-start ringing at our site Oakenclough, situated at the western edge of the backbone of England, the Pennine Hills.  The year was one of consistently poor weather – cold, wet and windy with a distinct lack of sunshine. The poor weather coupled with the many non-visits caused by lockdowns resulted in ringing totals below our pre-Covid projections at the beginning of the New Year.
Despite these setbacks we managed a creditable total of 679 captures, 619 new and 60 recaptures (subsequent) birds. The most ringed species Meadow Pipit, followed by Willow Warbler and Redwing a close third. Prior to today the last visit to Oakenclough was on 26 November 2020. Below is a table of the birds caught and one that shows the range of species in a typical year, early spring to December. 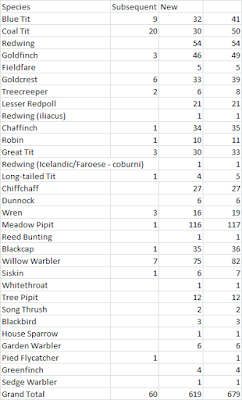 This morning and for our first time in 2021 we hoped to catch early migrant species such as Goldcrest, Chiffchaff and Meadow Pipit. (“Mipits” as they are named by students of visible migration.). Mipits have been migrating north this week - see Arnside and Silverdale Blogspot.

With luck today we might expect to also capture both Lesser Redpolls and Siskins, two species strangely absent during 2020.

I met Andy at the unearthly hour of 0600 in the half light of a dull cloudy morning. We left at 1130 after a rather slow session and 18 birds caught: 9 Goldfinch, 4 Meadow Pipit, 2 Robin, 1 Dunnock, 1 Chaffinch and 1 Long-tailed Tit.

Although we caught four Meadow Pipits their northward movement was far from obvious, best described as a “dribble” of some 15/20 individuals all morning. Meadow Pipits' diurnal migration in spring takes place from mid March through to mid April and often takes place high in the sky, out of range of human vision; almost certainly, our 15/20 was an underestimate of true numbers, even at this, the early days of their migration. 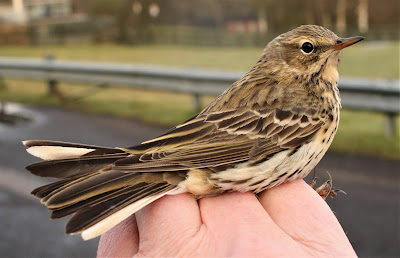 It was good to see Goldfinches again, a species difficult to find of late. Unlike most years, Goldfinches have been absent from my own garden for months, returning only in the last week or so. So too Greenfinches, already prospecting our conifers where they nested last year. 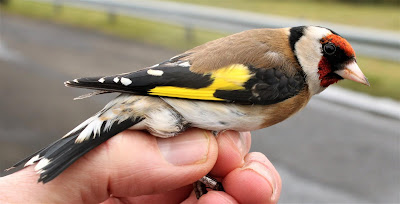 Today's Dunnock, a first winter female, still carried last year's tail. The tail bore evidence of a period of poor nutrition during the nesting period of 2020. 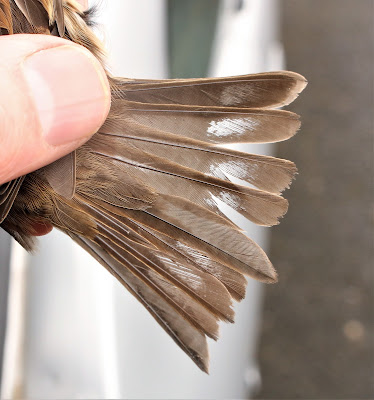 Even in the hand a Robin will display their red breast to best effect in case the ringer is a rival. 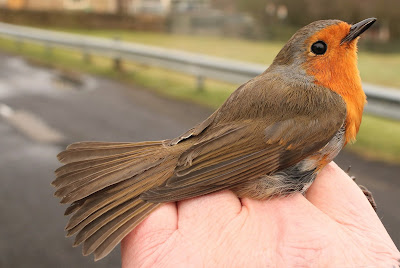 If Lesser Redpolls and Siskins were around today, we didn't see or hear any. Nor Chiffchaffs or Goldcrests.  All the more reason to try again soon.

Linking today to Eileen's Blogspot and Anni in Texas.