It's usual for me to spend a short time only at Braides Farm where the parking gateway allows views over a wide expanse of open fields devoted to growing grass. And more grass.  And not many birds.
After the autumn and winter of 2020/2021 there are still large areas of floods that have held a few Whooper Swans for weeks now. Imagine my surprise this morning to see those few swans suddenly transformed into an enormous herd of Whoopers that counted in the region of 450-470 individuals. The herd extended from the roadside, north to the River Cocker and then all the way across to the sea wall some 300 yards away. The count may prove to be bigger as when I later drove up to Conder Green, more Whoopers were in the roadside fields there but mostly hidden from view by hedgerows.
Click the pics. Here's a not very good video shot with a Sony and 135mm lens.
And then a couple of closer pictures with a 600mm. All of a sudden the herd erupted into a clamour of frantic calling and whooping, I suspect they will be heading off back to Iceland very soon. 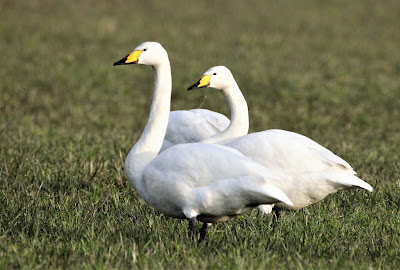 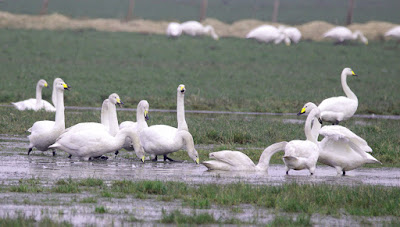 Whooper Swans
At Hillam, and where 2 Sand Martins flew across the lake, I checked the water level to see if Avocets might return. Last year's nesting island is now buried by autumn and winter downpours. A word with farmer Chris and he said he would look into making the island visible again for the spring and summer.
I drove up to Conder Green where I soon picked out a single Avocet amongst the 10 Shelduck and 40 Black-headed Gulls. 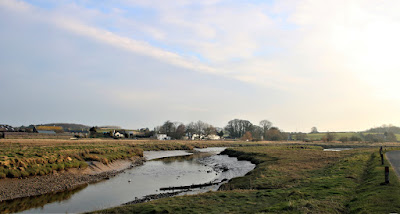 Conder Green
The Avocet won't be alone for long - soon joined by several more I expect. 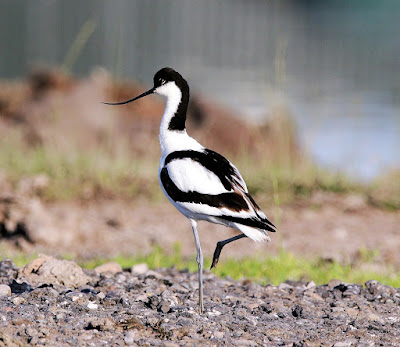 Avocet
The Oystercatchers here are becoming flighty. I saw a group of four in the throes of their springtime “piping” display. The piping displays in this the early breeding season allows the birds to establish a territory. They bow their heads and point their beaks at the ground, then pipe loudly while walking and flying around the area. The display often attracts other Oystercatchers so that half a dozen birds may eventually run along side by side in a line or fly around in a tight flock while calling loudly - "kleep kleep, kleep kleep."

"Piping" Oystercatchers
Other sightings. 6 Tufted Duck, 4 Little Grebe, 1 Little Egret, 4 Pied Wagtail, 36 Wigeon, 65 Teal, 8 Redshank, 2 Curlew.
I was out in the new car this morning, giving it a run because due to lockdown it has been hardly anywhere for weeks. 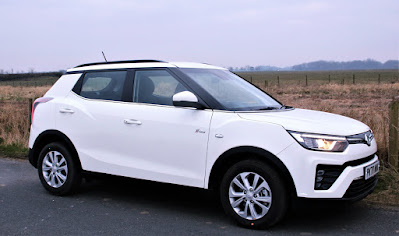 Ssangyong
“What is it?” you say, just as many others have done. It's a Ssangyong Tivoli 1.2 Ventura, of much the same size and with similar performance to my old 1.6 Suzuki Vitara. The difference is an equivalent Vitara today is about four grand more than this Ssangyong. This comes with half leather heated seats and heated steering wheel for the winter days together with a few more bells & whistles like keyless entry and cruise control.  A 7 years warranty! - well recommended.
And here's a heads up for the suppliers, Barker's of Preston . Thanks guys.
Another heads up for my pals Wally and Gini over in Florida. They sent me a virtual coffee. Take a look at Wally's blog – blue sky, birds, bugs and alligators at Our Natural Places Florida
Cheers guys. Enjoy all that sunshine but look out for those harmless alligators and friendly snakes. No such problems here in occasionally sunny Lancashire.
Linking today to Eileen's Saturday Blogspot and Anni in Texas.
The weather for this weekend looks very poor. Unless something should change it seems like it will be next Tuesday or Wednesday before I can post more news on Another Bird Blog.