That's correct friends. This is a Blog One Get One Free offering to rival Tesco's Finest. Two posts in one at no extra cost to yourselves, even though no one has yet bought me a coffee (see RH column).
I ran out of time to update the blog from Thursday's ringing session at Gulf Lane and because Andy and I arranged to go again on Friday, I combined the two days into one post. The direct comparison between the two mornings of similar weather conditions and each morning's birds is I hope, quite interesting.
Thursday morning saw a a slow arrival of Linnets in ones, twos and fives until a couple of maximum counts of about forty birds. After Tuesday's catch of 14, another catch of 14 on Thursday saw no recaptures nor a single recapture from this or any other winter, a recapture rate of lots of noughts, very close to zero.
It meant that Thursday's 14 Linnets were all new to us - 2 adult male, 2 adult female, 4 first winter female and 6 first winter male.
Male Linnets have begun to sport some colourful if patchy colouration where their old feathers wear to reveal the ruby red that attracts a female to their patch. 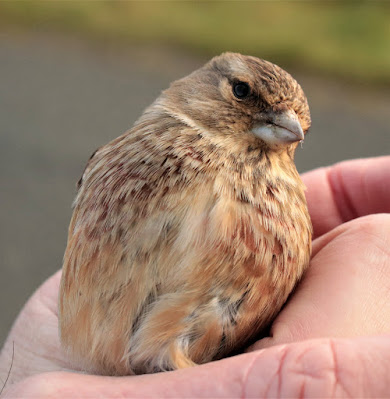 Male Linnet - February
We failed to catch either of the 2 Stonechats that appeared around 0730 and spent the rest of the morning parading along the fence line without showing more than a modicum of interest in the catching zone.
Likewise the three or more Skylark overhead and two Reed Bunting that frequented the patch of bramble that lines the ditch. We now have the Skylark territories mapped in our heads, areas that are familiar to us and obviously to the birds. These fairly small areas are the same as last year and the one before that and the one before that .......
A male Sparrowhawk visited twice, drawn in by the sight of the small Linnet flock. For a while it sat on a fence post 50 yards away before it sped off across the field. It returned an hour so later where it made an unsuccessful pass at a small group of Linnets before it again examined the scene from a post some forty yards away.  If only that 600mm lens had a little more reach. 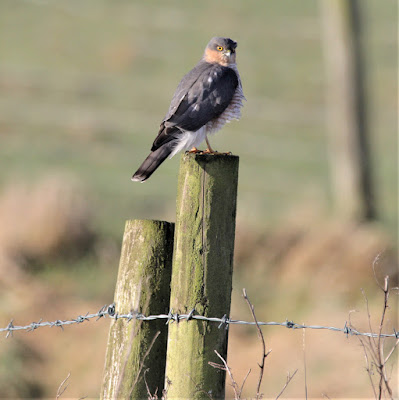 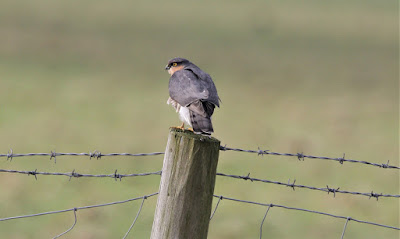 Sparrowhawk
===================================
Friday began with  another early of toast, blackberry jam and a large mug of brown tea. Just the job for the promised zero temperatures at the meeting point with Andy at Gulf Lane. Cold it was at minus 2 degrees but with a promise of warm sun once the frost cleared.
Pretty quickly it became apparent that fewer Linnets were arriving to feed. Clear overnight weather may have led to a departure north and our best count of 20+, reflected in the catch of just 2 Linnets.
We kept our options open and caught a few of the other species around - In addition to the two Linnets we caught 2 male Reed Buntings, a female Skylark and a first winter female Stonechat. So although we added little to our total of wintering Linnets, we enjoyed seeing other species that aren't caught too often.
There was just the one Stonechat around this morning. The last two weeks has seen a strong migration of Stonechats at local birding sites. We suspect that the closely aligned male and female of Thursday departed overnight to be replaced by the single female we caught. 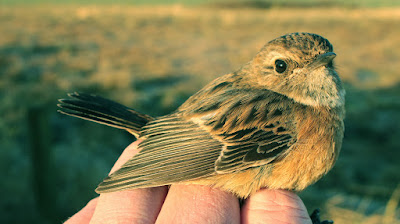 Stonechat
The single Skylark caught was a female, the deciders a wing length of 101 mm and a hint of the start of a brood patch ready for the spring and summer. We counted at least five Skylarks this morning. There was both chasing and singing as the larks sort out their respective territories. 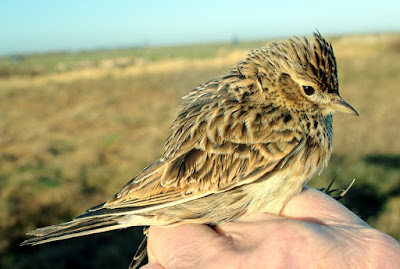 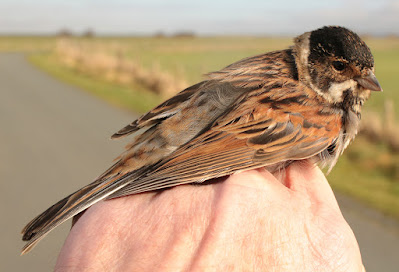