I had my final ringing session of the season at my Hodder Valley feeding station at weekend. It wasn't definitely going to be the last, but I had a good idea it would be. Conditions were perfect for ringing with full cloud cover and it was calm, but it would seem that the birds didn't know this!
I ringed just seven birds as follows (recaptures in brackets):
Goldfinch - 2
Coal Tit - 1
Chaffinch - 4
Great Tit - (2)
As usual between net rounds I was serenaded by Song Thrush, Mistle Thrush, Chaffinch, Robin, Great Tit, Goldcrest, Chiffchaff and Siskin. I'm not sure that Siskins do any serenading, as they have quite a harsh and metallic song, but it was good to hear nevertheless. The singing Chiffchaff was my first summer migrant of the year.
I've had a couple more moth trapping sessions in my garden and over the past two days I caught just a Hebrew Character yesterday, and a Hebrew Character and Early Grey today. 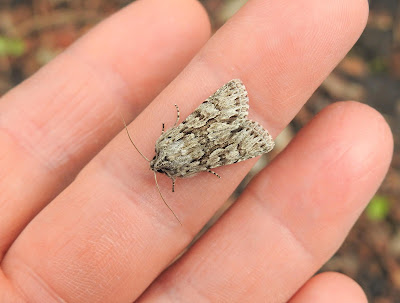 Early Grey
This morning I headed to the pools at the Obs to see if it would be possible to get a couple of nets up in the 'drier' area of scrub. There was an awful lot of water in the pool, and I could see that it would be a few weeks before we could get to our main ringing area. However, from the car park the drier area of scrub looked like it could be accessible. I walked round to where you can look down on this area, and it was, err..., very wet! So that was that plan scuppered!
Later in the week I am going to pack my feeding station up in the Hodder Valley and select a couple of net rides in some open scrub/young woodland that I can use until I can get into the pools at the Obs. The area I have in my mind looks good for warblers, and perhaps calling down a few Lesser Redpolls, Siskins etc. I have also seen a Bullfinch or two in this area over the winter, so I am looking forward to giving it a go.
Back to this morning, and whilst I was checking on the very wet, drier area of scrub, I spent half an hour wandering round doing a bit of birding. There are three pools at the site, and over all three I counted 46 Herring Gulls, 13 Lesser Black-backed Gulls, three Little Grebes (there were more), four Mute Swans, 15 Coots, two Great Crested Grebes, two Canada Geese, nine Mallards, 22 Tufted Ducks, a male Shoveler and two Greylag Geese. 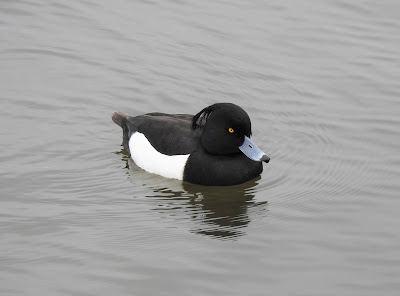 Tufted Duck
A couple of Cetti's Warblers were singing, as was a Song Thrush, a Skylark and three Reed Buntings. A female Sparrowhawk caused a bit of chaos as she flew over the scrape, and that was that.
On my way home I had a quick look in the cemetery to see if there were any grounded migrants, and there was just two Goldcrests.
I have got a penultimate visit to one of my wintering bird survey sites tomorrow, and the wind is going to be southerly, so perhaps there might be a migrant or two.