Last November I posted here on the blog a record of Coal Tit ALJ4344.
“The Coal Tit is known as one of the most sedentary species of Britain and Ireland whereby ringing has shown that very few Coal Tits travel distances from their natal area. Strangely enough it is Coal Tits from the North West of England that travel furthest from the average of just 20km between seasons. This is thought to relate to the distribution of suitable habitats between the north west and other regions. (BTO Migration Atlas).
The recovery of Coal Tit ALJ 4344 ringed at Oakenclough on 21 July 2020 was one of the very few that Fylde Ringing Group has received in many years and 1120 captures of Coal Tits.  When we caught ALJ4344 on 21 July 2020 we confidently aged it as a juvenile born just several weeks before. The yellow cheeks alone were a dead giveaway. 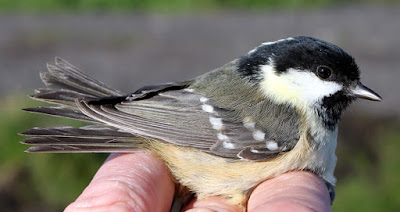 Coal Tit - autumn juvenile
We did not see ALJ4344 again during the summer and autumn of 2020 during many visits to Oakenclough. It was later in the autumn when notification arrived that ALJ4344 had been recaptured other ringers at Hoylake Shore, Wirral, Merseyside on 16 October 2020.  At 67km from Oakenclough this represents quite a southerly migration for a Coal Tit, and an example of autumnal movements more likely to be undertaken by first year birds than by adults." 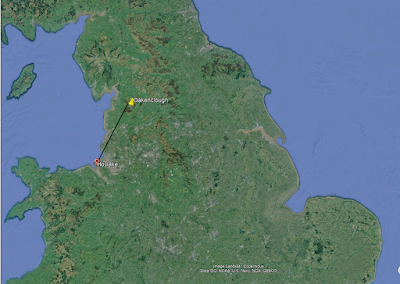 Coal Tit - Oakenclough to Hoylake
"The south-south- west direction of travel might suggest that this Coal Tit was on its way to the extensive conifer forests of North Wales (see map) where it would join up with others of its kind and prove able to survive the winter.”
=============================
Quite remarkably, and now in March 2021 comes another Coal Tit that made an almost identical journey - ALK0174.
So noteworthy is this latest record that it prompted a query from a BTO staff member as to whether we had made a mistake with reading the ring number on 20 March! We always double check unfamiliar ring numbers by reading out aloud and then verify the number on the field sheet we use.
Coal Tit ALK0174 was first ringed at Bidston, Wirral, Merseyside on 1 February 2021. Just 47 days later on 20 March 2021 we recaptured ALK0174 at Oakenclough.
This was the morning when Andy and I caught nine Coal Tits, including ALK0174, found in a mist net alongside five other Coal Tits, a small party of newly arrived birds, amongst a catch of other migrants. 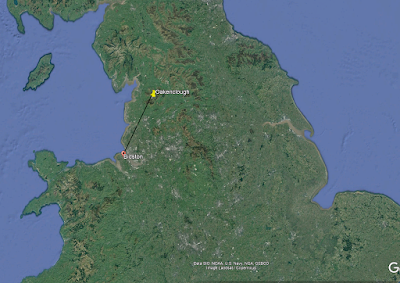 Coal Tit - Bidston to Oakenclough
Experienced birders and ringers know that on migration Coal Tits use their highly distinctive call to maintain contact with other migrating Coal Tits.  Some ringers use play back calls of Coal Tits so as to encourage the species into mist nets. Almost certainly our six Coal Tits had called each other into catching themselves in our net without any help from us.
On suitable occasions of migration and weather conditions it is possible to catch dozens of Coal Tits. We do not use calls to catch more Coal Tits, the danger being that the Coal Tits bring large numbers of other titmice (great, blue, long-tailed and treecreepers) with them into our mist nets, a time consuming process that prevents the catching of species that generate  superior data. 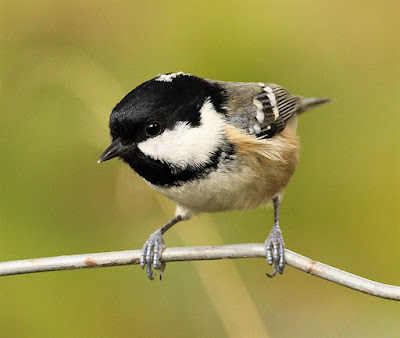 Coal Tit
However, we may have to rethink our policy of not catching of too many titmice if we could limit such catches to Coal Tits only. The two records above appear to show that Coal Tits from some parts of NW England undertake autumnal journeys in a south westerly direction into Wales where the shelter and food abundance of conifer forests may afford them a better chance of winter survival.
More records from us and other ringers could add to information while supporting these two findings.
=============================
Earlier in the week I was at Knott End to see the first Chiffchaff and see the first Sandwich Tern of the year - on it's way to Scotland I guess. 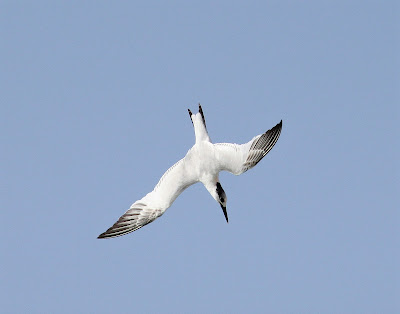 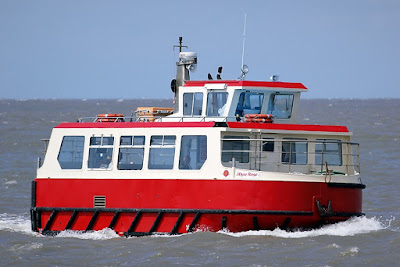 Knott End to Fleetwood Ferry
Just the photos to link to Rain's Thursday Art Date and the theme of "Motion and Movement" don't you think?