It was a bit of a push getting up at 3:30 yesterday morning, and this morning at 5:00 a.m., although compared to yesterday, today I had a bit of a lie in! The bit of a push in my blog title refers to the push of spring migrants that was evident the day before. It wasn't a big push, as it can't be at this time of year, but a push it was nevertheless.
I was in Northeast Lincolnshire yesterday morning on the Humber Estuary again, and it was a lovely clear morning with a light south-westerly wind. The southerly wind was warm, and responsible for a movement of birds. A phone call from Ian as I was getting out of my car, and the first singing Chiffies of the morning were registering, told me that he had just had a stonking male Ring Ouzel on the golf course back at the Obs in Lancs. I must admit, Ring Ouzel was on my radar this morning, but it wasn't to be.
As I headed off through the scrub towards my VP, I recorded a total of three singing Chiffchaffs. New in at the site was a singing Cetti's Warbler, and it was very vocal with its explosive song. Whether it was a migrant, or a returning breeder I'm not sure, but I'll find in a few weeks when I complete the first Breeding Bird Survey (BBS).
Other summer migrants were in the form of two Swallows that headed northwest, following the edge of the estuary, and a female Wheatear perched up on the sea wall. Wheatears certainly do like sea walls.
It was definitely a vis type morning, in fact more of a vis than a grounded morning, and I'll cut straight to the chase with my totals as follows (all between northwest and northeast); 490 Pink-footed Geese, 35 Woodpigeons, three Jackdaws, three Carrion Crows, the aforementioned two Swallows, 28 Meadow Pipits, a Chaffinch, four Goldfinches, three Siskins, 26 Linnets and a Lesser Redpoll.
As I mentioned before, there is plenty of scrub on site, some wet, some dry, some open, and as a result it provides good nesting habitat for a number of species, like the five Skylarks, a further 13 Linnets, a pair of Yellowhammers and ten Reed Buntings that I recorded.
Raptors were represented by a male Sparrowhawk and a female Kestrel, and it was the first time out of six, that I didn't see or hear a Buzzard.
Six Roe Deer were present, and I think I have recorded them on every visit. I suspect that as there is no access to the site, they are a little more confiding than they usually are. A Fox was a first for me for the site, and the vixen sat soaking up some warming rays from the early morning sun. As soon as I moved though, she was off. 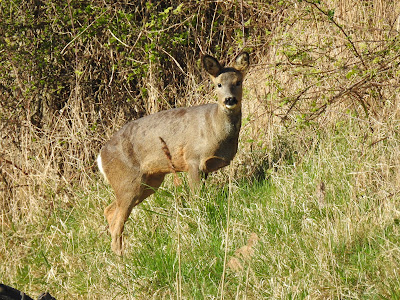 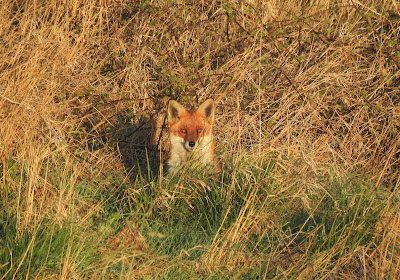 I don't see a huge number of Brimstone butterflies in my travels, so it was a pleasure to see a male moving along the sunny south side of a hedge. Unfortunately, it was a little too quick for my limited photographic skills!
This morning, as I mentioned before, it was another earlyish start, but not terribly early, and I headed to my ringing site in the Hodder Valley in Bowland, and put a couple of nets up in the arboretum. It was a bit of an experiment to see whether I could catch in this area, which species, and whether it was worthwhile.
On my first round I caught a male Blackcap with a fat score of 40, which means it was carrying quite a bit of fat and had a way to go yet on his migratory journey, a Chiffchaff and two Goldcrests. Not a bad first round I thought, but that was it other than a Song Thrush recapture. So, it was a success and a bit of a failure at the same time I suppose, but I was probably there on the wrong day, as there had been a bit of a push the day before, and the wind was northerly. A quick call to Ian on the coast confirmed that it was quiet there too, so I'll head back in the next day or three. 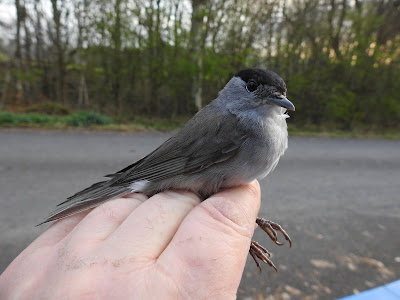 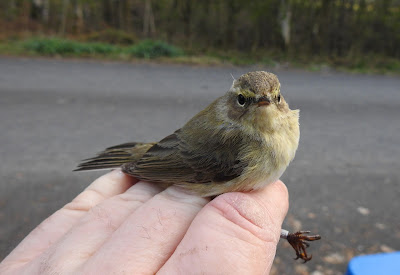 In addition to the ringing, I did have a few bits of pieces in the form of two singing Song Thrushes, two singing Chiffies, a singing Goldcrest, a singing Mistle Thrush, a Siskin over, two Jays, a drumming Great Spotted Woodpecker, a Buzzard, two Coal Tits, two Lesser Redpolls and a female Sparrowhawk.
No early start for me in the morning, as it's a beer night tonight!