A shot of Ouzo makes a fine nightcap - for a while. I slept a deep sleep but woke up early perhaps knowing that the forecast was OK, too breezy for ringing but fine for a spot of birding.
I set off north to a couple of places to check out for the coming weeks.
Chris had told me how in the winter he worked with the digger at the face of the Sand Martin colony to try and make access somewhat easier for the ringers and if possible to improve the catch rate. He'd done a pretty good job and constructed a ledge where we can set nets some eight foot higher than the quarry floor of last year where we had no luck with the martins.
I counted 130+ excitable Sand Martins crowding around the holes they used last year. In the photo below you can see how nest holes are excavated in a layer of softer sand and gravel, immediately below the larger and harder pebbles of the quarry face. The martins know the best places in which to nest but nature doesn't always cooperate with them when the holes may be weakened or even destroyed by the elements. 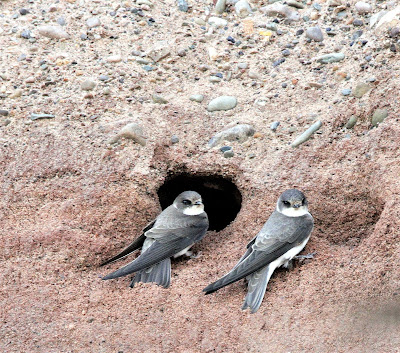 Sand Martins
The water levels of the pools are extremely high after an autumn and winter dominated by rainfall. Even with a dry spell it is unlikely that water levels will drop sufficiently or quickly enough to allow the return of the Avocets to breed this year.
Even the Oystercatchers seemed reluctant to pair up this morning, their one or two likely spots still covered in winter rain puddles as they face into the stiff breeze.
The picture below shows three ages of Oystercatcher. The all black one with bright pink legs and bright red eyes is an adult, the one on the right with partial collar, paler bill and greyish legs is last year's bird. The Oystercatcher at the back still has the grey legs of last year and a less bright eye and is probably a month or two older than the right hand one, but not a full adult. 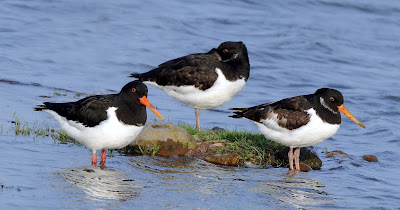 Oystercatchers
The Sand Martins will be left to breed now.  Only when we know for sure that their breeding season is well underway will we return to ring some if the new setup works in our favour.
I drove further back towards Pilling to look at another of our ringing sites. A real surprise came in the shape of a fine male Redstart, a scarce enough species in these parts where it is a spring and autumn migrant only. To see a Redstart is nice enough but to see one on the exceptionally early date of 1 April was quite unexpected. 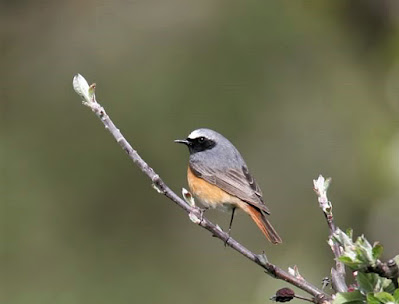 Redstart
Buoyed by this unforeseen event, and carrying a bag containing trap, meal worms and A rings I took a walk along the sea wall in the hope of seeing a Wheatear or two but there were none.
By now the stiff breeze had turned to a cold easterly with mostly waders and herons seen - 6 pairs of Oystercatcher, 7 Redshank, 4 Lapwing, 6 Little Egret and 1 Grey Heron. 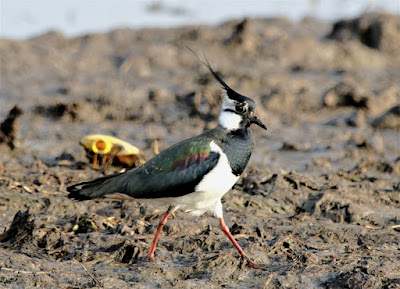 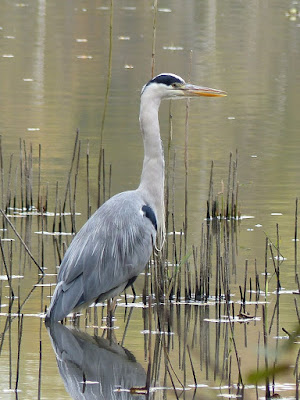 Grey Heron
Smaller birds found were 12 Skylark, 8 Linnet, 2 Pied Wagtail and 1 Meadow Pipit.
Things are looking better for Skylarks this year along a stretch of breeding habitat that was subject to disturbance last summer from The "Environment" Agency; very slowly, over many days, clearing tidal debris from the sea wall with huge, lumbering noisy machinery. Unbelievable!
Stay tuned.  There could be more news and another early start soon on Another Bird Blog.