Searching through my records of April Stonechats since 2006. I found little has changed over 15 years, although 10 Stonechat on Hawthornthwaite 10 April 2006, 9 on Harrisend 5 April 2007, and 8 on Clougha/Birk Bank 21 April 2008 were decent peak spring counts. Thereafter, numbers only reached counts of no more than four birds in the month of April in the two years 2007/9. Two years of severe winter weather then saw the decline of a decade of growth in upland breeding and wintering Stonechats, from which - according to my records - they never recovered.
My latest visit to Harrisend had me finding 5 Stonechat, probably three pairs on territory to date. Also to note, at least 28 Meadow Pipit, 3 Wren, 2 Red Grouse, 2 Raven were foraging on the ridge, a Kestrel, and a Brown Hare. As I got back to the car, 2 Greylag were overhead loudly cackling before doing a U turn.
As I arrived at Hawthornthwaite, 2 Greylag flew east, when I got back to the car again two hours later, 2 Greylag flew west, all a little coincidental. I found a pair of Stonechat here, 5 Meadow Pipit, 2 Red Grouse, a Buzzard, Kestrel, a Curlew presumably on territory, and a Skylark which I don't recall ever seeing here before.
On the way back to Lancaster, I called in at Street Bridge for a brief look for the Pied Billed Grebe, with no luck, but did hear my first Chiffchaff, and a Song Thrush was nice. On Sunday, 4 Swallow over and around the canal in the Deep Cutting area, were the first of the year for KT and myself.
The Blue Nailed Hawker.
I'm looking forward to the season getting underway. Maybe if I get myself off to somewhere like Birk Bank, I might find an early April Large Red Damselfly over the bog to confirm it's already underway. 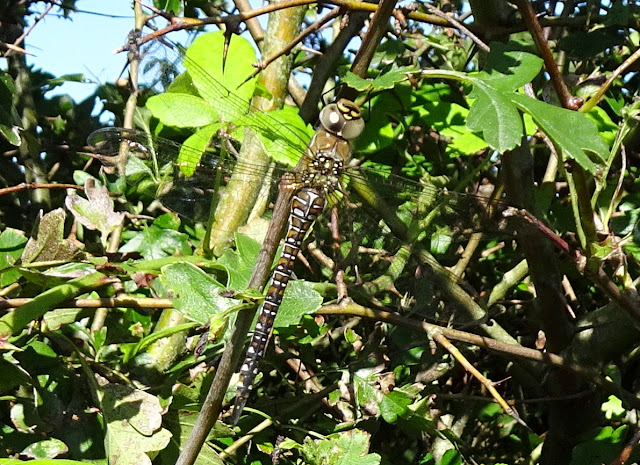 Female Migrant Hawker. Pete Woodruff.
Coming across my record of 54 Migrant Hawker seen in little more than one hour along the canal between Glasson Dock and Conder Green on 19 September 2019. I subsequently found this photograph of a female Migrant Hawker taken in August 2020. Although not the best of images, it clearly shows a distinctive 'blue nail' on S2. 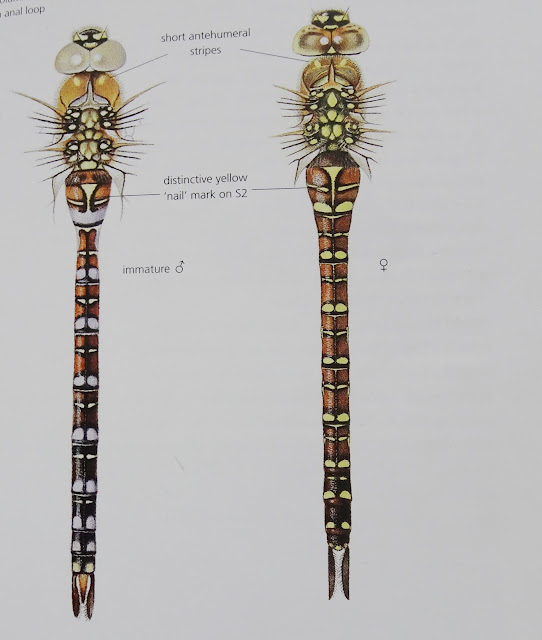 I was puzzled by my 'blue nail' photograph, the mark should be a distinctive yellow. So, off it went for expert analysis which came up with some interesting explanations, 1) because this was an immature female, the yellow isn't very bold yet, 2) field guides can't illustrate at every colour stage, 3) colours can change with temperature. Mmmm....Learning something every day! 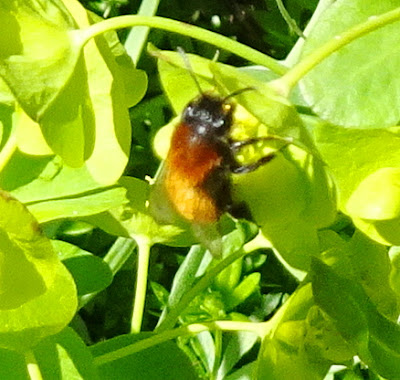 Tawny Mining Bee Andrena fulva. Pete Woodruff.
Smart little bee on Euphorbia in the garden yesterday.
Unconnected to the post, but an excellent and much appreciated image of the Avocet by Martin Jump.