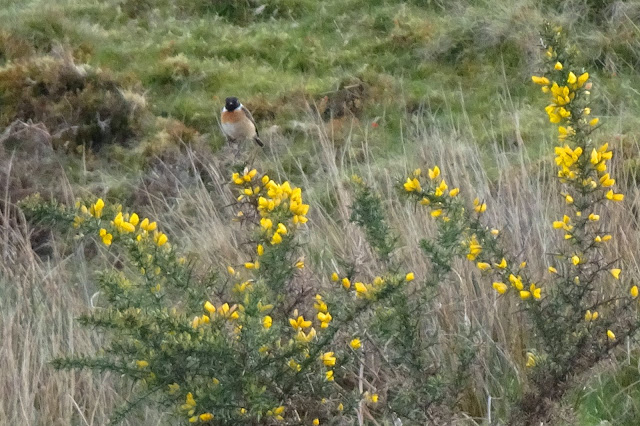 Stonechat Harrisend. Pete Woodruff.
I found 7 Stonechat on Harrisend, on what turned out to be a bit of a fellside fest. The chats were seen as two pair and three male, I reckon possibly five breeding pairs on Harrisend now, but I'll be back for more clarity on this in the coming weeks. Also in a three hour spell on Harrisend, 9 Meadow Pipit, 5 Willow Warbler, 5 Raven, 4 Wren, a Buzzard and Kestrel.
View Full Screen

I never thought I'd have to wait until early May to find my first Wheatear of the year, not as a migrant on the coast, but on a fell in Bowland. Also 2 Cuckoo heard, one from a distance at the east end of Harrisend, the other as I returned to the motor, heard somewhere west in the Grizedale Valley area. Last year was a good year, when I found 9 Cuckoo, all in Bowland.

A brief visit to Hawthornthwaite didn't seem to be going to serve much purpose in the time I was able to spend there, but I did find 2 male Stonechat, 2 Wheatear, and 2 Wren. There was 3 Sand Martin flying around Catshaw Grieve. I've no idea what these birds are doing here this year, there's no sign of any nesting activity here, nor at Cam Brow yet as I see it.

A little local interest at Williamson Park, where I found a Little Grebe on the old hospital reservoir at Fenham Carr. The grebe's were here last year, when they were seen as a family group of two adult and five young on 6 July. Also on the reservoir, a pair of Tufted Duck, seen as a first here. 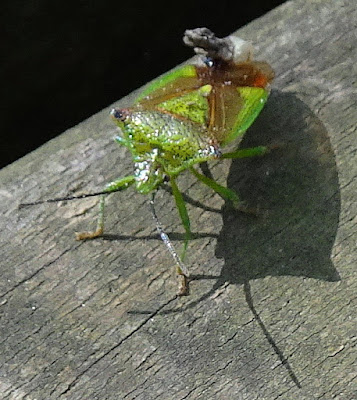 I found this Hawthorn Shieldbug on a bench in the woodland, difficult to separate from Birch Shieldbug in this image. The bug has something attached to its rear end which puzzles me. I couldn't make much out of it at the time, my best guess was a piece of grit off the track, but that somehow didn't seem feasible to me, and the pik isn't in focus and doesn't help.

I'm reliably informed of a pair of Mandarin Duck on the River Hindburn in Wray last week.