I was off to Bowland again during the week, hoping to get something conclusive, in the main about flycatchers, sandpipers, and wagtails, in the area Marshaw-Tower Lodge-Trough Bridge.

Once again it started well, with 7 Common Sandpiper seen, two pairs were at Marshaw on the Marshaw Wyre, one upstream from the bridge to the Hawthornthwaite track, and one downstream. Both pairs had a bird alarm calling with their drawn-out whistling note 'heeeep'...View the videos Full Screen.

This was the upstream bird....

This was the downstream bird - also in the header image - which bore a metal ring on its right leg, and was accompanied by a chick below it in the long grass. In the plantation behind this Common Sandpiper, I had found a female Redstart on 27 May, today I found evidence of breeding here when I saw a juvenile Redstart, initially perched on the perimeter fence post, then flew into the plantation.

Five Pied Flycatcher seen, a pair in the woodlands on the west side of Tower Lodge are feeding young in the nest box. A female was seen constantly in and out of the branded FOBMG nest box at Trough Bridge, with no male seen in thirty minutes here. I watched a pair moving on a circuit through the trees in a 45 minute stakeout east above Trough Bridge at the track to Winfold Fell, I had a feeling they had young around, but saw none despite the super mobility of these two birds.

To my knowledge there's just one pair of Spotted Flycatcher this year per Howard Stockdale. This is grim news for an area previously known as a stronghold for the species.

A better result than previous, when I found 8 Grey Wagtail on the Marshaw Wyre, but no evidence of breeding with no young seen.

I've yet to find a Dipper this year in this area.

I counted 8 House Martin nests this visit at Tower Lodge, all seemingly occupied. 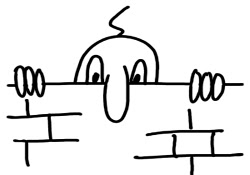