On the ELOC website last year, I found records of an impressive 25 Stonechat seen on and around Hareden Fell on 28 May 2020.

Like anywhere with Bowland included in its place name, I have a particular liking for Hareden, and lets face it, when you take in the panoramic view of this bracken carpeted valley and moorland, it's the perfect habitat for the Stonechat. In reality you should be able to find dozens of breeding pairs of Stonechat at places like Hareden in the Forest of Bowland.

As I walked up the road towards the start of the route up Hareden, I had good views of 2 Blackcap, and a Dipper and Grey Wagtail on Hareden Brook. I had no sooner got on to the grit track, when a Merlin flew out of the undergrowth and out of view over the ridge, seconds later, a dread of c.20 Meadow Pipit joined 2 Swallow in the air over the ridge.

On this visit, it took me 2 hours to find the first of 6 Stonechat eventually seen, including a pair with two young. Whilst watching this family group, the female with one young was joined by a Willow Warbler, soon followed by a stunning male Redpoll, all in the same small tree, a good three species pik but too far away. Other notes were made of 3 Wren, 2 Reed Bunting, and a Dunnock.

A Peregrine Falcon was heard harsh and persistent, alarm or contact calling to another one heard, a kestrel was also seen later. Butterflies, 16 Small Heath, and a lone Red Admiral.
On my way home, I called in above Trough Bridge, to find the 15 June Pied Flycatcher pair busy as ever again, and another female further down the road and still feeding young in a nest box. Later, I caught the glimpse of a Jay flying off, and a Grey Wagtail was on the Marshaw Wyre. At the plantation at Marshaw, I finally found a Spotted Flycatcher, if this bird has a mate, they would be only the second of two pairs in the area this year. I also heard a singing male Blackcap here, and 3 Song Thrush seen. 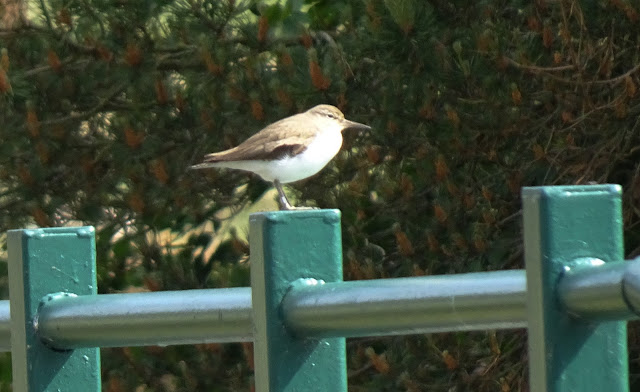 And got another pik of the metal ringed Common Sandpiper at Marshaw.
Tarnbrook Stonechats. 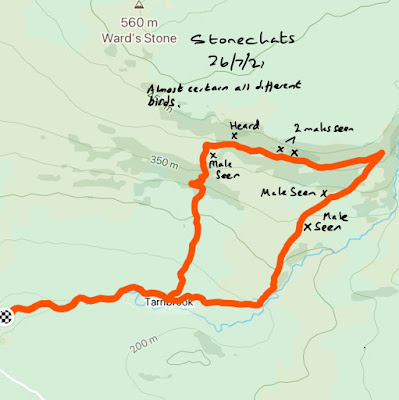 I was grateful for the news and map of 6 Stonechat seen on a circuit on Tarnbrook yesterday. This is an area I've yet to explore, but I reckon this is about to change soon.
Garden Events. 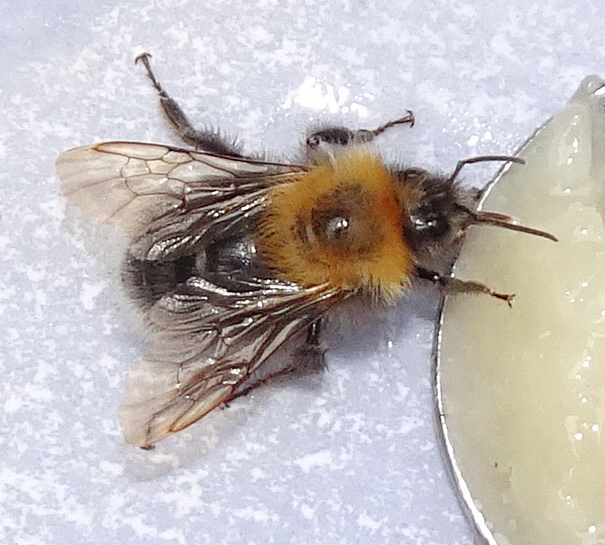 This Tree Bumblebee initially appeared to be on its last legs, but as seen in the pik to be taking a drink of honey we offered it, it eventually flew off. 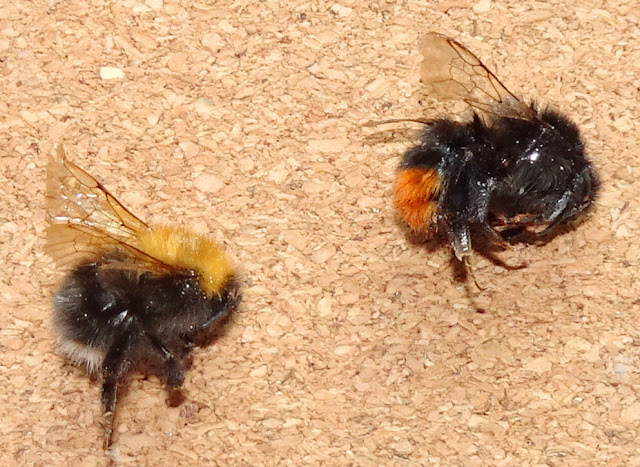 The Tree Bumblebee and Red-tailed Bumblebee, were found dead on the front lawn. The Red-tailed had what appears to be a sticky shiny substance on its side and leg. On a forum I was asked....'are there are any Lime trees in the area? as some non-native Tilias can be toxic to bumblebees'....There are Lime trees at the University of Cumbria, but whether they are non-native toxic I wouldn't know. 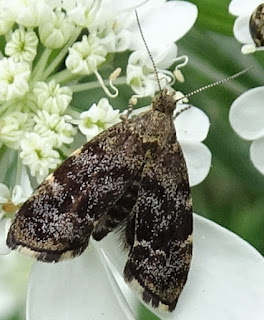 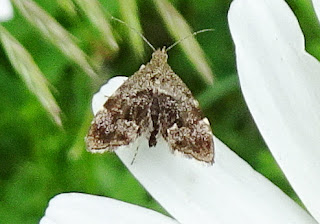 The Nettle-tap micro-moth above left in our garden, can only be regarded as 'similar' to the one on the right which I saw recently elsewhere....Why the variation?
A stunning male Greenfinch was in the garden yesterday, but a Jay was even more remarkable here the day before. We also have two 'new' juvenile Blackbirds.
Thanks to Howard Stockdale for the image of the Spotted Flycatcher, only one of three this year to my knowledge, a look through my records revealed 12 Spotted Flycatcher in this area in June 2018.