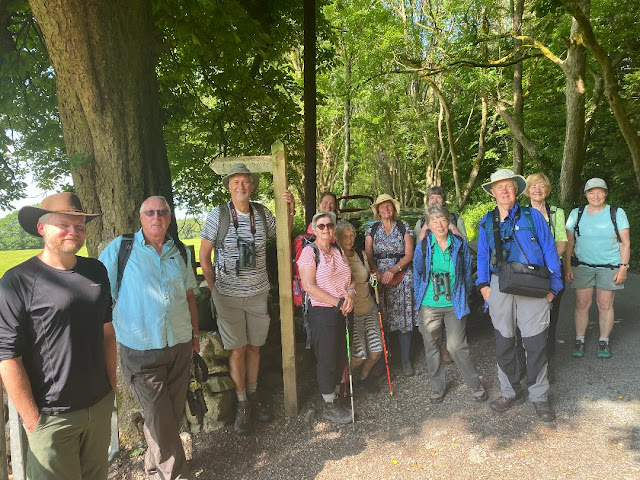 (Please click over the photo to enlarge)
Photo: Members of the Arnside Naturalist

It was great meeting up with members of the Arnside Nat which included many old and new friends.

The day was arranged for us to visit the orchids and other nice plants we could find on the sides of Burton Fell and Lancelot Clark Storth. It could not have been better in regards to our butterflies, lots of emergence had took place, probably on that very morning which included for the first time this year, Dark Green Fritillaries (several), Ringlets, Graylings and Meadow Brown. We were also fortunate to see Small Tortoiseshell, Red Admiral, Speckled Woods, Common Blue, Small Heath, Small Pearl Bordered  Fritillary and Large Skipper.

We toured some of the broken pavements in search of Dark Red Helleborines and Broad Leaved Helleborines, of which lots were found, although the majority of the plants had not actually come into flower, the delay to the norm was that the plants had not received enough water during their early build, although it is hoped that things will be OK now that we have had some rains and they seem to be progressing nicely. Still we did see a few which had odd flowers opening.

When it came to the Broad Leaved Helleborines we saw plenty of superb specimens which looked really good and it was obvious they were going to be really good spectacles when the time arrives.

The ferns were everywhere especially the Rigid Buckler Fern and the Limestone Fern (or limestone polypody), we also had the Wall Rue, some rarer Ceterach (Rusty Back Fern) plus Hard Shield Fern, Harts Tongue Fern and of course everyones old favourite Bracken.

After lunch we made our way over to Lancelot Clark Storth and it was great to see the Hypericum montanum (Pale St. John's Wort). We also had the remains of the rare Angular Solomons Seal although you could see were the larvae of the sawfly were there in attendance attacking the leaves and before long all you are left with is a "skeleton" of the leaves.

Although the birdlife is usually busy, only odd birds were noted today which included: Chiffchaff, Willow Warbler, Green Woodpecker, Whitethroat.

Also it was mentioned that members would have liked to see how the pavement looked from a drone and I referred to a piece we did with Granada a couple of years ago which I have now dug out of the archive for you.  If you do want to check it out please click here (please turn your volume on for this feature)

Although the orchids were not in flower, the following PHOTOS ancient as they are gives you some idea of how they have looked in past years or the way we hope they will turn out over the coming weeks.

They are just a few examples from what I stopped at and we talked about on site yesterday.

Starting off with 33, its one of the plants I have always queried against hybridization, but is special in that it is a bicolor but also in the fact that it does have a white epichile (lip) 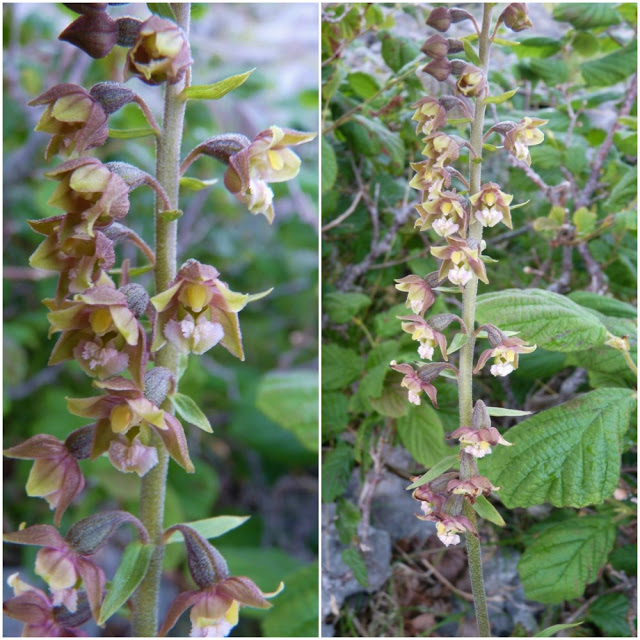 We later moved over to Specimen 66 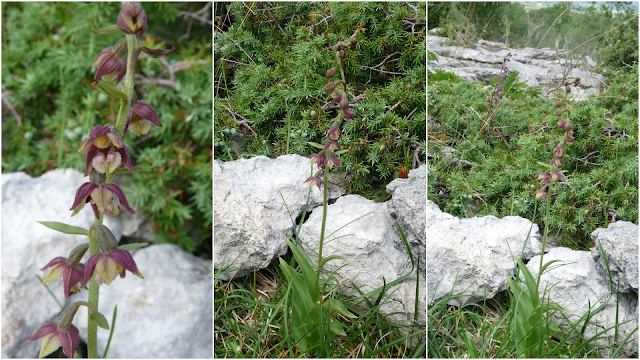 This was the plant which I said as very special in that it was the plant used for the studies of the "bicolor" papers and that you may note it is a atrorubens (dark red helleborine) yet with a light green stem and note the sepals and petals which are red with yellow petals (=bicolor) also of note is that the epichile (lip and bosses) are of a cream colour rather than a red.

We moved over to check out a special "Pallens" variety 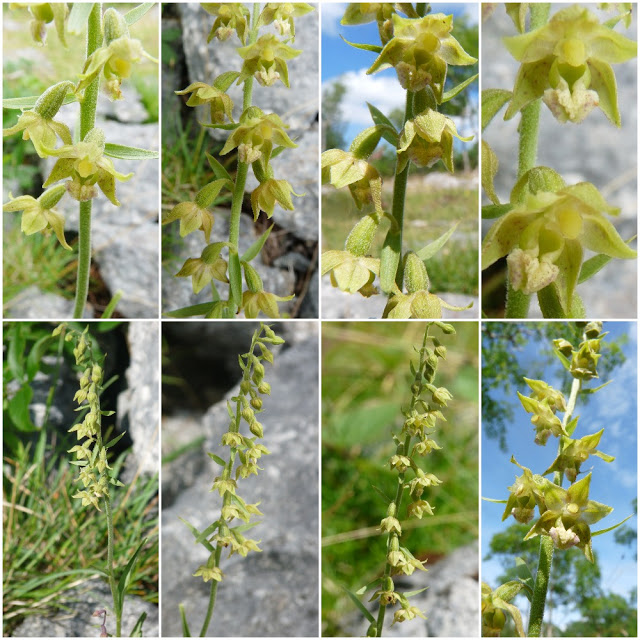 then just a little way past this splendid specimen we saw the fabulous "Escarp 13" which is a bicolor and possibly a hybrid as well. 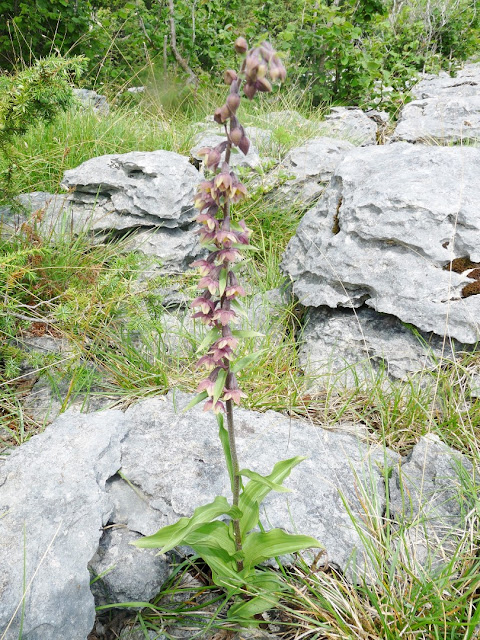 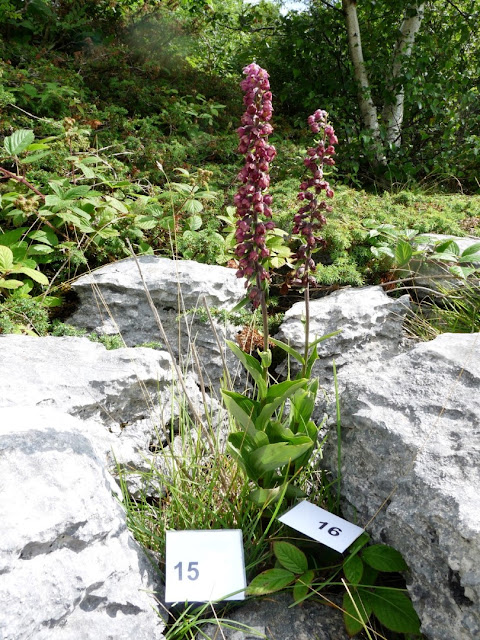 and we also checked out 15d which is the one I said had 62 flower buds in its heyday.... 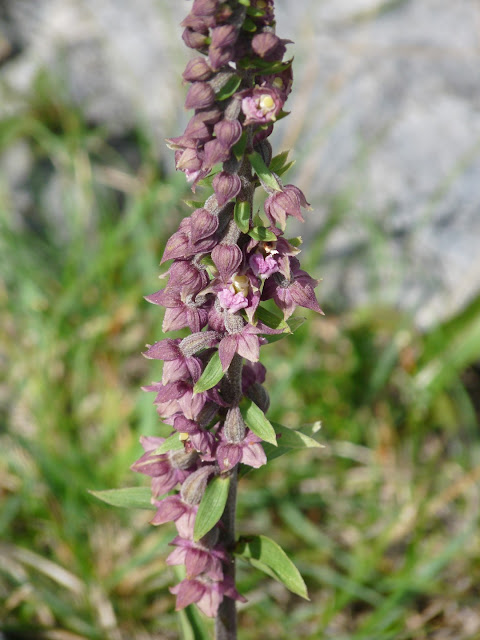 We then went over to see varigated no. 1 (below) 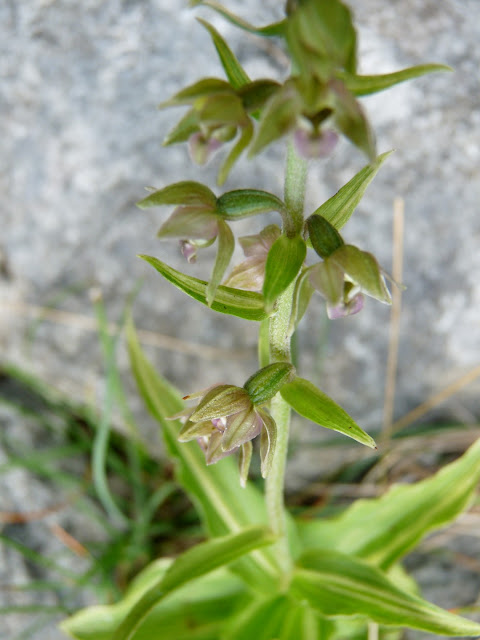 This is just a few of what we had yesterday, but if you want to check out the full list of the plants we have please click here and scroll down.

also today we had the following: 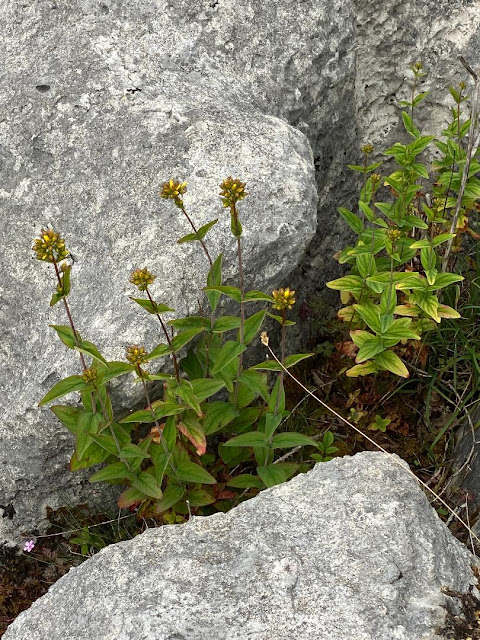 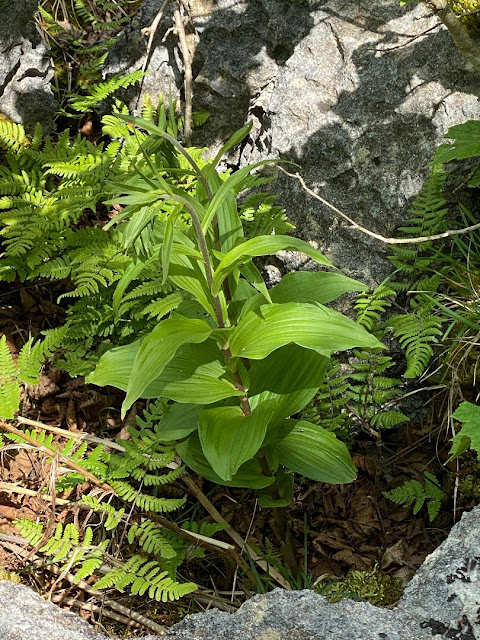 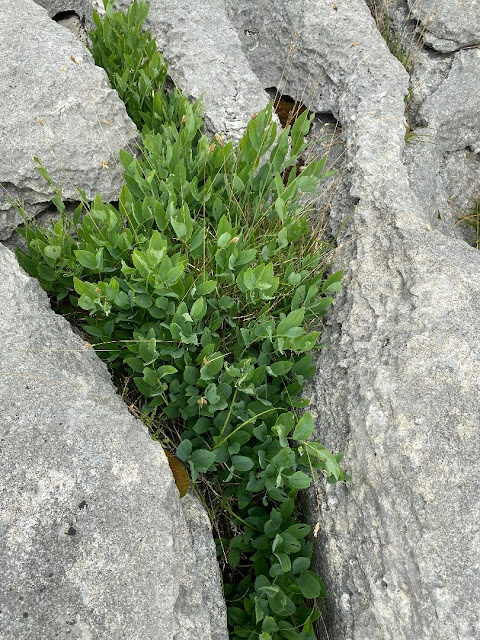 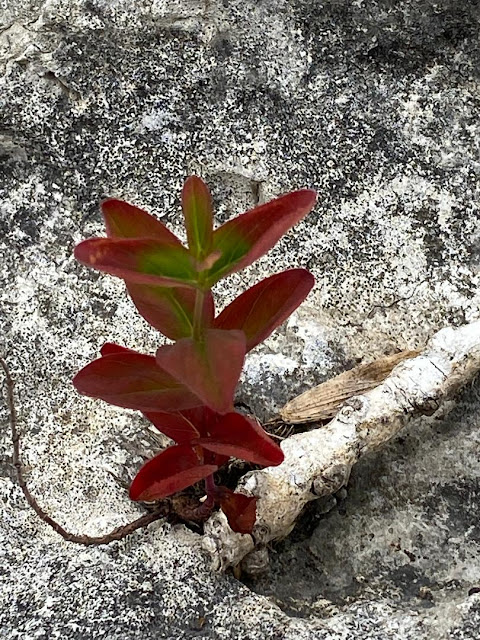 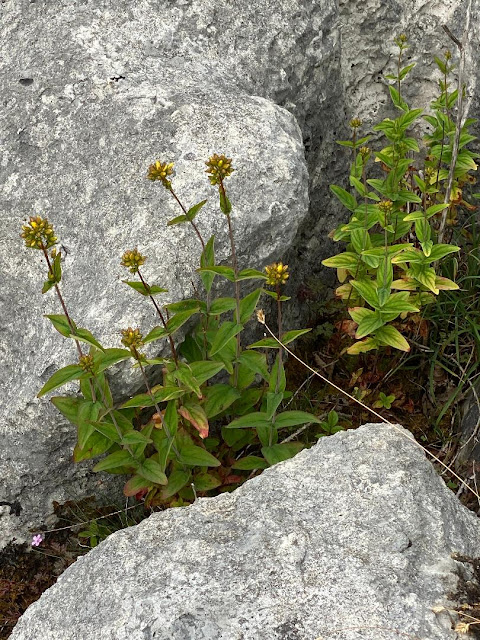 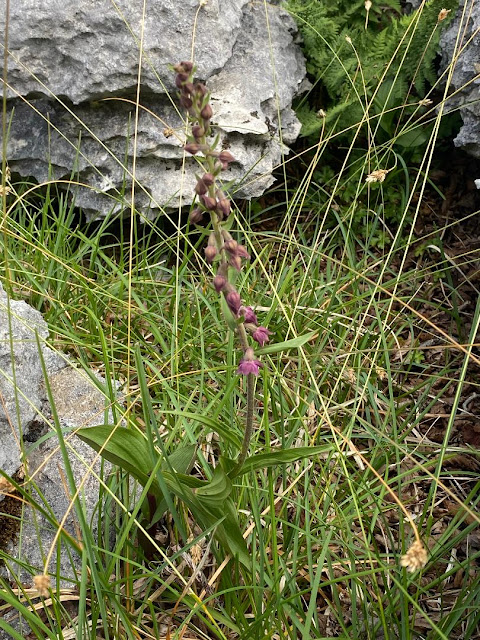 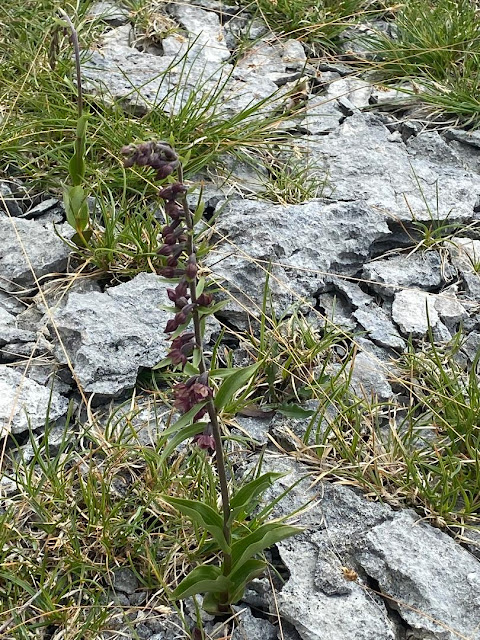 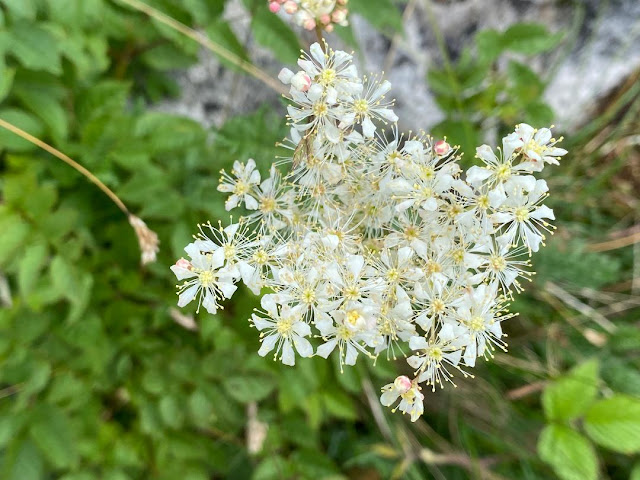 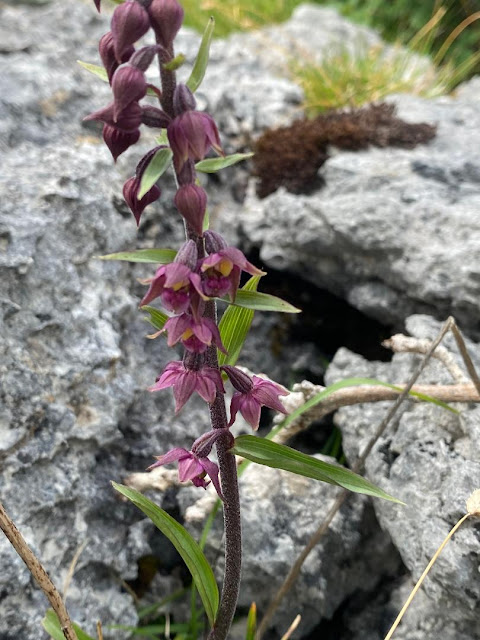 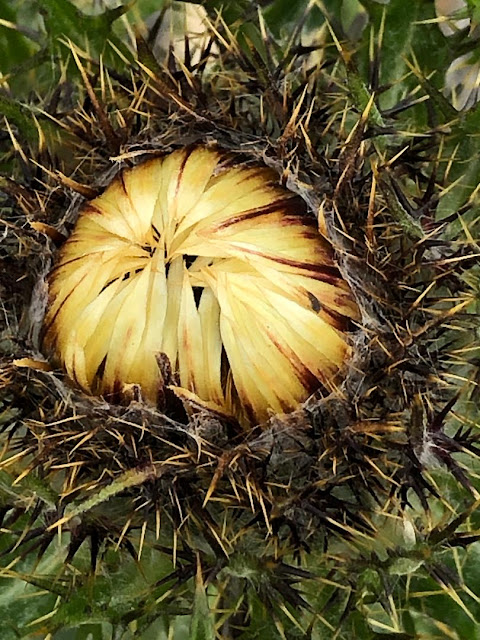 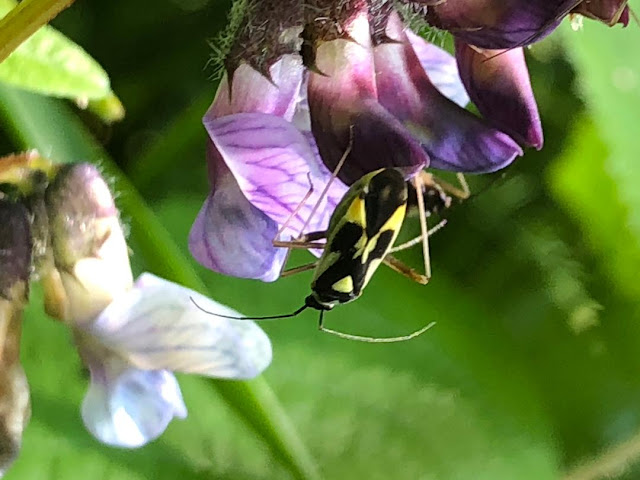 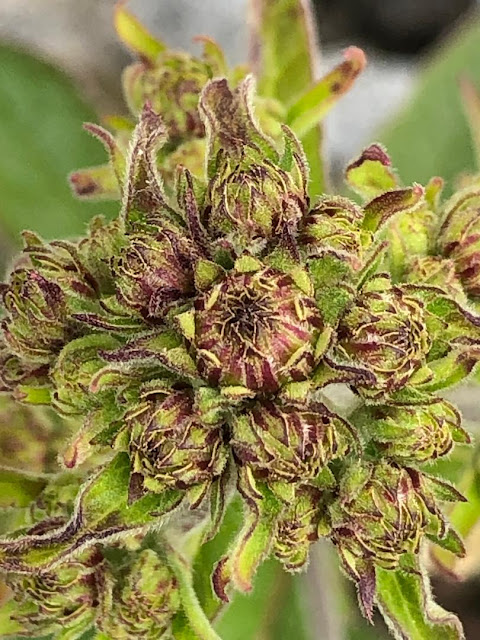 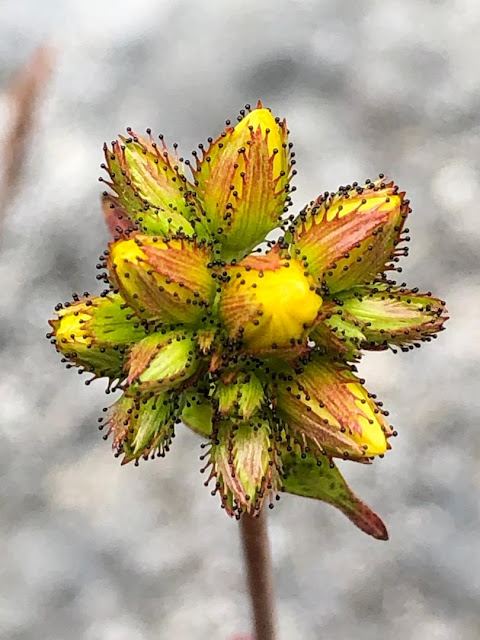 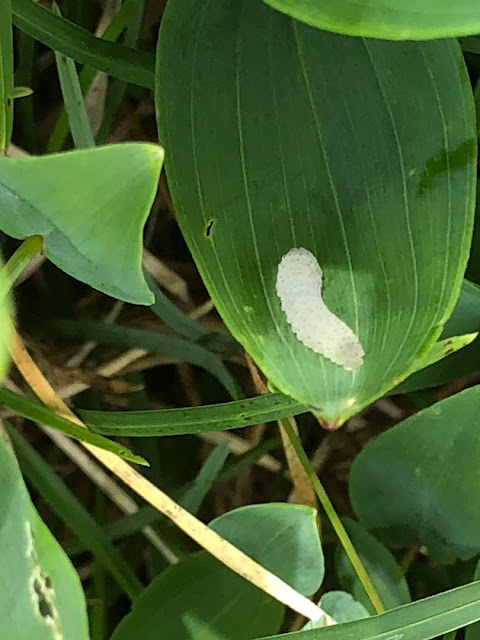 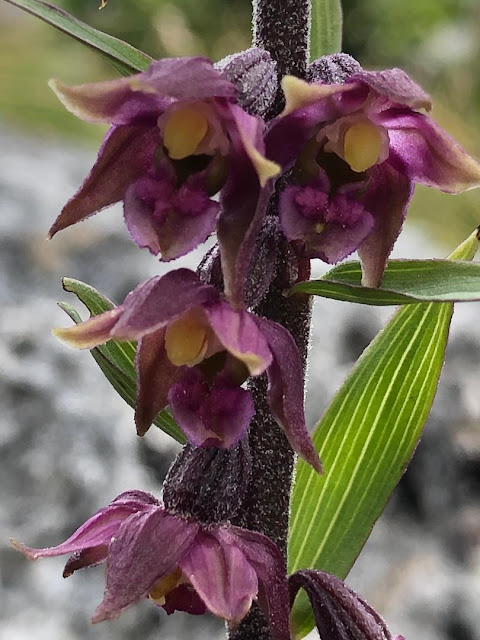 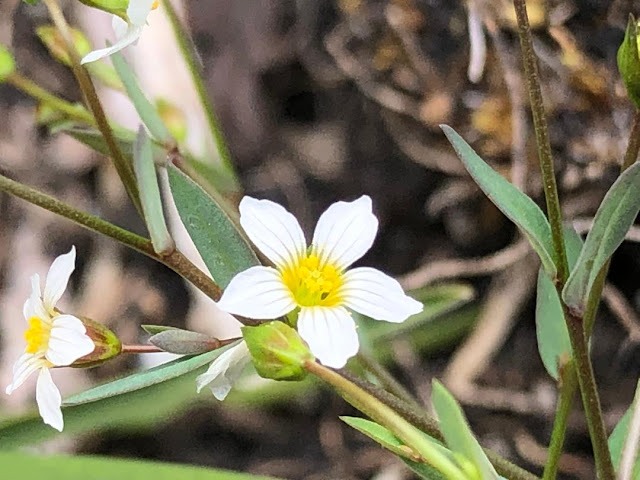 Fairy Flax seen today, but photo taken last week.
CHECK OUT MORE BLOGS BELOW
If you want the most up to date blogs about birding and vismig and other stuff please click over this link:
Early movement and Spring Bird Migration over Burton In Kendal.
Click over and Check out our Swifts (arrival 7th May 2021
Hutton Roof's Rinnentier (Rinnenkarren)
Arnside Naturalist party for Orchids 29th Jun 2021
Herb Paris    Birds Foot Sedge
Gymnosporangium clavariiforme (Cedar Apple Rust fungi)
Merlin chasing Skylark, yet Skylark evades capture by clever tactic
read more below these links:
Notes on Lapwings (3rd March 2021) Demise (local 1960s onward) and also Winter Roosting on Factory Roofs in East Lancs between 1980s and 2000 see below the links: