We have a further sighting of a Spotted Flycatcher we ringed at Oakenclough back on 7 September 2019.

Thanks to the person who found Spotted Flycatcher AKE3299 as a breeding bird in May and June 2021 we have an unexpected and extraordinary record. I will quote from the BTO notification to us. Bold text is mine.

Spotted Flycatchers from LeedsBirder on Vimeo.

I contacted Leeds Birder, Paul Wheatley and asked permission to use his super detailed video as above.  Paul clearly worked extremely hard, perhaps frame by frame of the footage to read the combination of letters and numbers on the ring so as to try and discover the origins of AKE3299.  A fine piece of detective work!

I was able to point Paul to the Another Bird Blog post of 7 September 2019 and advise that AKE3299 was one of two Spotted Flycatchers caught that day, both juvenile birds of the year. 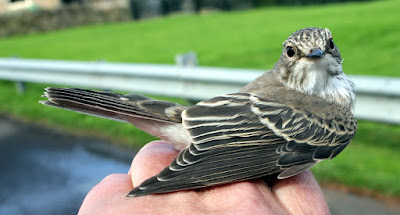 The two flycatchers of that day were caught hours apart but may have arrived together that morning of 7 September during the window of fine weather that followed a week and more of September winds.

Almost certainly AKE3299 was born in Yorkshire in the summer of 2019 and returned there to breed in the same area in 2020 and in 2021.  Its autumnal migrations in both years would take it across the Pennines on a south westerly path through England, France and Spain and then towards Africa where it would spend the winter. Spotted Flycatchers are late to return to the UK and it can be late May before they are seen back on territory. 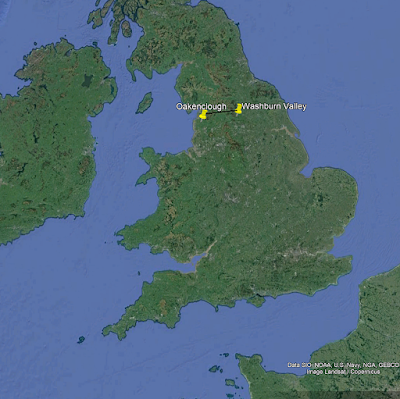 Spotted Flycatchers cross the Sahara Desert twice a year on their way to and from wintering areas in sub-Saharan Africa, where a loss of woodland may have reduced survival. Another explanation is that breeding success has fallen because of fewer insects, loss of habitat and because of increased predation by woodland predators such as grey squirrels.

Spotted Flycatchers have declined substantially in recent years and are designated as a Biodiversity Action Plan (BAP) species. They are popular birds as they frequently nest close to house walls or in hanging baskets. They fly from prominent perches to catch insects, and are an attractive sight in country villages.  Their numbers have declined by about 80% over the past three decades.

Thanks again to Leeds Birder for this brilliant record of a Spotted Flycatcher and for proving the value of reading ring numbers in the field. Paul and team have more videos on Vimeo that make for excellent viewing.

News next time of our catch of Sand Martins on Tuesday morning.