I had arranged to meet Steve Graham at Birk Bank yesterday, the plan was to check out the dragonflies and butterflies on and around the bog, and to arrange a butterfly field trip at a later date. I enjoyed the meet and conversation with Steve, during which we agreed, if the sun broke through the clouds, the dragonflies would get the power they need to be more active.

Steve had to leave and left me to it after about an hour, and sure enough the sun then broke through, and eventually produced 2 Keeled Skimmer males, they were seen as a species I've found at Birk Bank for the fifth consecutive year since the Keeled Skimmer was first found here by Steve Graham in August 2015. Also seen, 10 Large Red Damselfly, and 6 Four-spotted Chaser. Butterflies seen, at least 12 Small Pearl-bordered Fritillary, 4 Small Tortoiseshell, a Ringlet, and Large Skipper. 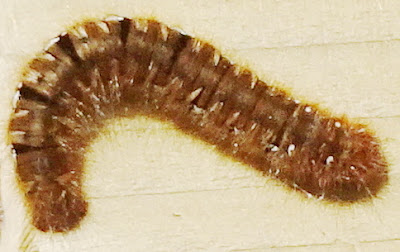 A Common Lizard was also on the boardwalk, as was this Oak Eggar caterpillar.

A walk as far as Ottergear Bridge was now about to turn into something special. A Garden Warbler, Blackcap, Chiffchaff, and 6 Willow Warbler, were the birds of note. 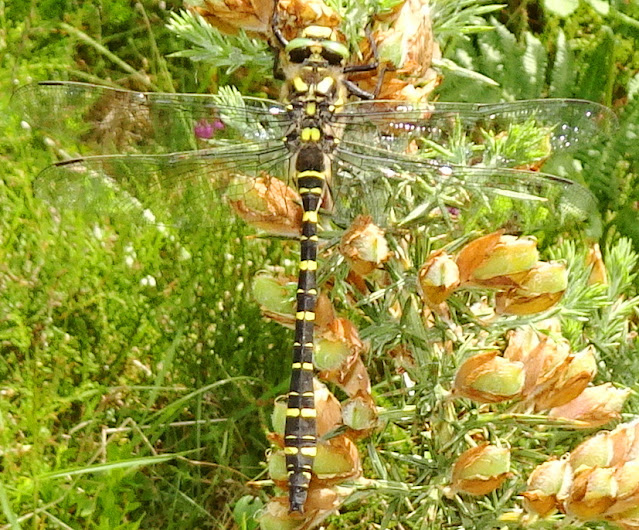 Golden-ringed Dragonfly 29 June. Pete Woodruff.
On the return walk, a few metres from the east side of Ottergear Bridge, a dragonfly ahead of me, obligingly settled to reveal itself as a smart Golden-ringed Dragonfly, a species seen on acidic streams, but often found on open moors and heaths.
But now, as I stepped off the west side of Ottergear Bridge, things were about to get better, another dragonfly was patrolling a boggy area and was soon joined by a second, they were another 2 Keeled Skimmer males, known to be found in runnels in boggy areas, but there was nothing going to quell the elation I had at finding four Keeled Skimmer in one day.
Birk Bank Rules....Again!