Friday’s ringing session at Oakenclough began with a cracker of a bird, an immaculate, recently fledged Redstart with a fiery orange tail.
It’s a species that we rarely catch at Oakenclough, perhaps one or two each year in habitat that lacks the mature birch and oak woodland that Redstarts favour. Such woodland is fairly near and also a couple of miles away on the edge of Bowland from either of which our annual Redstarts may originate. 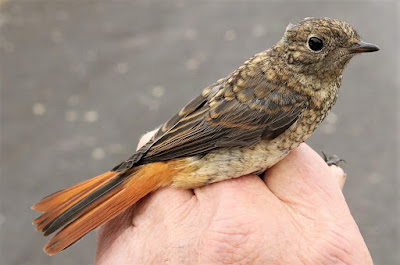 Redstart
A juvenile Redstart has the blotchy looks and overall demeanour of a juvenile Robin. Without the red tail, a Redstart could impersonate a Robin. The two species share many habits, actions and chat-like behaviour but the Redstart is slightly slimmer and not quite as heavy.
We started with the firecracker bird but the session fizzled out with the catching of other site rarities that leave us unmoved, a humdrum Blue Tit and an uninteresting Great Tit.
It seems we are not alone with a lack of Willow Warblers that other ringers report during June and now July. Just two Willow Warblers caught - one adult and one juvenile when normally we should be into double figures for a July ringing session. The single adult male was well into the stage of replacing all of its flight feathers in readiness for autumn and the journey back to deepest Africa. 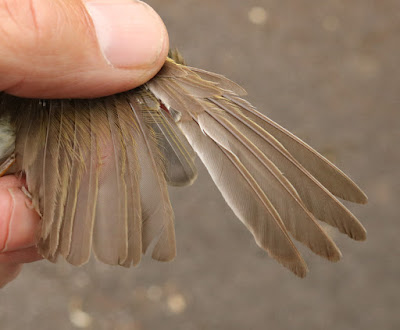 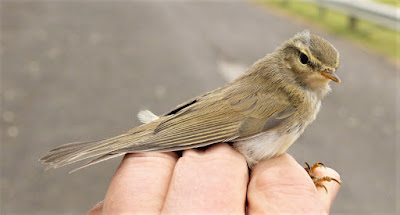 Willow Warbler - juvenile
During the morning we’d heard a few Siskins overhead with their unmistakable high-pitched “ping” flight call and hoped we might catch one or two. The Siskin is another species that breeds close by but not on site and we expect to catch them on their in spring and autumn migrations rather than summer. The flight call of a Siskin is of course unique and one that once learnt is not forgotten and can be picked out during autumn visible migration watches. Click on the sound track below to hear the call of a Siskin.
But catch we did, a second summer male,  the actual one shown below. 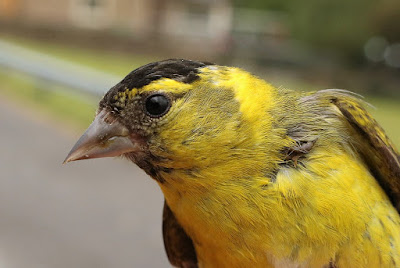 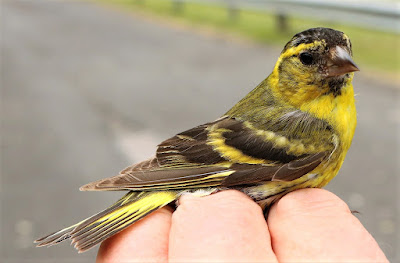 Siskin
A recently fledged Goldcrest was without a crest of gold or any other colour which rather confirmed the fact that Goldcrests breed in the conifers just across the stone wall that borders the ringing site. These youngsters begin to develop colour on their crown feathers at their partial moult within a couple of weeks of leaving the nest. 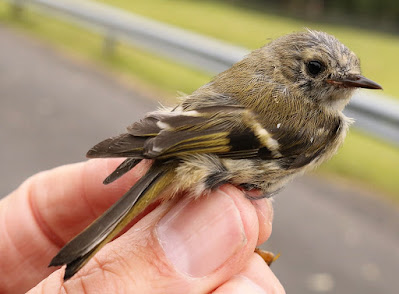 Goldcrest without crest
The Chiffchaff was also a post juvenile wanderer from not too far away. The species does not breed within our ringing plot. 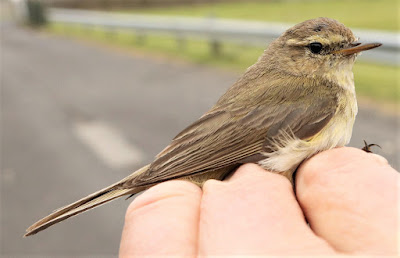