Here’s a story with conclusions that may not be all that surprising to many bird watchers. It’s about birds’ sense of smell, a subject tackled here on Another Bird Blog in December 2014.
https://anotherbirdblog.blogspot.com/2014/12/do-birds-smell.html
The story below is from Science Daily of July 2021 - “The fine nose of storks."
"The sharp eyes of an eagle, the extraordinary hearing of an owl - to successfully find food, the eyes and ears of birds have adapted optimally to their living conditions. Until now, the sense of smell has played a rather subordinate role. When meadows are freshly mowed, White Storks often appear there to search for snails and frogs. Researchers at the Max Planck Institute for Animal Behaviour in Radolfzell and the Max Planck Institute for Chemistry in Mainz have now studied the birds' behaviour and discovered that the storks are attracted by the smell of the mown grass. Only storks that were downwind and could thus perceive the smell reacted to the mowing. The scientists also sprayed a meadow with a spray of green leaf scents released during mowing. Storks appeared here as well. This shows that White Storks use their sense of smell to forage and suggests that the sense of smell may also play a greater role in other birds than previously thought." 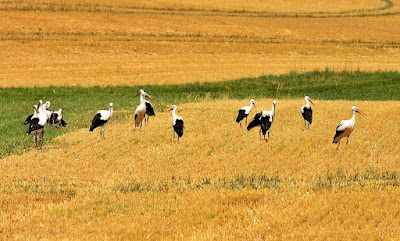 White Storks
"For farmers around Lake Constance, it's a familiar sight: when they start mowing their meadows, storks often appear next to the tractors as if out of nowhere. The White Storks live in the wet areas around the lake, feeding on snails, frogs and small rodents that find shelter in high meadows. If these meadows are mowed, the small animals are easy prey. However, the storks do not always appear when mowing takes place. Until now, it was not known how the storks locate the rich food source. " 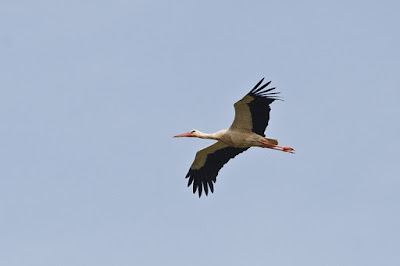 White Stork
"Previously, it was believed that birds relied primarily on their eyes and ears rather than their sense of smell. "It was simply assumed that birds can't smell well because they don't have real noses," says Martin Wikelski, director at the Max Planck Institute of Animal Behavior. "Yet they have a very large olfactory bulb in the brain with many receptor molecules for scents." So birds have the best prerequisites for a fine nose.
Wikelski has spent many years observing storks and researching their migratory behaviour, among other things. When he talked to his colleague Jonathan Williams about the storks' puzzling reaction to mowed meadows, Williams had an idea. Williams works at the Max Planck Institute for Chemistry in Mainz, Germany, studying volatile organic compounds and their effects on humans and the environment. "My guess was that the storks were reacting to the intense smell of freshly cut grass," Williams says. This typical smell is produced by so-called green leaf odorants and consists of only three different molecules. "These are also added to perfumes, for example, to give them a fresh, "green" note," explains Williams.
The researchers now wanted to find out whether the sense of smell actually leads the storks to freshly mown meadows. To do this, they monitored the birds' movements both from aircraft and via GPS sensors of tagged animals. "We first had to rule out the possibility that the storks could hear the tractor or see the mowing process," Wikelski says. Therefore, they only included storks in the observation that were more than 600 meters away from the mowed meadow and did not have direct visual contact. The researchers also made sure that the storks were not alerted to the mowing process by the behaviour of conspecifics or other birds.
When mowing began, only the storks that were downwind flew to the meadow in question. The conspecifics that were upwind and thus could not perceive the grass smell did not react. To test whether the smell of the cut grass alone attracted the storks, the researchers switched to a meadow that had been mowed two weeks earlier. "The grass of this meadow was still very short. Therefore, it is uninteresting for the storks to forage," Wikelski explained. On this meadow, he and colleagues spread grass that had been mowed a short time before at a greater distance. A short time later, the first storks flew in and searched for food in the mown grass.
The researchers finally mixed a solution of green leaf scents and sprayed it on a meadow with short grass. The meadow then smelled intensely of mown grass and also attracted storks from the surrounding area. "This proves that storks find their way to feeding sites via scents in the air," Williams says. This finding contradicts the previous assumption that storks primarily use their eyes to find food. Rather, the birds rely on their sense of smell to do so. "There have been storks that have flown more than 25 km from the other side of Lake Constance to mowed meadows," Wikelski says. The researchers suspect that the sense of smell may also play a greater role than previously thought in the foraging activities of other bird species."
Birds of prey such as Buzzards, kites and falcons spring to mind. These species are regularly observed flying over or within striking distance of meadows where their sense of smell probably plays a part in their hunting prowess. 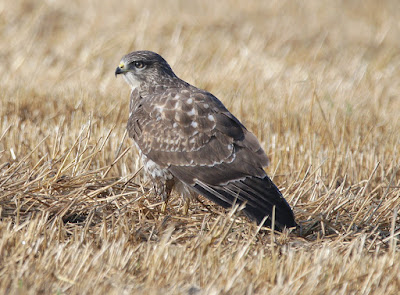 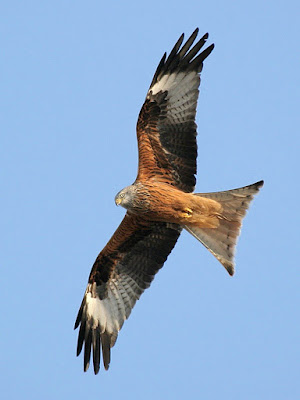 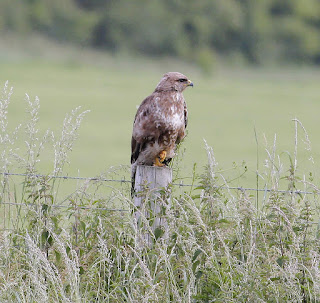 Buzzard
These scientists might be surprised to learn that experienced bird watchers already suspect that birds find their food by many methods, the sense of smell being just one of them. Birders have a nose for such things and are often ahead of the game. If only they were consulted a little more often by experts. 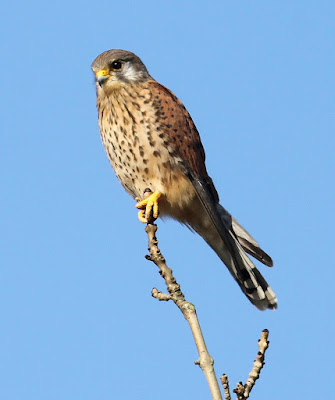 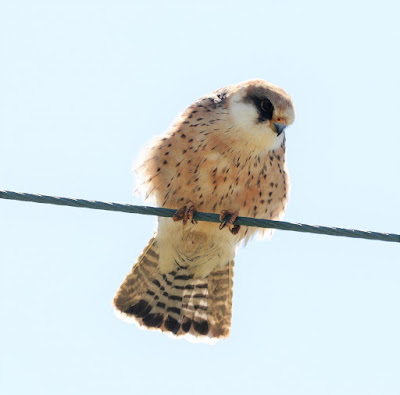