To be honest it was too hot to be lingering at a bog and wandering around Birk Bank looking for dragonflies, but it's what I like to do, and luvit.

I found 8 Keeled Skimmer, seen as three male and two female all at the bog, and three male as I approached Ottergear Bridge from the west. These three - 2-1 - were around boggy areas on the track, obviously seen as runnels, that are regarded to be part of their known habitat, but I still find it an odd place to find these dragonflies, here for three weeks now, and showing expansion of the species in our area.

There was interesting behavior at the bog, when a male Keeled Skimmer 'picked' a dragonfly off the bog, much as a bird of prey would take prey in its talons, I couldn't ID the victim to be a female KS, it being a darker individual. The dragonfly soon broke free, but the male approached it again and actually came to land broadside across the 'female' wing tip to wing tip. I picked up the female again, now it was ovipositing....All very bizarre!

Butterflies numbers as I see it continue to be sparse, though 15 species in a couple of hours at a managed local hotspot would appear to contradict this, but doesn't succeed in doing so in my experience in the wider countryside this year so far. 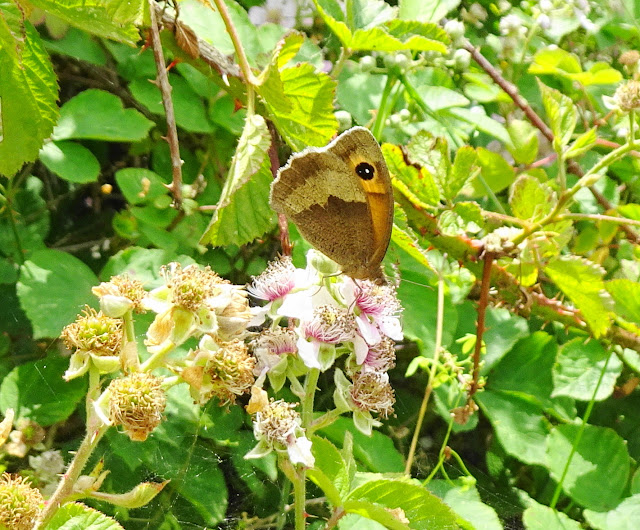 My records for this visit, 14 Large White, 6 Meadow Brown, a Small Heath and Large Skipper.

This GRD on the fence by the boardwalk at Birk Bank bog, was feeding on an insect. Watch closely for the small 'beetle blue wing case?' then something falling from the mouth....View Full Screen.