After the relative quiet of birding of June and July, the first days of August sees many birders pick up their bins again. There’s hope that the new month will bring post breeding dispersal with signs of true autumn migration and a wealth of birds that may arrive with unsettled weather and cooling temperatures.
Sunday morning at Cockerham was cool with a pronounced westerly breeze and ever changing bouts of sun and cloud. I had single panel nets in the four foot high seed plot where I hoped to catch the first Linnets of the autumn. Hidden in the lee of the car as protection from sun, the cool breeze and the threat of a shower I switched a couple of times from a shirt to adding a jacket and then back to jacketless as the sun returned.
All the while Linnets arrived from both west and east, individuals, small groups and even a flock of 25+ that eventually gave a count of 60 or more Linnets; a clear sign of the autumnal flocking behaviour of small finches.
A couple of Linnets escaped as I walked to the net however I did capture six, 3 moulting adults and 3 juveniles of the year. There was also an adult female Blackbird. 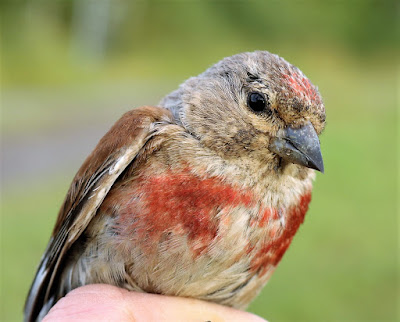 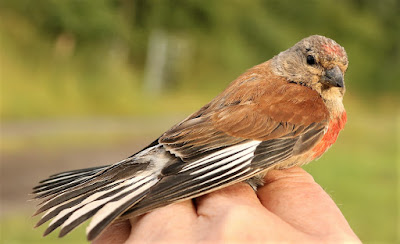 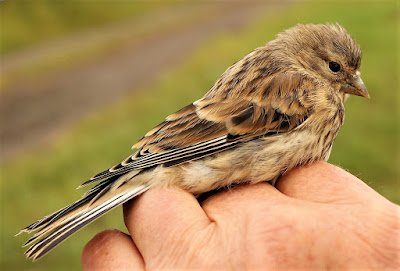 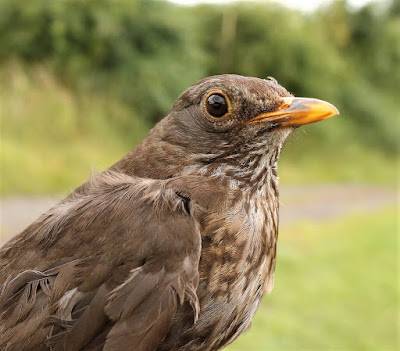 Blackbird - adult female
Perhaps and in view of the weather it was no coincidence that the morning produced a clear movement of Swifts heading south, singles and twos at first. And then rather suddenly about ten o’clock and directly above the nearby pool came a vortex of Swifts, 50 or more feeding below the billowing grey cloud. Within minutes they were gone, back on high and out of sight to continue their southerly flight. 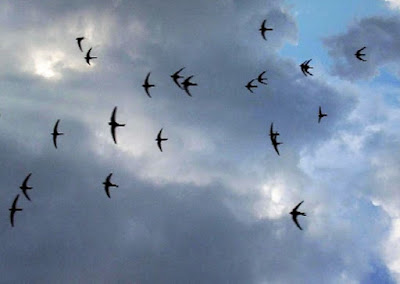 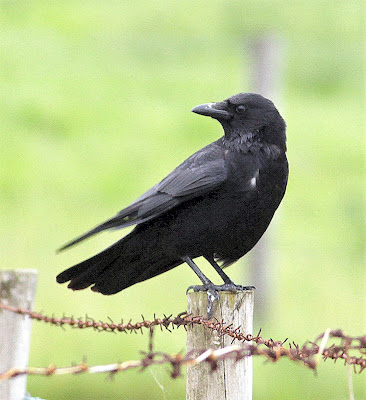 Carrion Crow
In other news. It was here in Cockerham that a Great Egret lingered through May and well into into June 2021 and where earlier in the spring there has been two or even three individuals.  At one point I hoped that the egrets might join the Little Egret by becoming a breeding species of this part of Lancashire. It was not to be but now comes news of Great Egrets from the South West of England. 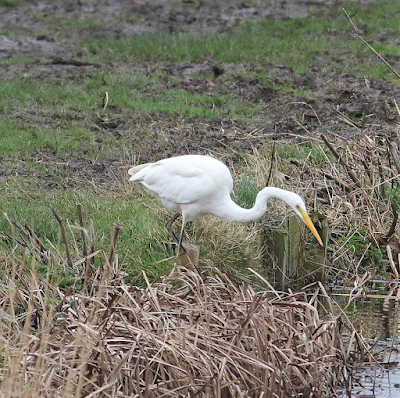 Great Egret - Fylde, Lancashire
From Bird Guides.“Great Egrets have enjoyed a record-breaking year on the Somerset Levels, as the species continues its rapid colonisation of Britain. An estimated 50 chicks fledged this year on the Avalon Marshes. Nesting took place at 10 separate locations across Shapwick Heath, Ham Wall and Westhay reserves, with 25 of the 37 nests found going on to successfully fledge young. "
"Great Egret joined the list of breeding British birds as recently as 2012, when a pair nested at Shapwick Heath Somerset – the epicentre of the current population in the country. For much of the 20th century the Great Egret was restricted to the wetlands of Eastern Europe but, since the 1990s, the species made a comeback, nesting in increasing numbers across Europe and then spreading west."
"Since 2012, numbers of breeding birds in Somerset increased steadily. In 2017, a pair of Great Egrets fledged three chicks at Holkham Nature Reserve Norfolk, marking the county's first successful breeding attempt.”
In 2019, a single pair nested in Cheshire for the first time, at Burton Mere Wetlands, a flap and a glide into to Lancashire for a Great Egret.
More news and views soon. Stay tuned to Another Bird Blog.