Wednesday morning at Cockerham began ok. Not perfect but a cool 10mph southerly wind. A couple of sheltered nets meant ringing might be possible. By Wednesday early evening the heavens opened to a downpour and my decision to go ringing had been absolved.
As usual the morning target was Linnets and anything else that might stray into the catching area. It’s a seed plot/game cover, although in this case the farmers are not shooters but people who have to make a living, but where possible farm with an eye on maintaining their land for animals, birds and wildlife in general.
Ten birds caught - 8 more Linnets to add to eight of last week, 1 Willow Warbler and a House Sparrow. Of those 16 Linnets, twelve have been juveniles and four adults, a healthy enough ratio proportion to suggest that 2021 has been a decent year. 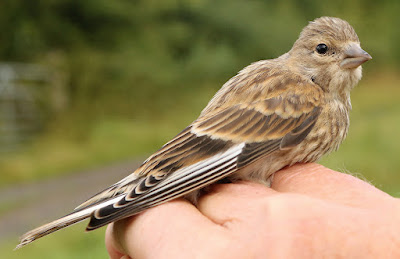 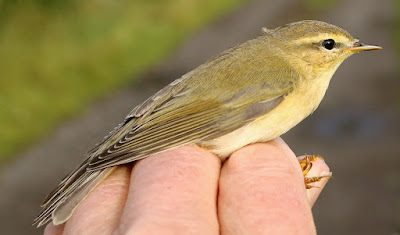 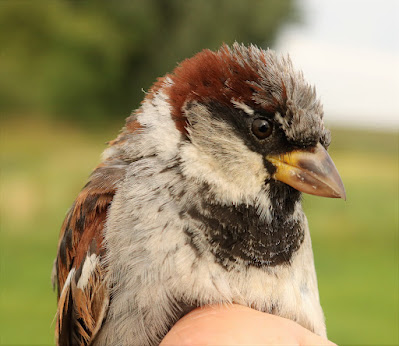 House Sparrow - adult male
The morning turned into something of a raptor fest with four species seen - Kestrel, Sparrowhawk, a Merlin and then two sightings of a Peregrine (or two individuals.)
I have intermittent sighting of Sparrowhawks here as they do not breed on site but probably do so nearby. The Sparrowhawk did the usual trick of hanging around in an area where small birds were likely to show. As soon as the hawk spotted me, it flew through the nearest clump of trees and carried out the customary disappearing act.
Kestrels have been pretty scarce this year perhaps as a result of the dearth of small mammals in the early year and during the frosts of May. Until this Wednesday I’d seen very few Kestrels, the one hovering close by my ringing station proved a welcome sight. 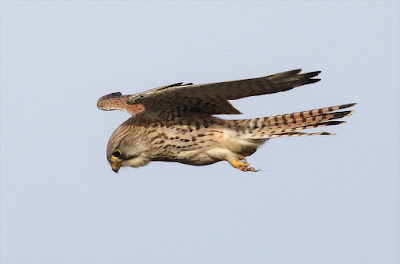 Kestrel
In the distance recent heavy rains have left a flash flood in good shape to welcome a huge concentration of hundreds of crows, gulls & Greylags, dozens of Woodpigeons and Stock Doves, and dozens of assorted waders, including Curlew and Black-tailed Godwit.
So many potential items of food pulled in a Peregrine from out on the salt marsh. The reaction of the massed birds could only be Peregrine, the fastest bird in the world. The panic was almost instant as wave after wave of birds took to the air in what appeared to be sheer terror. No other bird has quite the same effect as a hunting Peregrine. It’s as if the hunted share a common warning call for this major killer of birds large and small, a predator so efficient that the targeted one faces certain death.
The falcon was so fast through the flocks that I lost track of it more than once and didn’t see it take anything. An hour later it, or another, came back for a second go. In fact it’s not unusual to see Peregrines hunt in pairs or even threes, especially in early autumn when families may still be partly reliant on siblings and parents finding food. 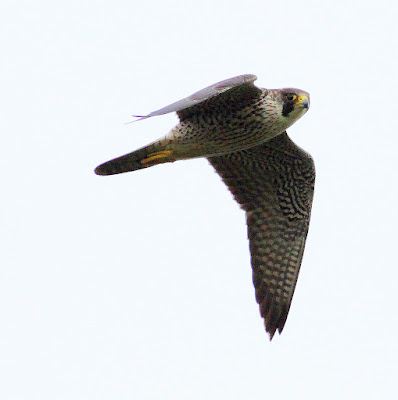 Peregrine
I imagine that Peregrines have done quite well during lockdown. Free from the normal and continuous disturbance by moorland tourists, fell walkers, landowners & their gamekeepers, our upland Peregrines probably made hay for 18 months and more.
Peregrines breed in rugged uplands and feed in the open countryside surrounding such sites. Whilst the breeding populations of Peregrines in many areas of England have shown a general pattern of increases in recent decades the same trend is not evident in northern uplands. Here marked losses in the range and population have been experienced and continue to this day. In particular, breeding productivity at sites on or near driven grouse moor estates is half of that found on non-grouse moor habitats.
There are now significant gaps across the northern uplands where Peregrines previously bred and where overall numbers are lower compared to the 1990s and 2000s, for example in the Peak District, Bowland Forest and the North Pennines.
The Merlin is also an upland breeder primarily restricted to heather moorland that too relies heavily on open country prey. Although Merlins are generally no longer directly persecuted, their breeding habitat, much of which is on moorland primarily managed for Red Grouse, is vulnerable to change of land use. The decline in farmland bird populations like Linnets is also likely to have an impact on survival of Merlins that winter around the Lancashire coast.
As I watched Linnets flit around the seed plot a Merlin appeared, flying low towards me, inches off the ground and alongside the 3ft high vegetation. At first, and as seemed the most likely, the brown head probably belonged to a Sparrowhawk. Then as the bird drew near the flight pattern was not the flap glide of a “sprawk” but the characteristic hurrying flight of fast wingbeats with mildly undulating progress. Some birders liken the Merlin’s flight to that of the similarly sized Mistle Thrush. 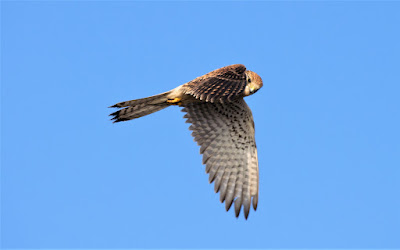 Merlin
Again, as soon as the little falcon spotted me, it lifted, veered off and flew out of sight over nearby trees.
There was a small but visible migration of Swifts and Swallows, 4 Swifts together and then a loose party of 20/25 Swallows hugging the ground so as to make fast progress on their way south. I watched them disappear over the fields and into the distance - visible migration.
Other birds seen during my three hour session – 35 Linnet, 2 Goldfinch, 5 House Sparrow, 8 Stock Dove, 45 Woodpigeon, 2 Grey Heron, 5 Little Egret, 7 Teal, 28 Curlew, 2 Little Grebe. 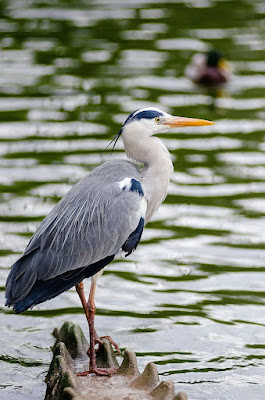 Grey Heron
The weather is looking unhelpful for a few days but as ever I will be looking for a window through which to explore. Stay tuned to Another Bird Blog.