I was unsure where to go this morning, as the tides are high at the moment, 9 metres plus, and high tide was at 3:32 a.m., so that meant looking for waders on the river was out, because at first light the tide would still be covering all the mud. It was breezy, but not blowing a hooley, and it didn't really feel like a morning for grounded migrants, or any vis. So, at 6:00 a.m. I found myself at the coastal farm fields at the school, under 7 oktas cloud cover, with a 15-mph westerly wind having a look on the sea. 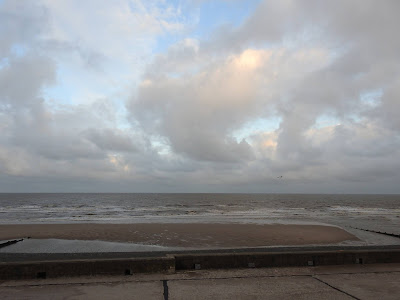 My view out to sea 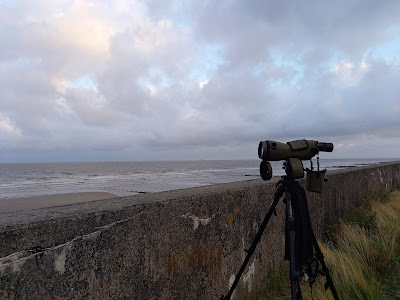 My scope didn't see much action this morning

As my blog title suggests, it was quiet, it was very quiet in fact, even quieter than very quiet, whatever that might be! As I said before, it wasn't blowing a hooley, but nevertheless I thought I might have a few birds on the move; a few Gannets perhaps, some Manx Shearwaters, even the odd Skua maybe? It wasn't to be, and all I had on or over the sea were, three Cormorants, a Common Scoter, twelve Sandwich Terns and five Eiders! And a walk round the farm fields and hedgerows produced diddly-squat! 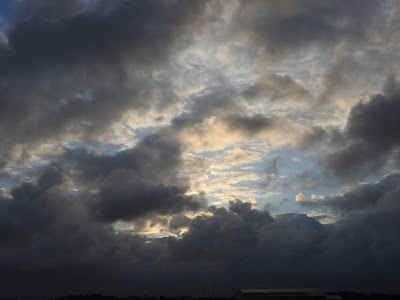 It must have been quiet if I am posting pictures of the clouds!
I was surprised that I managed to eke it out for nearly two hours!
On the 14th August 1989, I was volunteering at Long Point Bird Observatory in Ontario, Canada, and I was out at the field station at the very tip of Long Point. On this particular day, the wind was a light south-westerly, and we had clear skies with a maximum temperature of 20 degrees Celsius.
In no particular order, my notebook reminds me that on this day I encountered 8 Lesser Yellowlegs, a Short-billed Dowitcher, 6 Great Blue Herons, an Osprey, 2 Northern Harriers, 15 Killdeers, 82 Bonaparte's Gulls, 12 Ring-billed Gulls, 85 Common Terns, 3 Belted Kingfishers, 15 Least Flycatchers, 25 Eastern Kingbirds, 12 Purple Martins, 10 Tree Swallows, 2 American Crows, 85 Cedar Waxwings, 20 Yellow Warblers, 4 Northern Waterthrushes, a Canada Warbler, 100 Red-winged Blackbirds and 4 American Goldfinches.
I also managed to ring (band in Canada) a Barn Swallow, a Least Flycatcher, 2 Eastern Kingbirds, 7 Red-winged Blackbirds and 3 European Starlings.
Now, that was a proper August morning!