Someone stepped onto the viewing platform at Conder Green on Friday, and started a conversation by asking if there was anything interesting here. Obviously a visitor to the area, he went on to ask how long the pool had been in existence. I explained, the first mention in my records was in June 2003, when at the time of my first ever visit, I had thought perhaps it was a good idea to call it Conder Pool, a name that was adopted and has stuck for 18 years.

I made an all time record high count of 19 Greenshank on Friday, ten are seen here in the video....It's a pity the busy A5290 runs parallel with Conder Pool.

Some of the c.200 Redshank and Common Tern seen in this video, including a juvenile with a fish at which a Black-headed Gull makes an attempt to steal, but the tern flies off with its meal. Also in the clip, one of the 3 Black-tailed Godwit seen. I also counted 11 Little Grebe and 12 Tufted Duck, and a Kingfisher which gave good views perched at the back of the pool.

A circuit of Conder Green was rewarded by good views of a Reed Warbler in the reeds upstream of the road bridge, and up to 30 House Martin were around River Winds which usually has a decent colony of breeders annually. I made a count of 22 Small Tortoiseshell on the round.

On the Lune Estuary at Glasson, at least 400 Redshank and 650 Lapwing seen, with 72 Curlew, an adult winter Mediterranean Gull, and an adult Common Tern fishing and occasionally plunge diving. Interesting that I saw not a single Dunlin here today. A Brown Hawker was the only sighting along the canal at Glasson Dock.

A young Robin and Dunnock seen this week, also this morning, the Wren and Coal Tit put in an appearance. 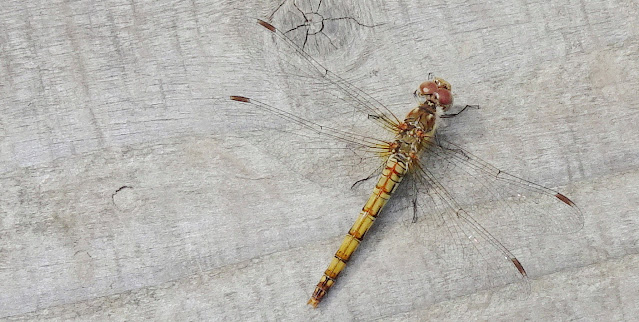 Female Common Darter Birk Bank 12 August
This photograph of a female Common Darter I found recently, initially puzzled me, I couldn't understand why the red on the abdomen. This is an old female, as they get older they turn olive brown. In a beautifully simple experiment a Japanese research team injected Vitamin C and oxidase enzyme into the cuticle of immature male darters and mature females and they all turned from yellow to red directly.
There's a link to an abstract on how Redox alters yellow dragonflies into red, but if you have no interest in the science, you might want to give this a miss ....https://pubmed.ncbi.nlm.nih.gov/22778425/
Thanks to Martin for the header pair of Azure Damselfly.