I was back at the Nature Park this morning for another ringing session in the reedbed/scrub, and I was a little more hopeful, because at first light I had full cloud cover, although the wind could have been a better direction than north-easterly. In the end, I did only marginally better than yesterday, and ringed just nine birds, although I had one less net up this morning.
The nine birds were:
Greenfinch - 3
Blackcap - 3
Sedge Warbler - 1
Willow Warbler - 1
Chiffchaff - 1 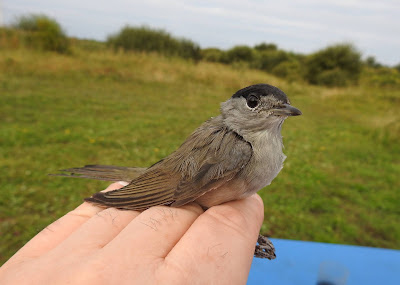 Blackcap
I ringed four species yesterday, and five species today, and only one species, which was Greenfinch, was common to both days. Indicative of the turnover of birds at this time of year.
I was putting the nets up as the Starlings exited their reedbed roost, so I am guessing that there were similar numbers to yesterday, somewhere in the region of 5,000 birds.
I had a good number of Goldfinches moving around to forage in different areas of the site, and in total my count was 126. There was no vis at all this morning, and just like yesterday I had few birding highlights.
A number of Brown Hawkers were on the wing, as were several male and female Common Blue butterflies. The forecast is looking okay again for tomorrow in terms of the wind strength, but it will still be north-easterly with clear skies. I'll probably still have another ringing session though, just in case.... 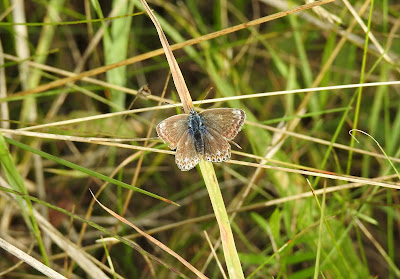 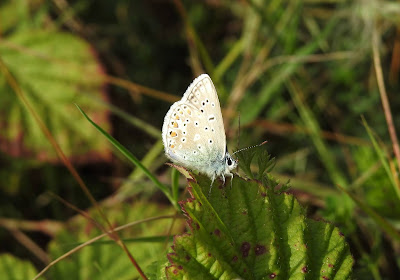 Male Common Blue (above & below). None of the males were playing ball,
and were refusing to show their gorgeous blue upper-wings. Having said that,
the underwing is nearly as stunning, and I like the querky angle of the male
below 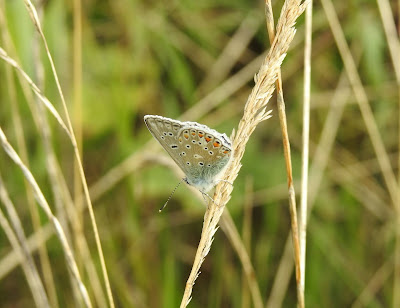