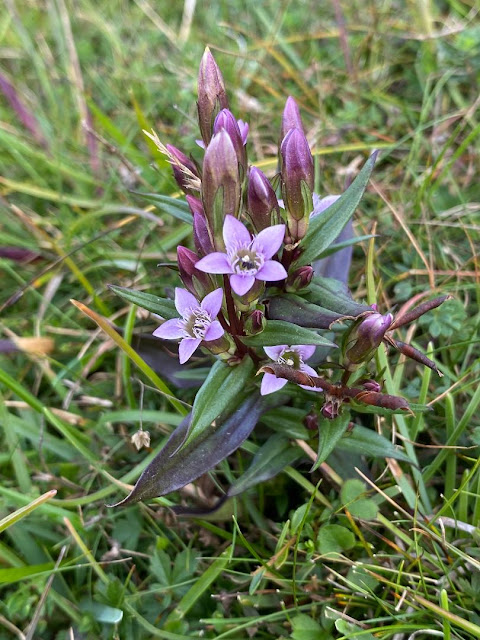 We do get Autumn Gentians throughout Hutton Roof, although the bulk of them seem to be on the more North West side known as Holme Stinted Pastures, Holme Park Fell, and areas on the Farleton side of Hutton Roof. I have found them in small quantities on Uberash Roughs, Uberash Breast and also to the East of the Trig Point.

I have found that they are really numerous about every three years when their numbers I have recorded in the 3,000 plus plants, but on the quieter in between years I have managed to only find between 50 to 75. So it really is nice when we do have a "special"  Autumn Gentian year, the last being 2020 and prior to that was 2017.

We have probably got several varieties of Amarella if the truth be known, or that I could make up with differing features. But the ones which seem to be established are the regular purple/magenta plant, then we do also have a "white petal (corolla) with purple to the back of the petal (corolla)" version which is said to belong to the sub species or Northern race called "Septentrionalis".  Now if we said that all white flowered ones were of this sub-species then we definately have far more of these than we do with the purple flowered (probably about 75% to 25% ratio).  But I have noticed that we do occasionally get a very light green/white amarella which are also and probably more true of a "white flowered specimen" BUT are not purple on the back of the petals/sepals (corolla/calyx) like the earlier ones I mentioned. See below for comparisons. 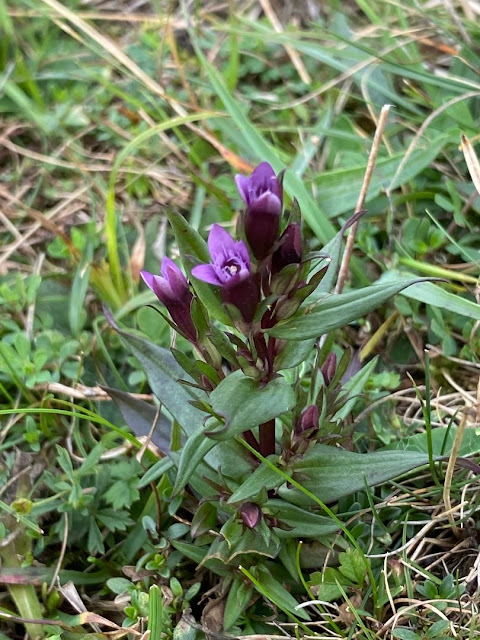 Above shows the regular Purple version of Amarella which will account for 25% of the Autumn Gentians on Hutton Roof.
Below shows the commoner version of Amarella which is white but with purple to the back of the petal (Corolla). This is the one which we probably have around 75% of the Autumn Gentians. Are we correct when we say that these are of the sub-species better known as the "Northern Version" officially called "Septentrionalis"? 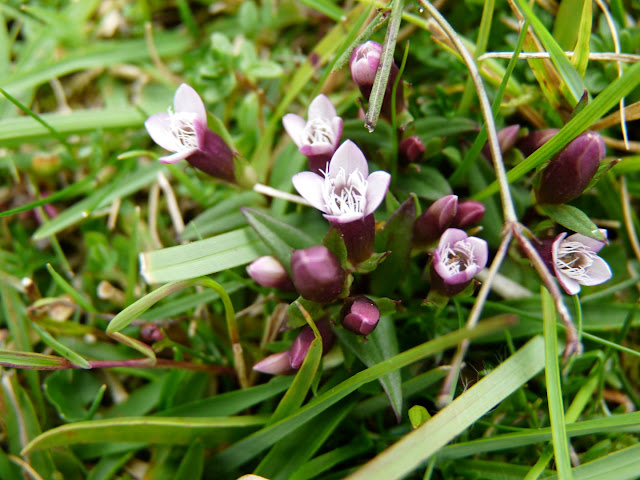 Now below I show yet another "white" flowered amarella version which is more of a true white within the flower (Corolla) and green/white sepals (calyx).
Below shows the full plant which is a very light version, although you do still get some darker tones to the stems. And beneath you do see the close up of the "white" flower. These more true white specimens turn up at the rate of maybe 1 per 100 of the regulars. So they are rare but not that rare. 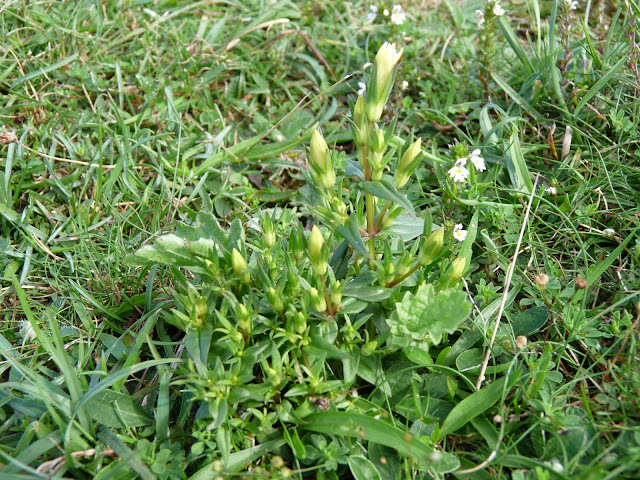 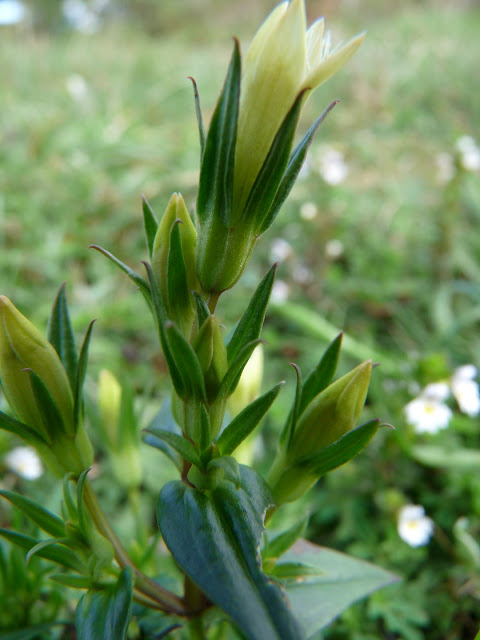 Amarella - Are these still classed as the sub-species "Septentrionalis"? or are they a totally different variety? 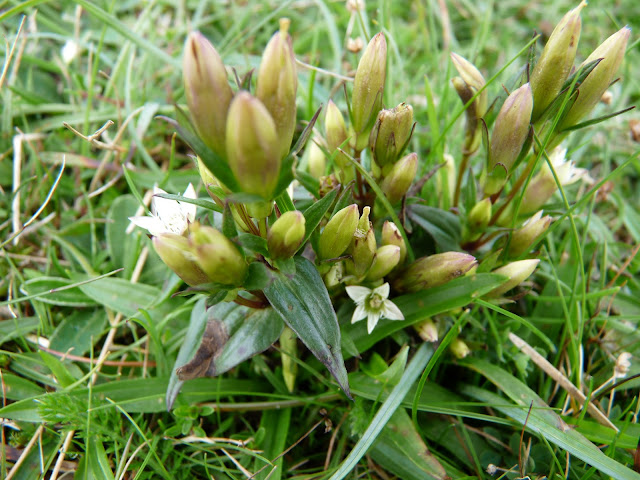 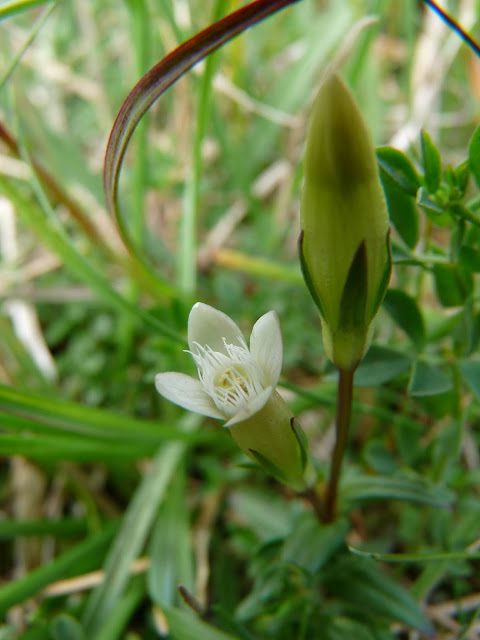 Besides the ones I have already mentioned, I have also found others which are slightly different, not so much in the morphology, but certainly in the colourations of the corolla/calyx.  Here are a couple of fine examples. 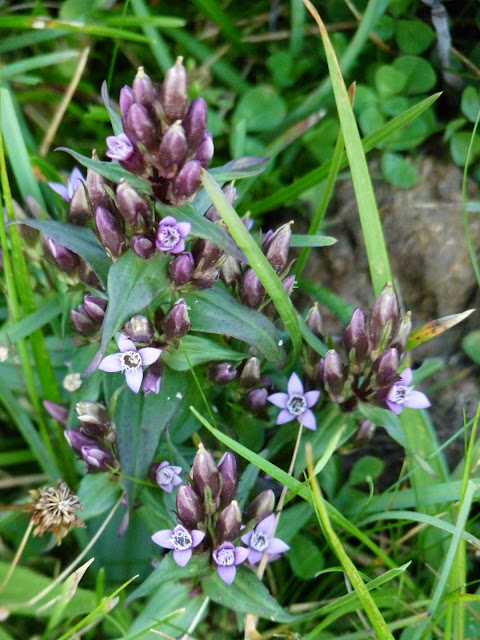 The above is a beauty which I found on Holme Park Fell about 2015 it is a good mixture from Purple all the way down through the blue to white. It is the only specimen I have found with these mixed variations.
Below: This is a beauty I found in 2020 on Holme Park Fell which shows a bicolor look with half the petal (corolla) in purple, yet the other half is white. There is a small population all close to one another which are similar. 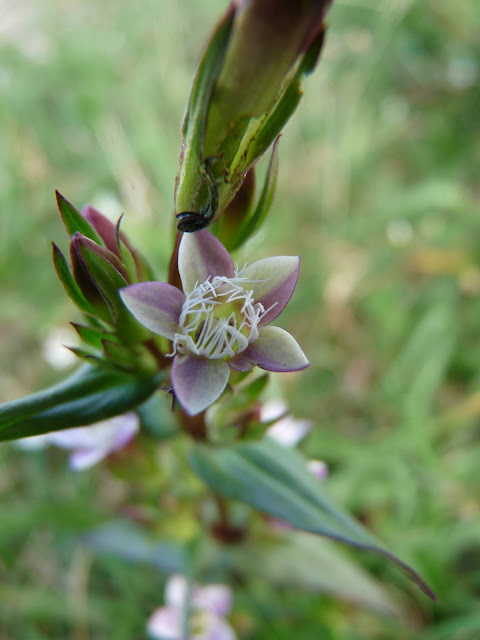 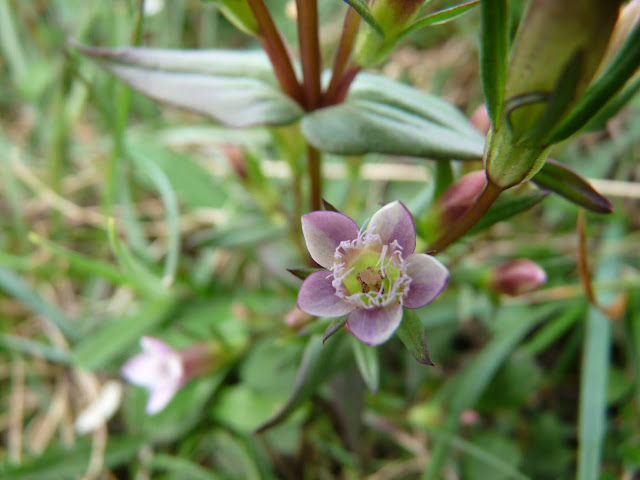 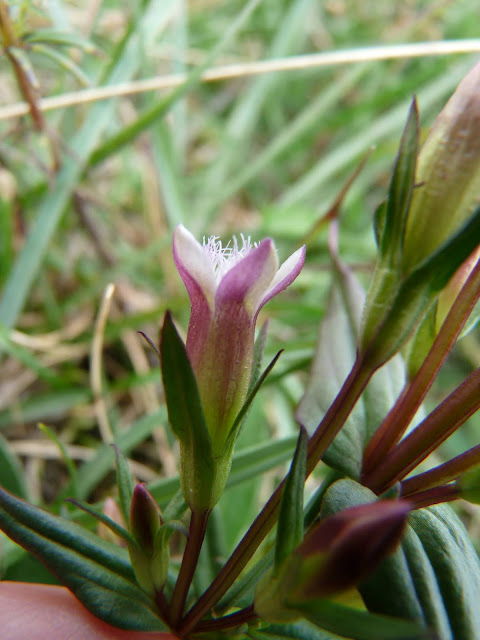 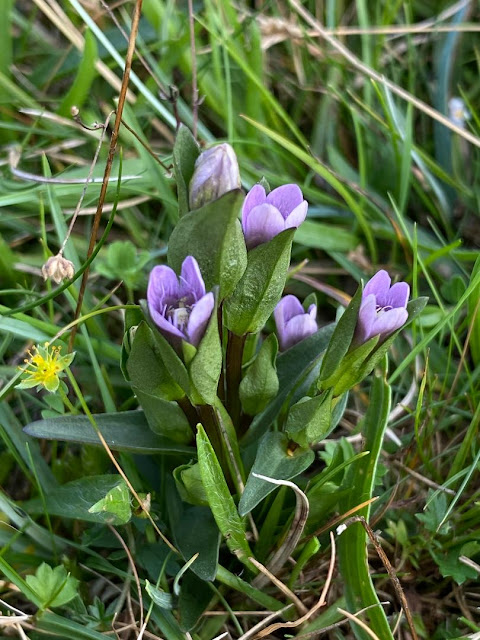 Photo: Field Gentian - 24th August 2021 - Holme Stinted Pastures
This is a very rare Gentian in Cumbria these days and we are so lucky to have over 300 of these plants all growing on Holme Stinted Pastures to the North West of Hutton Roof. I have as yet not been able to find anymore, anywhere else on Hutton Roof.
There are four sites were they are located with has many as up to 75 plants at one site and the others ranging between 30 to 50 plants. Three of the sites have one thing in common, which is typical of "Gentians", they are very close to tracks and footpaths or areas which have been well trodden in the past, short green grass.
All four sites also have odd specimens of amarella (Autumn Gentian) growing on them, and I can show examples by photos of the species being as close as 10" away from one another (see below). 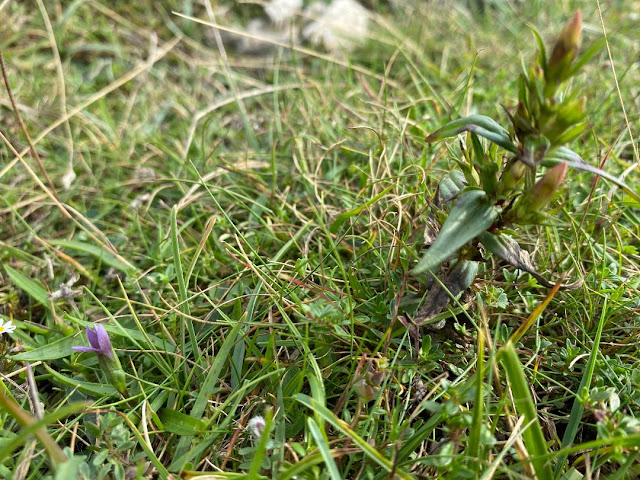 Above: Example of both campestris and amarella within 10" of one another.
Below are a few photos examples of the plants on Holme Stinted Pastures. 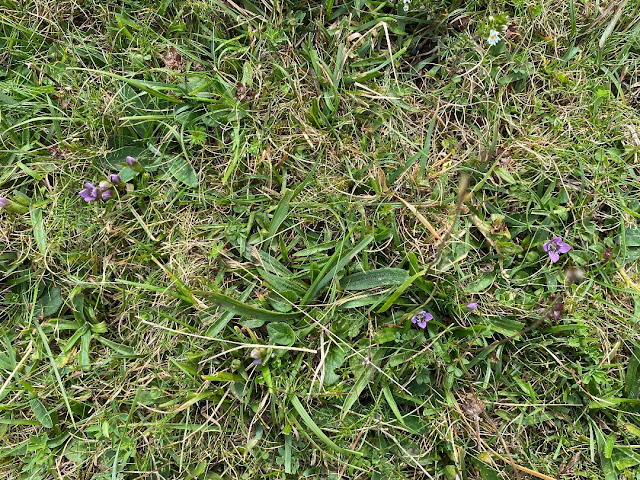 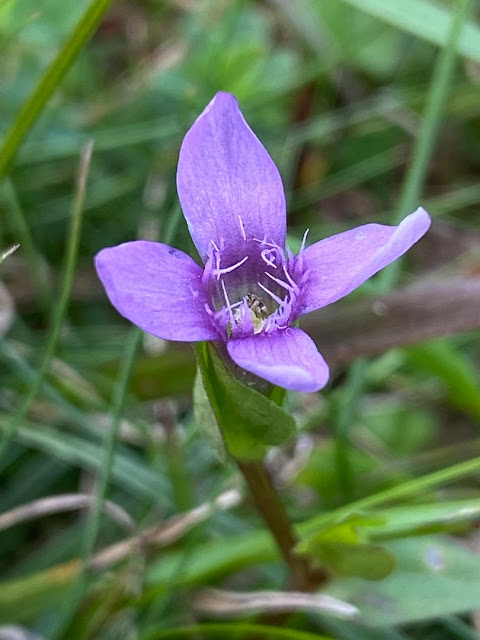 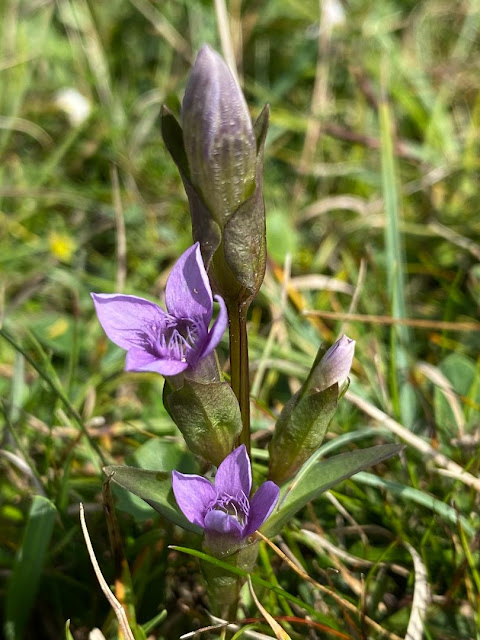 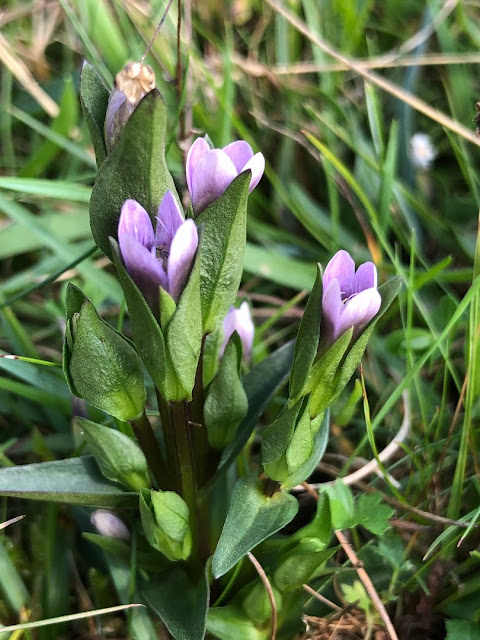 CHECK OUT MORE BLOGS BELOW
If you want the most up to date blogs about birding and vismig and other stuff please click over this link:
Early movement and Spring Bird Migration over Burton In Kendal.
Click over and Check out our Swifts (arrival 7th May 2021
Hutton Roof's Rinnentier (Rinnenkarren)
Arnside Naturalist party for Orchids 29th Jun 2021
Herb Paris    Birds Foot Sedge
Gymnosporangium clavariiforme (Cedar Apple Rust fungi)
Black Bryony (Tamus communis)
The Gentians - both amarella and campestris
Merlin chasing Skylark, yet Skylark evades capture by clever tactic
read more below these links:
Notes on Lapwings (3rd March 2021) Demise (local 1960s onward) and also Winter Roosting on Factory Roofs in East Lancs between 1980s and 2000 see below the links: