This morning Alice, John and I were back at the Nature Park, in the reedbed and scrub, for another ringing session. We had clear skies, and it was flat calm at first, but after a couple of hours there was a very light easterly breeze. The clear skies were probably an issue, but it seemed that we were heading in the right direction.
As usual, we were putting the nets up when the Starlings exited the roost, and I am repeating myself here, saying that there were about 5-6,000 birds roosting. Always a spectacle, and I have on occasions been next to the birds in the reedbed when they leave the roost, and the noise from those thousands of wings, is like waves gently crashing on the shore.
There is now just a puddle on the scrape, and when I say a puddle, it really is a puddle, probably just a few metres square. Nevertheless, two Greenshanks were interested, and flew around calling, looking as though they would land, but then headed off. A Little Egret was more than interested and landed at the puddle, but realised foraging opportunities on such a small area of water were limited to say the least, and it too lost interest and headed off.
An early Peregrine heading southwest, and a pair of Sparrowhawks utilising the wider area flew the raptor flag, and once again there was no vis! Under the clear conditions, any vis would have been beyond the range of our sight and hearing.
The ringing was an improvement on recent days, and like I said earlier, hopefully moving in the right direction, and we ringed 14 birds as follows (recaptures in brackets):
Reed Warbler - 4
Robin - 3
Blackcap - 3
Cetti's Warbler - 1
Greenfinch - 1
Willow Warbler - 1
Long-tailed Tit - 1 (3) 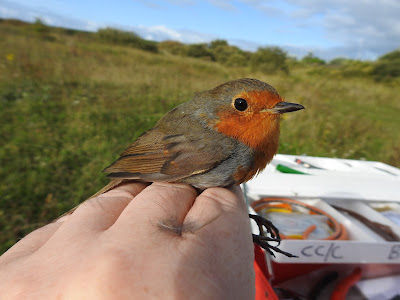 Robin
We're back tomorrow, so I hope we have another pleasant morning.