It was a good start yesterday, when Alice, John and I arrived at the Nature Park under clear skies and a light easterly wind, as we had seven Little Egrets roosting in a dead tree between the two pools. As I unlocked the last gate, I could see several 'white blobs' perched up in the said dead tree, and of course I knew straight away what they were. A roost of Little Egrets at this site is a first as far as I am aware, and long may it continue. 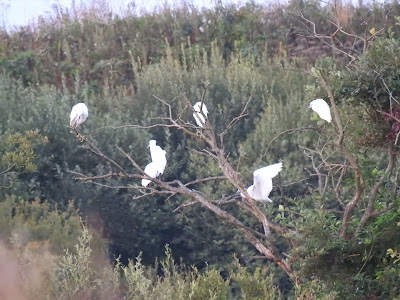 Six out of seven of the Little Egrets. Apologies for the quality, but they were
some distance away.
We put three nets up with associated MP3 players, and on the first net I was playing Tree Pipit song, in the hope that we might be able to ring a few of these red-listed species. On our way back to the ringing station we checked the first net, and I could see a Pipit species directly above the MP3 player, and knew what it would be. However, as I approached the Tree Pipit to extract it from the net, it flipped out of the pocket, and flew off. That was the first species that got away.
At about 8:15 a.m. we encountered the second species that would get away from us, but this species got away from us more figuratively speaking. I heard the unmistakable sound of a Common Crane, or Cranes, calling somewhere to the east of us. It/they called several times, and it sounded as though the calls were drifting south. All three of us were under no doubt as to what we heard, but it's just a shame that we couldn't see it/them. Where we have the ringing station in the reedbed/scrub, is very low down, and although we are only 300 metres from the estuary and saltmarsh, we can't see on to them. In fact, I often hear birds that are on the estuary, from the ringing station, without seeing them. So, that was the second species that got away from us yesterday morning.
After this bit of excitement, the morning was quiet. We ringed just 5 birds as follows (recaptures in brackets):
Robin - 1
Goldfinch - 3
Cetti's Warbler - 1 (1)
Reed Warbler - (1)
I always do complete counts for BirdTrack at all of my patches, but I won't trouble with you all the mediocre details. The only highlight, excepting the above, was the 6,000 or so Starlings that entertained us as usual, as they exited the roost.
Later in the morning Gail and I had a walk along Jubilee Quay, adjacent to the estuary, and had a few common butterflies on the wing. We counted at least 12 Small Whites, 4 Common Blues, a Green-veined White and a Red Admiral. The muddy creeks just held a single Little Egret and twelve Oystercatchers. 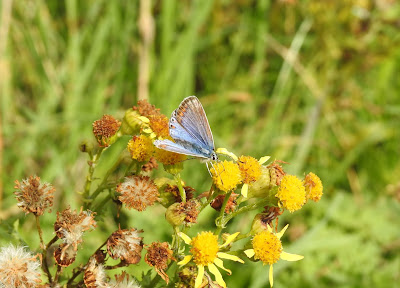 Common Blue
It looks like being a tad breezy for ringing tomorrow, so as there is a morning tide, I will probably have a look on the sea from the coastal farm fields instead.