The plan was to do some seawatching yesterday, as it was forecast to be too windy for ringing, and to ring at the Nature Park today and tomorrow. What I hadn't factored in was a flare up of my rotator cuff injury in my shoulder, that prevented me from doing any birding yesterday, and I most certainly couldn't have done any ringing. My rotator cuff issues put me out of action all day yesterday, but with plenty of pain killers and exercise, I was able to get out birding this morning.
I headed to my seawatching spot at the coastal farm fields, and I walked along the embankment under full cloud cover with a stiff north-easterly breeze. In terms of clothing, I am now starting to moult into winter plumage, and over recent mornings I have started off wearing the lighter of my two woolly hats, before reverting back to my baseball cap later in the morning when it warms up!
Swallows were the main species on vis this morning, and as is often the case when it is a northerly wind, they were moving north into the wind, rather than the expected south. I had 55 Swallows head north, and a couple of Meadow Pipits, an Alba Wag and a Grey Wag head south.
Sandwich Terns dominated the limited movement at sea, and most of the passage was southerly. There were some birds moving north as well, but they were probably just in a big feeding loop from Liverpool Bay into Morecambe Bay and out again. A lot of the early birds would be birds moving south from roosts in the Wyre estuary, and out into foraging areas. Anyway, whatever they were doing I had 236, with a supporting cast of 161 Common Scoters, 23 Gannets, 31 Cormorants, two Teal, two Auk sp. and my first Red-throated Diver of the autumn.
The tide was in when I got there this morning and 17 Turnstones were roosting on one of the stone breakwaters. The only other waders I had were three Dunlins and a single Oystercatcher.
The only grounded migrants I had were two Wheatears on the sea wall, and other bits and pieces that made it into my notebook included a Kestrel, 27 Goldfinches, a Reed Bunting and four singing Roesel's bush-crickets.
Depending on how my pesky rotator cuff is in the morning, I could be birding if it is paining me, and ringing if it isn't! I'll keep you posted. 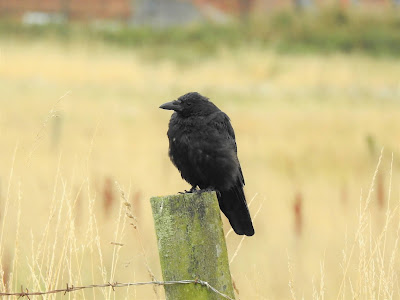 One of several Carrion Crows that I encountered this morning, and also the
only photo that I took!