My pesky rotator cuff woes plagued me for a few more days this week, and it wasn't until this morning that I was fit enough again to go out ringing. I had arranged to meet Alice at the Nature Park at 6:00 a.m., and I was looking forward to a good ringing session, and a morning's migration monitoring. However, at 5:15 a.m. I sent a text to Alice saying "it's fairly breezy here on the coast, and the forecast is backing that up. I'm still happy to give it a go, but I suspect we might well call it off when we get on site. However, you've got further to travel, so I thought I would see what you think first". Thankfully, Alice replied with "I'm just about to leave, I'll head over your way, and we'll see how it is if that's okay"?
We arrived on site to be greeted with full cloud cover, and a 10 mph east-southeasterly wind. And it wasn't too bad, it was certainly doable, and we quickly put up three nets.
The Starlings came out of their roost, but numbers seemed to have dropped, and there was perhaps just 4,000. We started off with Tree Pipit on one of the MP3 players, and a couple of birds dropped in, flew round a couple of times, lost interest, and continued on their southerly journey. A Grey Wagtail over, was the only other vis that we would record in the two and a half hours that we were there, and I think you can see where this is heading. 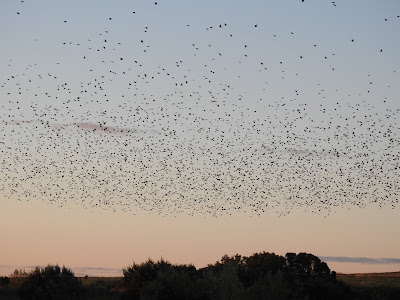 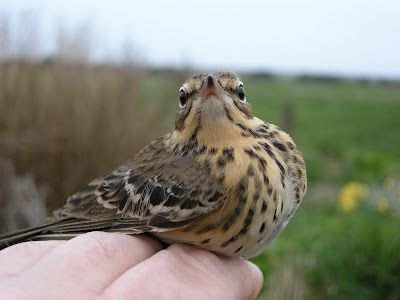 This is what a Tree Pipit looks like in the hand. This is a spring bird that I
ringed earlier, in fact 10 years earlier!

We ringed just three birds; two Reed Warblers and a Great Tit, and the Reed Warblers were the only species that we could remotely class as grounded migrants. The only other things of slight note on the pages of my notebook, were a singing Cetti's Warbler and a Kestrel!
I spoke to Ian during the morning, and he had walked the length and breadth of the peninsula and recorded no grounded migrants, with the only vis being a handful of Swallows moving east into the wind.
So, it was never meant to be this morning, and that's perhaps a little bit reassuring that it wasn't us getting it wrong, and I would certainly give us ten out of ten for effort! That's migration for you. Of course, the dilemma now is what to do tomorrow, and I'm still not sure.
There was a bit of doom and gloom reading in British Wildlife recently, regarding the Atlantic Meridional Overturning Circulation (AMOC), which is part of the Gulf Stream. The AMOC is at its weakest for over 1,000 years, and it has already weakened by 15% since 1950, and new projections suggest that by 2100 this might reach 45%. This would be a potential tipping point that could destabilise this ocean current, leading to huge climatic shifts to the UK, including extreme summer heat and very cold winters, owing to the lessened influence of the warm waters of the Gulf Stream. In fact, some scientists are saying that the climate emergency is already hitting 'worst case scenario' levels with extremes of weather and flooding. Very sobering indeed. On that happy note...........