It was a new experience for me to see at least 20 Grey Wagtail on Wednesday last week, obviously some autumn movement on the River Lune at Halton...Gripping stuff!

This is a particularly beautifully section of the river, and on Friday I made the effort to get back there, but I found a reduction in numbers today, with 10 Grey Wagtail being half of the twenty seen on Wednesday.

Of 3 Kingfisher seen, two sightings were the same male seen each time in this video, obligingly it returned to the boulders on the opposite side and gave good views, including on one occasion ejecting a pellet before flying off, then giving a small fish a bash against the rocks before swallowing it head first.

I enjoyed myself with the camera today, and the Goosander entertained me snorkeling and diving for small fry, and later preening.
The Grey Stalker.

Three Dipper seen Wednesday failed to show this time, but it was another pleasant couple of hours, spent in equally pleasant surroundings and an itchy video finger! 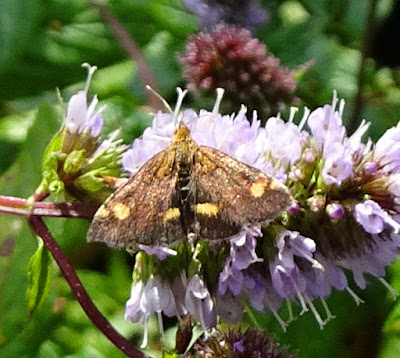 Pyrausta purpuralis. Pete Woodruff.
I'm sticking with Pyrausta purpuralis on this moth, although it can be confused with P.aurata, it was in the garden yesterday, the species has now visited us four times over the past year or two.
The header image of the Kingfisher is a frame saved from a video, it came close to being rejected by the quality control department, but despite its 'fuzziness' it just scraped through.