Driving down the road to the Nature Park I was surprised to see that it had rained quite heavily overnight, well, based on the puddles on the road it looked like it had. It wasn't forecast to rain, bit it made me think that perhaps the rain might have dropped a few migrants in. I was soon disabused of that idea!
The day dawned with four oktas cloud cover, with a light northerly wind. The photo below of the sky around sunrise gives you an idea of the conditions. Just as the Starlings were exiting their roost, only 1,500 now, I was putting the nets up. Play was pressed on the MP3 players, and I retired to my car for a coffee and some breakfast. 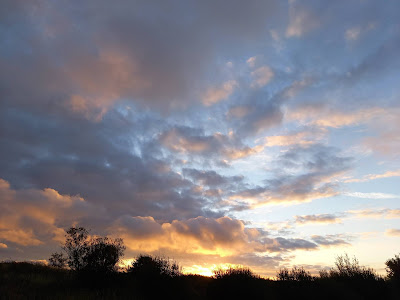 Sunrise this morning
It wasn't the most exciting of ringing sessions, and it soon became obvious that there was very little about. I ringed just three birds as follows:
Grey Wagtail - 2
Robin - 1 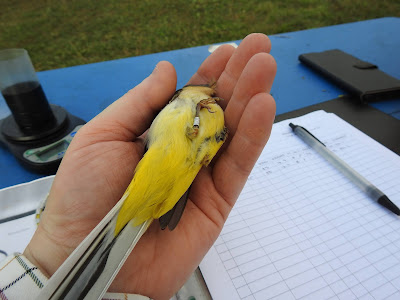 Look at those lovely yellow underparts on this Grey Wagtail 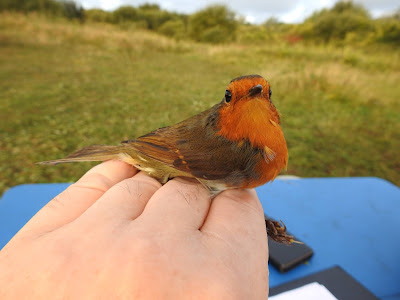 So, no grounded migrants, but was there any vis? No, not really! A couple of Grey Wagtails headed south, and that was it.
Shortly before packing up, I could see eight ducks wheeling round over the far pool, and they looked like Wigeon, but they were a long way off. On my way off site, I stopped to have a look on the main pool and they were indeed Wigeon. In addition to the Wigeon, the pool held a couple of Mallards, 40 Coots, seven Shovelers, three Little Grebes, three Teal, eight Tufted Ducks, four Moorhens and two Mute Swans.
It's going to be a tad breezy for ringing tomorrow, so I might have a look on the sea for a couple of hours instead. It is autumn after all, so I should be out doing something.
I read an article on BirdGuides about a new report that has highlighted the threats facing unprotected North American bird species, that complements a 2019 publication that hinted that two-thirds of Nearctic birds could end up at the risk of extinction. What a shocking statistic!
The Birds of Conservation Concern 2021 report, produced by the US Fish and Wildlife Service (USFWS), features 269 bird species under threat, of which none are currently listed under the Endangered Species Act!
The report did not assess the threat of climate change comprehensively, but a 2019 publication from the National Audubon Society (think BTO crossed with the RSPB) showed that two-thirds of North American bird species are at risk of extinction if nothing is done to address climate change. Two thirds! Just think about that for a moment.