On Monday morning I visited the Nature Park to hopefully ring a few birds, and it was only a few birds, and as soon as I arrived, I knew that would be the case. It was crystal clear above, and there was a low mist that I suspected would quickly burn off, and these conditions generally lead to a lack of grounded migrants and visible migration up in the stratosphere! I was right.
I ringed seven birds as follows:
Chaffinch - 3
Reed Warbler - 1
Greenfinch - 2
Wren - 1
In addition to the Reed Warbler ringed, the only other bird(s) that fell into the grounded category were two calling Chiffchaffs. As predicted, and alluded to above, the vis was virtually non-existent (or so high that it was beyond the range of my sight and hearing), and all I had were a handful of Meadow Pipits, Chaffinches and three Grey Wagtails over.
However, at 0955 I noticed all the Gulls had got up to the north of where I have my ringing base, and it was obvious that there was a raptor about, but I couldn't see it! After a minute of squinting at the sky, I picked up a large raptor circling over the marina. I lifted my bins, and it was an Osprey, or Fish Hawk to give it its old Scottish/Shetland name. 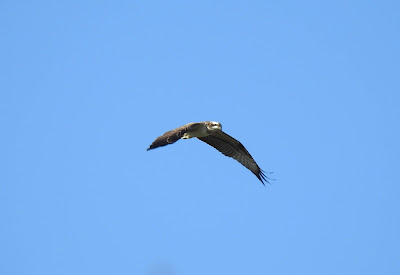 Osprey
For the next few minutes, I watched it circle to the north of me, and then it drifted south, funnily enough over the area that I put my nets up in. It then turned over the scrape, before heading north and ultimately east, and I lost it over the river.
I should have spent time just watching it, rather than trying to photograph it, as I took loads of shots of it, and they were all pretty awful. The one below isn't too bad, or should I say you can tell what it is at least! So, the Fish Hawk saved what was a fairly miserable morning.
The wintering bird survey season kicked off for me mid-week, with a visit to a site in west Lancs where I will be carrying out surveys, 24 in all, throughout the winter. The site consists mainly of arable farmland, with some wetland habitat, and a few hedges and ditches.
The day of the survey dawned with four oktas cloud cover and a 10 mph north-westerly wind. I had two vantage point surveys to do, with a transect route to and from the VPs. The area is known as a wintering area for Pink-footed Geese and Whooper Swans, but it is a tad early yet for any numbers of these two species, but part of the survey is aimed at monitoring the migration of these two species through the site, hence the September start to make sure the autumn is covered properly.
I did have a few Pinkies actually, 44 to be exact, that flew south over me. A group of nine Wigeon heading north was noteworthy, as was a flock of 61 Lapwings. There were lots of Woodpigeons around feeding in the stubble fields and I had 315 in total. The stubbles were also attracting Skylarks, and I recorded at least 31.
A male Sparrowhawk put up a flock of 21 Linnets, and a couple of Kestrels and five Buzzards also flew the raptor flag. A fly-over Great Spotted Woodpecker looked odd, as it 'bounced' over a large stubble field heading to the nearest woody habitat. Close to my second VP location is an area of woodland that very obviously contains a Rookery, and at least 110 of these 'baggy trouser' corvids were using the woodland as a roost, alongside twenty of their noisy Jackdaw cousins.
There was some vis, and in the main this was made up of the 81 Meadow Pipits that headed in a general south-ish direction, but I also had 29 Skylarks, four Swallows, two Grey Wagtails, five Alba Wags and a Greenfinch over.
I recorded just three warbler species; a Blackcap, a Goldcrest and two Chiffchaffs. Not the most exciting of mornings, but pleasant enough nevertheless to be out and about.
During the past week, I attempted to photograph some of the Garden Spiders in my garden, and I have posted a couple of pictures below. Amazing beasties! 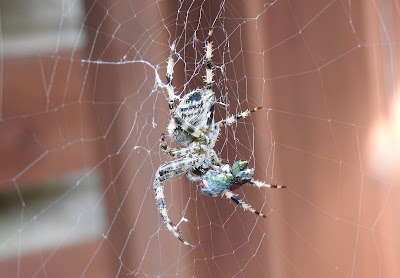 Garden Spider with prey (above & below) 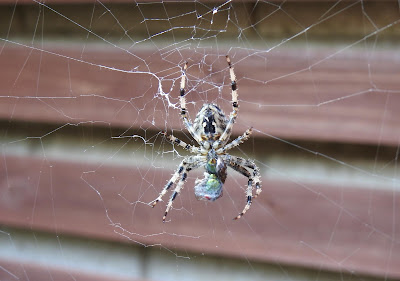 It was a very different morning when I was out ringing at the coastal farm fields, adjacent to the school, on 21st September 2014. It was fairly clear, and flat calm, conditions that you might expect to cause high-flying vis. But I suspect, that on this morning even though that was the case, the sheer number of birds inevitably meant that some were low enough for me to record.
I had 527 Meadow Pipits go south, and I even managed to count this number even though I was busy ringing as well, plus 819 Pink-footed Geese, 11 Swallows, 19 Skylarks and a Rock Pipit. I ringed 45 birds; 3 Robins, 26 Meadow Pipits, 4 Blue Tits, 1 Great Tit, 1 Chaffinch, 2 Wrens, 5 Greenfinches, 1 Woodpigeon, 1 Dunnock and 1 Blackbird.
I'm reccying another wintering bird survey site tomorrow, but hoping to be out at the Nature Park at the weekend as the forecast looks okay at the moment. I'll keep you posted.