For the past two mornings I have supposed to have been out ringing at the Nature Park, and on both mornings, I have been thwarted by the weather, despite what the trio of weather apps I use tried to tell me!
I use the BBC weather app, Met Office and XC, but there are many more. In fact, so many apps, that you will find the forecast that you are looking for, if you keep on looking, whether they are accurate or not! 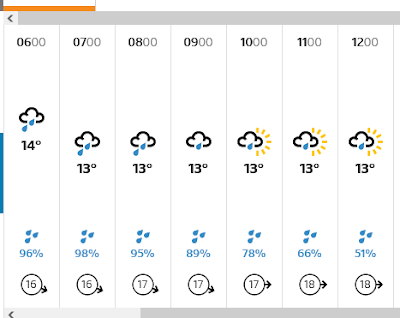 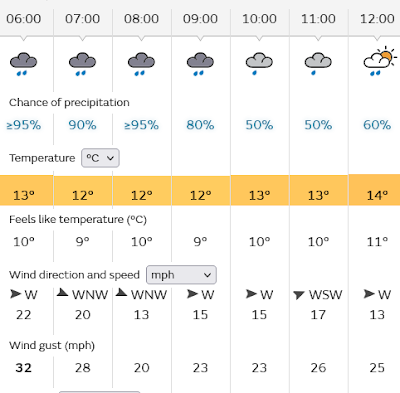 Yesterday morning, the BBC app was telling me that it would be dry, and winds would be light, great. The Met Office was giving me a more cautionary tale with the wind strength, and XC said the wind strength would be okay, but it would be foggy. What?!
It's not too early a start at the moment, and I got up at 5:30 a.m. yesterday. Checked the meteorological trinity of weather apps that I use, and no change. Had a look out of the upstairs windows to see if it was indeed foggy. It wasn't, so I got all my gear together, and headed to the Nature Park. As soon as I cleared the houses, and was driving across the farmland, it looked decidedly dreich! Low cloud, a tad misty and drizzle! So, XC was the closest on this occasion. I knew that it was pointless continuing, so I returned home.
This morning was virtually a repeat of yesterday morning, although I didn't get as far. The 'met trinity' on Saturday evening were virtually saying the same as Friday evening, with the 'Beeb' being the most optimistic, the Met Office somewhere in the middle, and XC the most pessimistic, still saying fog! Once again, I rolled out of my pit at 5:30 a.m., checked the mist/fog situation, and it was clear. I then checked the forecasts again, and they were all giving rain showers, and an increasing picture for the wind strength. Ringing was therefore off. I could see it had rained overnight, and as it had been dreich all day yesterday, overnight and into the pre-dawn morning, I didn't see any point in going out birding and looking for migrants. Another autumn day wasted.
On Friday, I was out reccying another wintering bird survey site on some more arable land in west Lancs. On my travels so far this autumn, whether birding or not birding, I've noticed a few Jays in areas that I don't know normally see them in, so I'm wondering if it's shaping up for a bit of a Jay autumn. 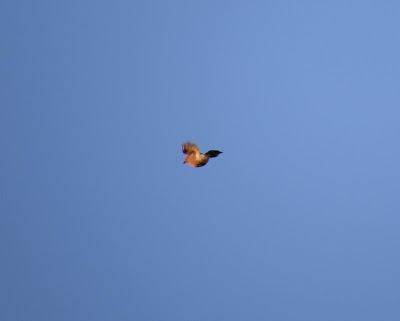 If it's a 'Jay' autumn, perhaps we'll get them moving along the coast like this
individual in 2014
At this site where I was wandering around looking for suitable areas to site two VPs, I heard a Carrion Crow alarm calling, and I looked up to see a small raptor mobbing the Crow. Lifting my bins, I could see that the small raptor was a male Sparrowhawk. The Sparrowhawk repeatedly harried the larger corvid, and eventually the Crow made good its escape. Thinking that was it, the Sparrowhawk moved away, but the Carrion Crow turned, and came back at the Sparrowhawk mobbing it, until they separated again for good, and went their separate ways. I suppose it was a case of a Sparrowhawk mobbing a Carion Crow, that was mobbing a Sparrowhawk!
On the drive I home I could see lots of Pink-footed Geese north of the river, that were coming in from the east, and moving in a south-westerly direction, presumably making use of the added lift by flying into wind, and generally heading in the right direction. 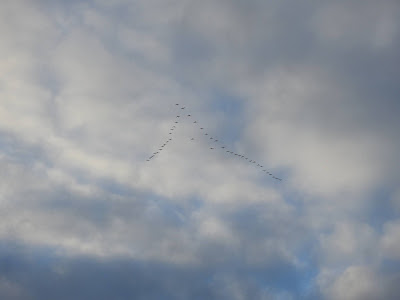 Looking ahead for the next ten days or so, there isn't a forecast without any rain in it at the moment. But as I always say "there's time for it to change", and I will try to remain optimistic despite what the 'met trinity' might say!