The Lancashire Bird Report 2020 was through the letterbox on Thursday. A welcome sight, something of interest for me to read, and a large-format publication with comprehensive accounts of the birds of Lancashire in 2020, accompanied by pages of excellent images by some of the best local wildlife photographers around. 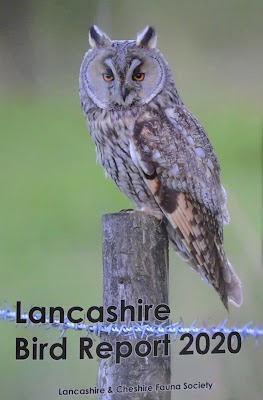 I soon found myself at page 125, where there was a full page coverage of the Stonechat, listed as 'Fairly common, increasing breeding bird in upland and coastal areas; fairly common passage migrant and winter visitor'.

There was over 1,200 reports of the Stonechat, and the reporting rate on BirdTrack showed it was reported across Lancashire and North Merseyside more frequently in most months than the same month in any of the past 10 years. It was good to read examples like, 'the total West Pennine Moors SSSI population is probably now approaching 100 pairs, the species is now widespread and common in many moorland edge/fringe habitats, in-bye and some moorland habitats'.

With the exception of two breeding records within the LDBWS area at the Langden and Hareden Valley's, there was no other mention of, passage, territorial, breeding, or wintering records in the LDBWS recording area. Perhaps not too surprising, when you take into account a year of the Covid-19 pandemic, resulting in a drastic reduction of coverage, and my personal inability to cover some of our upland areas, most notably in what was once the stronghold of Clougha/Birk Bank.

My only three Stonechat breeding records in 2020 were....

Hawthorthwaite 24 July pair with a juvenile

This record was seen as an autumn movement by these birds, they were observed in no more than a mile along and around a wall above the length of a track above the wind turbines on Caton Moor.

With my developing interest in Odonata, two records were of note, the recent colonist Keeled Skimmer, failed to move beyond Birk Bank Bog in 2020, and as usual very few reports of the Golden-ringed Dragonfly were received in 2020.

Note....According to my records, I think these two reports will read differently in 2021! 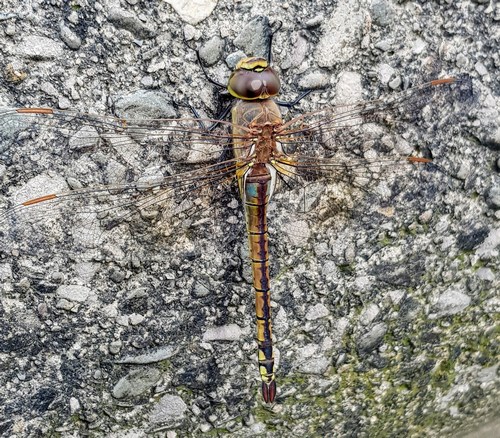 Other interesting reading in the report....The first confirmed sighting of Hairy Dragonfly, was of a male at Lunt Meadows in May 2020. A Lesser Emperor was at Birkdale in August, and 2 Vagrant Emperor, the first of which was a male at Little Thornton on 3 November, and the second six days later at Heysham Harbour on 9 November, was also a male. The Small Red-eyed Damselfly continued to spread in 2020, being found at several new sites around Liverpool, and the Large Red-eyed Damselflies remained confined to their two historic Merseyside sites at Eccleston in St Helens and Aintree. As a continental migrant, the Red-veined Darter is now expected annually in Lancashire, where the majority of records came from the Sefton Coast between Crosby and Ainsdale.

I'm grateful to Dave Bickerton and Steve White for permitting me to use material in the Lancashire Bird Report 2020. Also thanks to Richard and Kevin for their respective images, both permitted and much appreciated.

Up to 100 Pink-footed Geese >SW over Bowerham Friday afternoon courtesy of KT. Also I note 6 Whooper Swan at Nateby Saturday, courtesy of FBC.