Wednesday morning got off to a bad start when I arrived at first light at one of my two wintering bird survey sites in west Lancs. It was a glorious morning, with more or less clear skies, and a 15 mph north-westerly wind. The first decent day for some bird movement after several days of blocking wet weather.
The track that I usually drive down to park my car was very wet, and some heavy farm machinery had been using it to access the fields to lift some potatoes. I got half way down, and realised that if I continued, I would likely get stuck! However, my car didn't want to reverse along the wet and muddy track, so I had no option other than to drive to the end and turn round in the field if I could. Eek!
Amazingly, I did manage to turn round, and I thought that the only way I was going to get back to the road along the track was to 'floor' it and keep moving. And so, I did, and I spent the next half a minute or so driving along with full opposite lock! I had to park in the village, and this was a twenty-minute walk to my first VP, so it put me back a bit.
As I said before, this was the first morning where conditions had unblocked, and it looked good for some visible migration, and indeed numbers of Pink-footed Geese were arriving high from the north, and heading south. I was stood at my VP, and I hadn't even had time to set my 'scope up, because I was busy counting all the Pinkies going over. 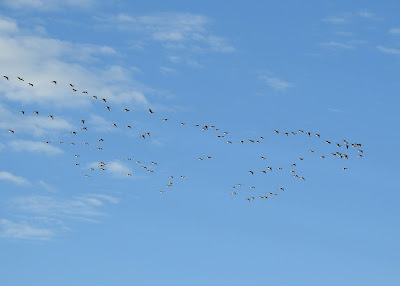 Pink-footed Geese
I was counting one skein of Pinkies, when I noticed a pale bird, similar size to the Pinkies, at the tail end of the left-hand side of the 'v'. I lifted my bins, and was surprised to see that it was an adult 'white morph' Snow Goose! No photo I'm afraid, as my camera was in in my rucksack. There's always an issue with wildfowl as to whether individuals are genuine vagrants or not. There is no doubt that Snow Geese are a genuine vagrant to the UK, but telling a genuine vagrant from a 'fence hopper' from a wildfowl collection is impossible to tell. However, a Snow Goose arriving with lots of Pinkies high from the north, is probably of as genuine provenance that you could hope for.
I had 2,984 Pink-footed Geese in total, and most were heading high to the south as I said previously. There were some smaller groups coming back north and west, and were probably re-orientating themselves to head to favoured feeding areas. I also had my first Whooper Swans of the autumn with a group of 14 heading west.
As the morning wore on, it warmed up, and this gave perfect conditions for the three Buzzards that were making use of the thermals. The only other raptors that I had were a female Sparrowhawk and a Kestrel. I had three Jays, that continues to support my thoughts about it being a Jay autumn/winter this year. 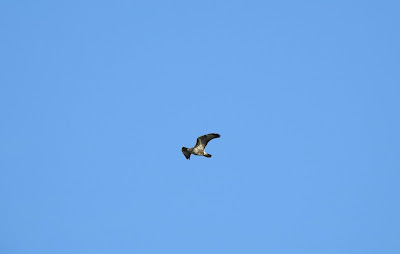 Buzzard
There was some vis, but surprisingly not as much passerine movement as I might have expected. All heading in a general south-ish direction, I had 16 Swallows, two Grey Wagtails, six Meadow Pipits, eleven Chaffinches and a Siskin.
There were a few Chiffchaffs around and I recorded three, but only one Goldcrest. Goldcrests do seem to be thin on the ground this autumn. A flock of 22 Linnets and 12 Goldfinches were mobile, and passed me at my second VP several times. The five hours passed very quickly, and it was soon time to return to my car.