After Saturday’s disappointing foray into the hills Andy and I turned our attention back to the flat fields of Cockerham on Sunday morning. There was zero wind and a cold start until the sun rose to warm the air. We employed two nets only, one in the seed plot and one in the nearby trees, a fast job of setting up that took all of 15 minutes and so much quicker to pack away. And much closer to home for the drive back- for me at least!
There was a somewhat slow start with 4 Linnets caught in the first hour. Fortunes bucked up quickly and then a good catch of 37 birds with some superb bird watching in-between.
For once it was Greenfinches that topped the catching chart, not Linnets. All new birds no recaptures - 19 Greenfinch, 13 Linnet, 2 Reed Bunting, 2 Wren, 1 Chaffinch. 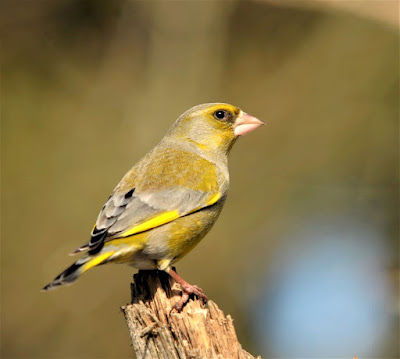 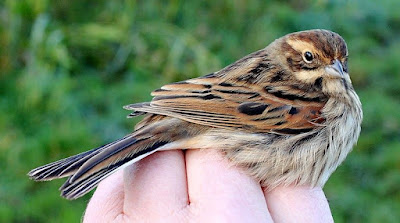 Chaffinch
Thanks to watchful crows we’d had early but brief views of a Peregrine, an hour or so later bettered by the sight of a Peregrine chasing a Wood Pigeon across the open field in front of us. It all happened very quickly but the pigeon proved up to the challenge by diving into the nearby copse where the Peregrine would not venture.
Later, the morning turned out so warm, inviting and spring like that we agreed “October 10th, it’s not too late for a Marsh Harrier”. Sure enough within 30 minutes a “cream top” arrived from the east, put on a gliding/hunting display and left quite quickly to the south and in the direction of the inland mosses.
This is the Marsh Harriers’ usual route here; today’s the latest of four autumn sightings of the species. They arrive from the north or east after a journey around or across Morecambe Bay and then fly inland on a direct southerly or south west heading. Their slow but purposeful method of flight allows them to migrate while hunting over suitable landscapes of marsh, reedbeds, and farmland where they find favoured foods like frogs, small mammals and birds, such as moorhen and coot. 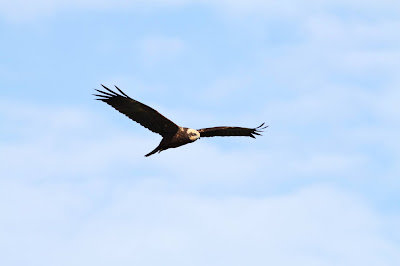 Marsh Harrier
It’s virtually every Linnet catching session that a Sparrowhawk or two appears looking for a meal. The hawks are drawn in by the sight and sound of 200 and more chattering Linnets, in the air or feeding in the seed plot. This morning was no different as a young male Sparrowhawk appeared as if from nowhere to single out a Linnet but once again failed to catch.
I’m not sure what the success rate is hunting Sparrowhawks but imagine that here at least it is quite low. Sparrowhawks that hunt by surprise tactics in suburban gardens seem to do much better than these probably inexperienced youngsters.
Not to be outdone and just as we were ready to leave the crows found us a Buzzard that circled above to give great views in sunny sky. After a couple of circuits the Buzzard too drifted off in a southerly direction. 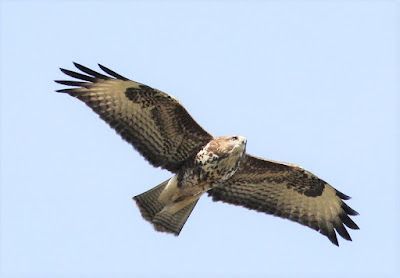 Buzzard
All three raptors, Buzzard, Sparrowhawk and Marsh Harrier are migrants through this part of Lancashire, their numbers increasing in the autumn as young birds disperse and adults wander in search of consistent and good feeding. The Peregrine is a winter visitor to these lowland and coastal areas where concentrations of waders and wildfowl provide rich pickings for the supreme hunter. 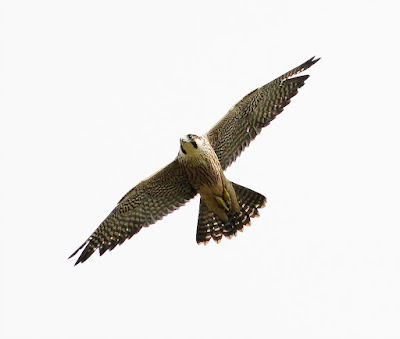 Peregrine
That's all for now. Back soon with more news, views and photos.