The forecast on Friday evening didn't inspire me with confidence for my planned ringing session at the Nature Park on Saturday morning. I spent quite a bit of time outside in my garden after dark listening for migrants, Redwings in particular, and gazing up at the sky to see if I could get any clues regarding the weather. I didn't hear a single Redwing, and the cloud was low, and it looked a tad murky to me.
The plan was to get to the Nature Park in the dark Saturday morning, and get at least one net up in the darkness and put Redwing on the MP3 player. I was up at 6:00 a.m. and stood in my garden again for a while, and there wasn't any Redwings going over, and that cloud base was still low, and again it looked murky. The only saving grace was that the wind was south-easterly in direction. I must admit, in view of the weather conditions I struggled to motivate myself to go out and put some nets up, when my 'gut feeling' was that there wouldn't be any migrants grounded, on vis, or otherwise. But that little over-optimistic voice in my head said, "it is October after all", so off I went.
Driving there I could see some light drizzle on my windscreen, and wet I hit the farm fields, looking both east and west the cloud base was low; not good. Anyway, under full cloud cover with a 10 mph south-easterly wind I put up a couple of nets in the reedbed and scrub.
A couple of singing Cetti's Warblers kept me company as I put the nets up, as did one or two ticking Robins. The Starlings exited their reedbed roost, but only 200 now. The reedbeds here are just a summer/early autumn roost, and the large winter roosts locally are under the piers at Blackpool, and at Leighton Moss and Marton Mere nature reserves perhaps.
A telephone conversation with Ian during the morning told me that the whole of Morecambe Bay was 'locked down' with murk to the east and north, and hence the lack of any migrants. The vis was less than a dribble, with just single figures of Grey Wagtail and Skylark. Two Stonechats are now on site, and it is likely that they will over-winter.
I have noticed that over recent weeks, late summer into autumn, Blackbirds have been thin on the ground, probably as a result of the long dry spell we have had through this period. They will have struggled to forage for ground invertebrates because of the dry ground conditions. So, the three very active, bordering on agitated, Blackbirds I had this morning will have been continental migrants.
I ringed twelve birds as follows:
Chiffchaff - 1
Wren - 1
Goldcrest - 1
Robin - 1
Chaffinch - 1
Greenfinch - 7 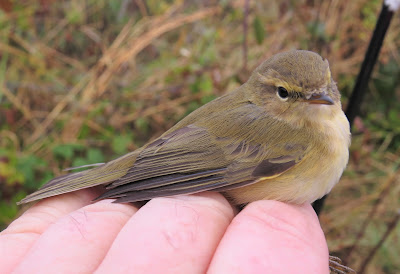 Chiffchaff
Sunday morning the wind had changed direction to a stiff north-westerly, too windy for ringing, and the worst wind direction possible for birding, so a few pints of real ale beckoned instead!
I was out doing a wintering bird survey this morning, and it was very quiet, and I couldn't justify writing a separate blog post detailing this morning's exciting sightings, because there weren't any, well, except one that is!
It was north-westerly again this morning, so not good, and I had five oktas cloud cover. The last time I was at this site it was the first decent morning after several days of rain, and lots of Pinkies were on the move, and if you remember, I had a Snow Goose over with some of those Pinkies. This morning I had another good bird on vis, in the form of a Lapland Bunting! I think I was nearly as surprised, as I was with the Snow Goose. As usual with these things, I didn't get any 'crippling' views, just a chunky bunting flying over calling like a Lapland Bunting! Quite bizarre, but it is October after all! 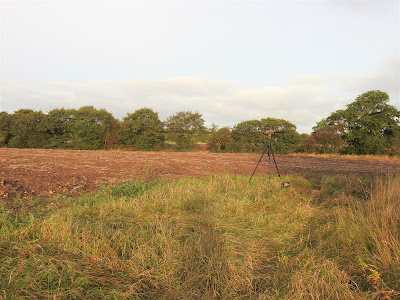 One of the VP locations at this site
And it didn't get any better, it really was quiet. If I was to scrape the ornithological barrel for some highlights, they would include 222 Pink-footed Geese, 59 Stock Doves (a good count), six Snipe, two each of Buzzard and Kestrel, 139 Jackdaws, 93 Rooks, 13 Skylarks, singles of Song Thrush and Tree Sparrow, a Grey Wagtail and a Reed Bunting. I said it was quiet!
It's north-westerly again tomorrow, and there's going to be some rain around during the morning, so it will be Wednesday before I'm out again on another survey.
In other news, Gail and I installed a Hedgehog house in the garden yesterday, to see if the Hedgehog that we feed every night would use it. We set our trail cam nearby, and the Hedgehog was going in and out of it straight away! We put some hay in it for bedding, and when we recovered my trail cam, we could see that the Hedgehog had taken some leaves in. Brilliant! 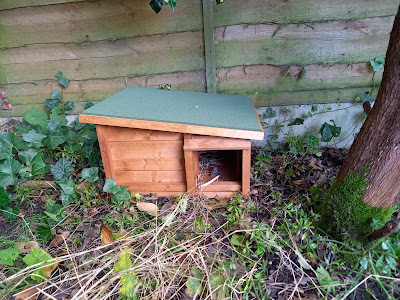