I finally managed to get out ringing on Saturday morning, and an early start resulted in a few Redwings being ringed, but more of that later.
The weather during the week has been disappointing to say the least, and I struggled to get the second wintering bird survey completed at one of my sites. I had a window of opportunity on Wednesday morning that I took, but during the morning I had a few light showers, but not enough to abort the survey.
As I set off walking along the margin of one of the arable fields towards the maize crop, a Buzzard was perched up in a dead tree, and in the dreich half-light it didn't see me until I was close. It was far too dark for a photograph, and if it had been lighter, I wouldn't have got anywhere near it. In the same field were three Roe Deer, and as soon as they saw me, they were off.
I didn't have as many Pink-footed Geese as in recent surveys, and I just had 910 in three skeins flying north from their Ribble roost to feeding areas north of the River Wyre. There are a few ponds within my survey area, and at one of my VPs, I look down towards a couple of ponds where seven Teal were flying round, until they decided which pond to drop in to.
Most of the stubble had now been ploughed and tilled, and I'm guessing sown with winter wheat. As a result, there were far fewer Woodpigeons, and all I had were 13. There was still a good number of Skylarks around, and I recorded at least 66.
The ploughing was inevitably attracting gulls, and 215 Black-headed Gulls, a Common Gull, 46 Herring Gulls and a Lesser Black-backed Gull, were all taking advantage of the feeding opportunities presented to them. It was the same with Jackdaws and Rooks, as the maize crop had been harvested, 228 and 122 respectively, were feeding on discarded cobs in the stubble.
I mentioned a Buzzard earlier, and I had another two, as well as two Kestrels. I also had two Peregrines, a male and a female perched on a pylon, the male was at the very top of the pylon and the female about half way down.
I just had a few Redwings here, 14 that's all, as well as two Song Thrushes and three Blackbirds. A couple of Tree Sparrows called from a hedgerow adjacent to the now harvested maize field, and a flock of 63 Linnets were mobile in some cereal stubbles.
As I mentioned before, it was a dreich morning, and as a result there was absolutely no vis to speak of, other than perhaps very local movements e.g., the Pinkies.
Returning to Saturday morning, it too was another dreich morning, and when Alice, John and I arrived at the Nature Park in the dark, we had full cloud cover, with some light rain and a south-easterly breeze. The light rain eased very quickly, and we got three nets up in the dark. However, I had been out listening for Redwings the evening previously without success, and none were calling this morning either. Nevertheless, we still put 'Redwing' on the MP3 players, and it did pull a few of these northern thrushes in.
We ringed 40 birds as follows (recaptures in brackets):
Redwing - 8
Reed Bunting - 3
Goldfinch - 13
Cetti's Warbler - 1
Robin - 1
Blackbird - 1
Greenfinch - 13
Long-tailed Tit - (1) 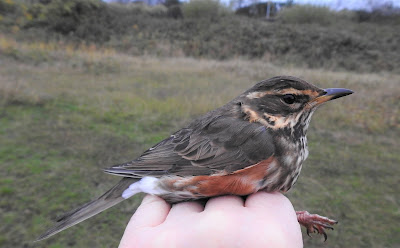 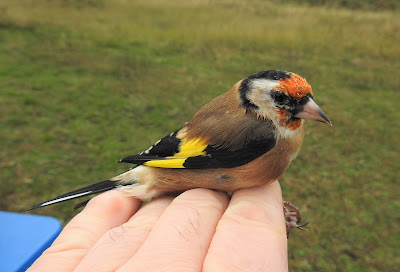 We also had a bit of vis this morning, including 30 Redwings, two Chaffinches, 530 Jackdaws, 20 Woodpigeons, a Meadow Pipit, 13 Siskins and three Bramblings. The direction of movement of visible migrants is always interesting. During the autumn, a number of the finches head east, and this morning was no exception, with the Chaffinches, Siskins and Bramblings all heading east. The Jackdaws and Woodpigeons however, were either moving west or south. It's probable, that the westerly moving birds, turn and head south when they reach the Irish Sea coast, which is only 2.3 km from the Nature Park, as the Jackdaw or Woodpigeon flies!
A Little Egret, Goldcrest and a Sparrowhawk made it in to my notebook, but there were no Starlings roosting. And that was it, but at least it was good to enjoy a few northern thrushes at last!
An update on our hedgehog house in the garden; it's being used! Our regular hog has moved in, and he/she has been bringing in their own nest material to add to the hay that we provided. See picture below. 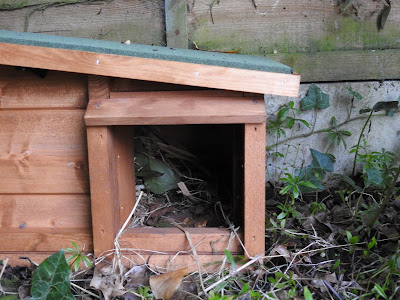 Hedgehog house with nest material
I've got four more wintering bird surveys to get in before the end of the October, and at the moment the forecast for that period isn't very good. I'll have to keep everything crossed!