The Safari had the most awful b & b digs we've ever had at which we had to meet IH later that evening. How bad were they? We managed to stay three nights, the other guests didn't, one couple didn't return after going out for their evening meal and on the third night the second guest did a runner at 04.00 hours! Thankfully we were due to move to a self catering cottage for the rest of the week. Why was it so bad? Well no cooked breakfast for a start...well ok we can cope with that, plenty of cereals, toast n stuff on offer and we're up early for quick start anyway but some of the cereal packs had 'life' crawling around in them and the milk was 'only' 10 days out of date. Put-you-up beds from the 1950s had the potential to destroy  an iffy back but thankfully didn't. Add to that carpets that were stickier than a 1980s nightclub, very dubious washing arrangements, the creakiest stairs in the world that played a chord on the guitars on the little landing half way up as you passed. A plethora of cats and bowls of half eaten cat food scattered around added to the ambience. Beer in the local pub 100 yards down the street was very good though. The only slight silver lining is that it'll give us a talking point for years to come.

Anyway whinge over back to the birding. No IH has a bit of a reputation for weather at the moment, when he's been out with us on recent safaris the weather has invariably taken a turn for the worse and interrupted the wildlifing. Today was no exception although the 'worse' weather turned out to be 'too good' weather. Light winds, from the wrong direction, and clear skies meant all the decent birds from yesterday had cleared out over night. There was a bit of passage ging on but it seemed more likely to be British birds on the move rather than the hoped for incomers crossing the sea from Scandinavia. A few Redwings and Bramblings  were about but mostly it was Linnets, Reed Buntings and Skylarks on the move with smaller numbers of Meadow Pipits and Chaffinches. The highlight of the day came early with a Yellow Browed Warbler being caught, ringed then shown in the Church Field. 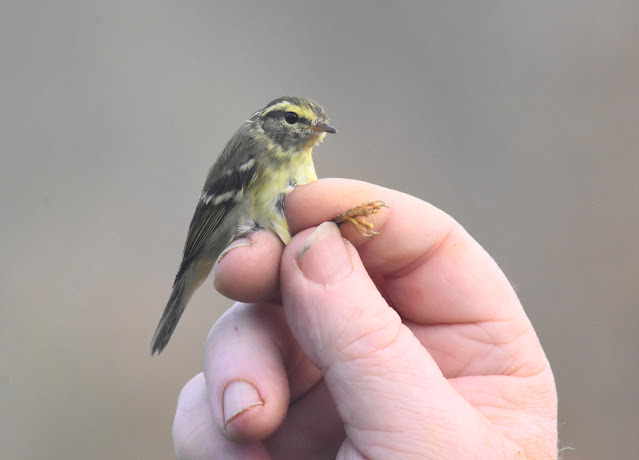 Always nice to see these little sprites. But would we see one in a more natural setting, they'd been noticeable by their absence so far this season.

A trio of Pale Bellied Brent Geese were on the river at high tide but seawatching didn't trouble the notebook too much with just a couple of Arctic Skuas to add to the usual Red Throated Divers, Gannets and auks.

A walk up the canal gave nothing but a smattering of Reed Buntings, the usual Spurn cry of 'Wawazzat?' was invariably answered with 'just' another Reed Bunting...another birder did say you should never say 'just a', all birds are equal but some are more familiar than others. We did get a large raptor coming down river which turned out to be a Marsh Harrier rather than a Buzzard when it came close enough to get an ID on.

Nothing of note at the wetlands save for over 50 Mediterranean Gulls, great to see so many together. There were some big skeins of Pink Footed Geese moving overhead too and a second We had a second Marsh Harrier. But with little to keep our attention we moved up to Beacon Pond having another look at the farm yard Little Owl on the way. The hedge gave us our first Goldcrest of the trip, well in to the third day - shows how little was on the move normally at this time of year the place is hooching with them. Also in the hedge was this big spider's web. One for all things spider, AB, we thought so fired off a few pics to send to him for perusal later. 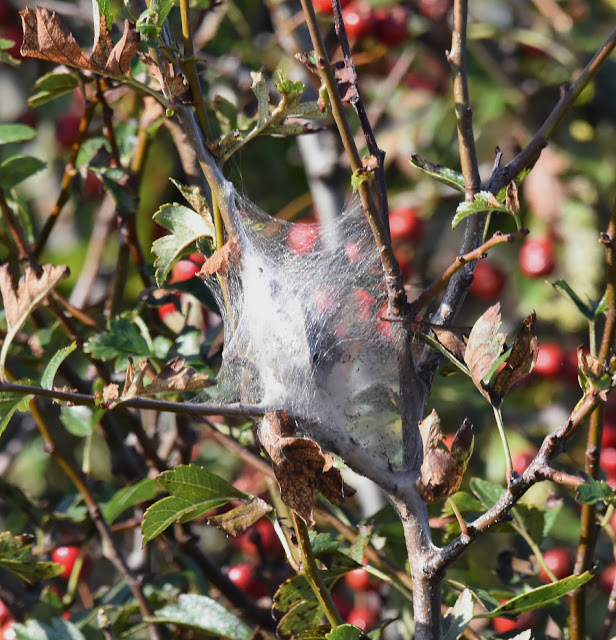 But on closer inspection you can easily see it's caterpillars inside, note the frass on the bottom right-hand corner too, so nothing to do with spiders at all. Beacon Pond was quiet again but that gave us the incentive to properly count the Little Grebes which after several attempts to come up with a consistent figure 12 was the final result including two that were sat out of the water on a clump of bankside vegetation, not something we see very often outside nesting season. They're easier and quicker to count if they didn't dive so much too. Some were catching fairly large fish, quite a bit bigger than the usual 3-Spined Stcklebacks we often see them bring to the surface.

A late afternoon seawatch gave us a Fulmar and a couple of Arctic Skuas but we missed all the action IH was describing as a Peregrine mounted a prolonged attack on a flock of waders coming in over the turbines. After nail-biting stoops, chases and last minute manouevering eventually all waders came in safe and sound and the Peregrine went hungry.

After dinner we went for a look at the Short Eared Owls up at Sammy's Point. At the car park a Kingfisher darted past us probably coming off the river before flying over the fields then along the laneside dyke. It was almost dark before we got the briefest of views of just one of the Short Eared Owls.

On the way back to the digs from hell a Short Tailed Vole scurried as fast as maybe across the road in front of us.

Friday dawned very foggy - we told you IH was a jinx with the weather. Seawatching was going to be a non-starter - we couldn't see the sea! So we had a look around the church yard and pub car park for any sign of overnight grounded migrants. The trees bushes and hedgerows were just about devoid of life but on the river from the pub there was a close in Razorbill just about visible about 30 yards out. Best 'bird' was a Grey Squirrel sat atop one of the roadside telegraph poles 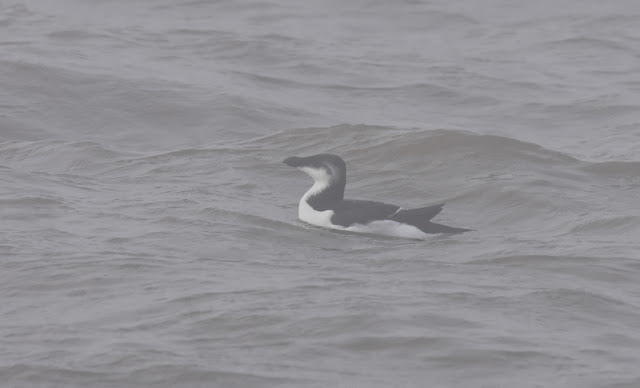 LCV joined us as the fog began to lift and hopefully three pairs of eyes would find more birds than two. They didn't. The rest of the morning was pretty much birdless although a disappearing Merlin was a nice addition to the trip list as was a Great Spotted Woodpecker, as was a Cetti's Warbler at the pond by the gate. Quite a lot of more northern folk still didn't see these too often so it's still a bit of a star bird but not for us - won't say we're sick of the sight of them cos we don't see them that often but we do hear them all over the place now. We totally missed the Bearded Tits in the same area though. A lucky shot of the Merlin just about caught it in focus as it disappeared in to the wild grey yonder over the river. Unfortunately and unbeknown to us it came back a little later and ended up in the ringers' nets and was then shown to a small no doubt appreciative crowd. 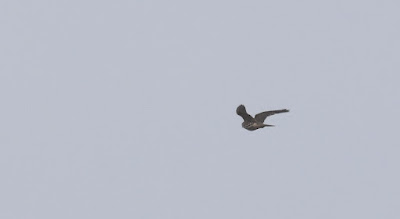 A big breakfast/brunch at the visitor centre had us watching the feeders, mostly Tree Sparrows this morning and a terrestrial visitor too if you watched closely - it didn't like to show itself out in the open. 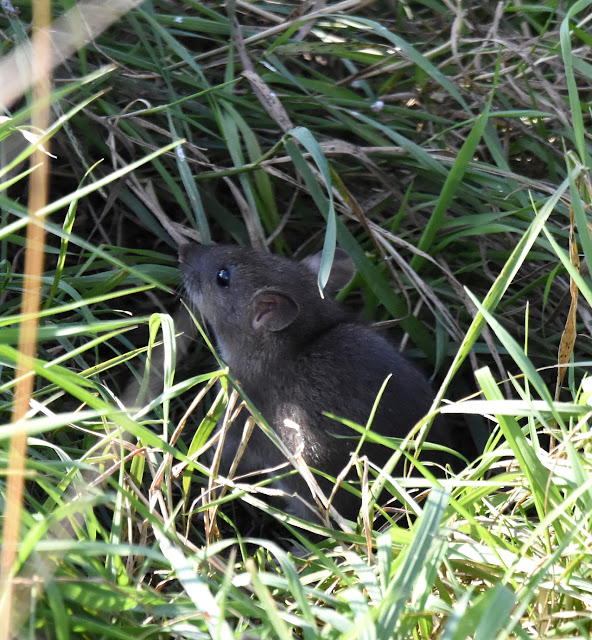 After scoffing our meal it was back to the wetlands for more Mediterranean Gull action but still no return of the Caspian Gull. At least the Little Owl was still showing in its usual spot and we were able to put a family of newly arrived birders on to it. Up at Beacon Pond LCV's extra pair of eyes helped increase the Little Grebe count to 15. Had we missed three yesterday or were they new arrivals? A pair of Kestrels sat on the wires by the car park gave exceptional views through the bins. 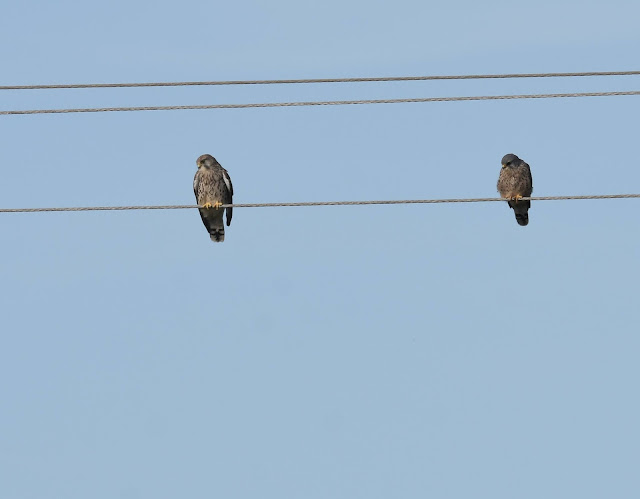 Sadly IH was time limited and had to leave us shortly after lunch. After saying our goodbyes we wandered about the bushes not seeing much before heading out to Sammy's Point again.

This time there were owls to be seen - probably because a bloke with a dog was walking very close to their roosting area. We had at least five out together, four of which were sat in the crop field away from the man and dog. Fortunately the owls made the most of the calm weather after he'd gone and started to hunt the rough fields. Like most of the assembled crowd we filled our boots, or at least our SD card. 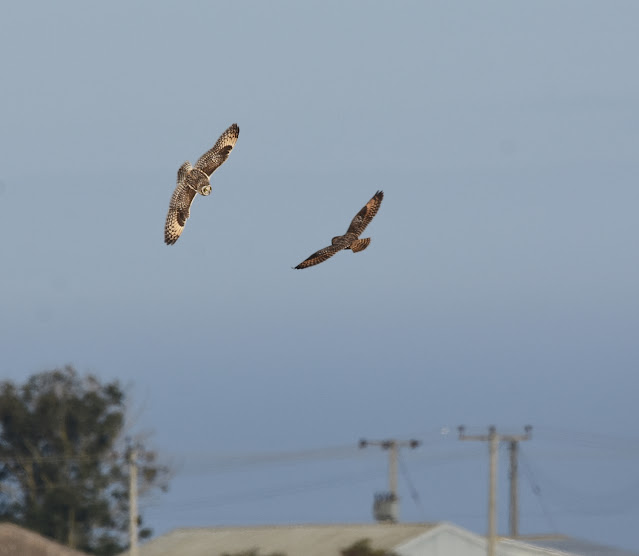 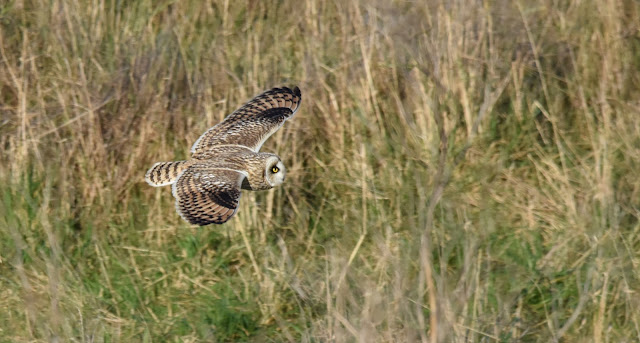 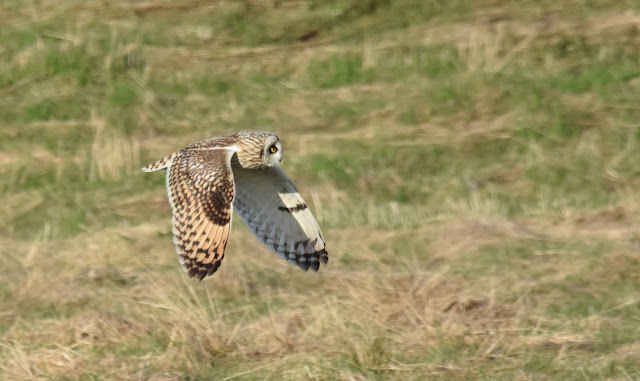 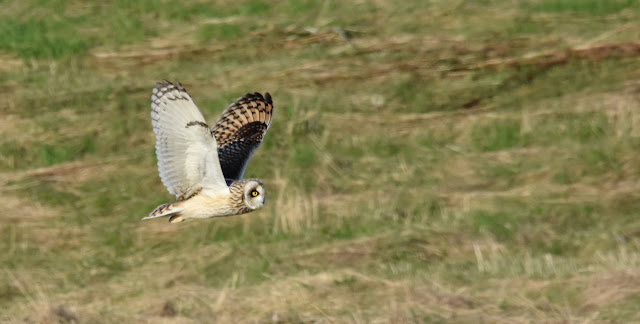 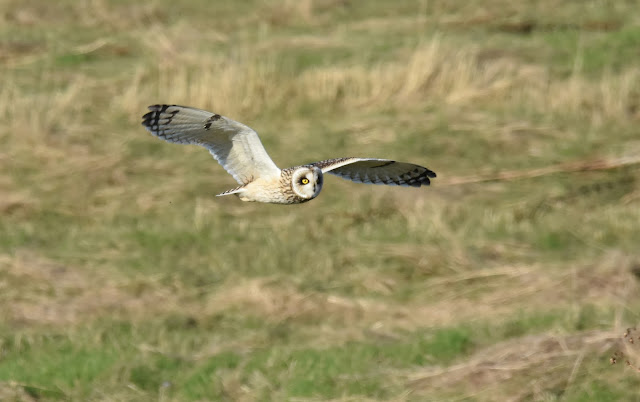 We can report that on this occasion everyone was well behaved and stayed on the track overlooking the fields - there had been some numpties taking their cameras into the field and disturbing the owls - - absolutely no need they come close enough if you stand still and wait up by the fence.

And so ended another grand day out exploring what Spurn had to offer. Off to much more salubrious digs. Our species list for the trip is now up to 82 birds and 8 mammals.

Where to next? We'll finish our report shortly with perhaps some surprising (or possibly not) news.