On Monday I was back at the same wintering bird survey site, and this time the weather wasn't as good, and it had a noticeable effect on bird numbers. I started the survey under 7 oktas cloud cover, with a 15 mph south-westerly wind, and finished it with a 20-25 mph westerly wind and rain!
There were no Whooper Swans sadly, and Pink-footed Geese only numbered 115. There were 38 Mallards on the fishing lake, but I only had two Teal. I say two Teal, as there was probably considerably more than this, as I recorded the call(s) of Teal from two different ponds.
The vis was virtually non-existent, other than 14 Woodpigeons, six Skylarks, a Redwing, a Grey Wagtail, five Pied Wagtails, a Meadow Pipit, 21 Chaffinches, 13 Linnets, a Goldfinch, a Siskin and a Reed Bunting. Raptors included five Buzzards and three Kestrels, but none of the Peregrines from Saturday.
On the former maize field, that has now been ploughed, tilled and probably sown with winter wheat, at least 120 each of Jackdaw and Rook were foraging here. There were still Skylarks in the remaining stubbles, and I counted 58, and with them were 23 Linnets and seven Reed Buntings. 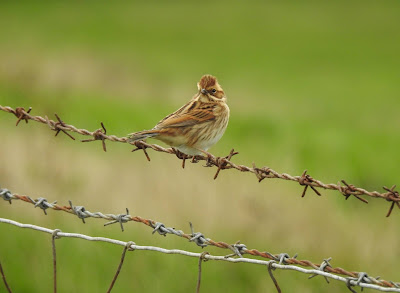 Reed Bunting
A female Stonechat was new in, and two Cetti's Warblers were again singing from two different locations on site. A Goldcrest in a Hawthorn hedge, was the first for a while, keeping company with just one Tree Sparrow this time. I recorded 40 species in total, but the above are just the meagre highlights. 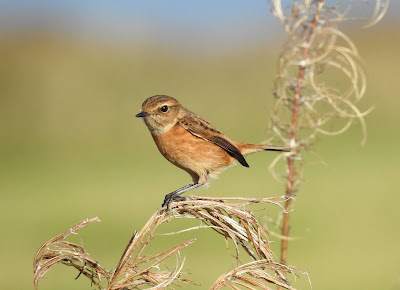 Stonechat
I type this after a cancelled site visit on Wednesday morning due to heavy rain, again, and I've still to get another survey in before the end of October. The forecast is poor until the end of the week, so we'll see!