As predicted, rained off for the whole of this week. And it's looking like no birding, ringing or photos until next Wednesday. Luckily I found this entertaining but cautionary tale in the blog archives from December 2017, a true story with as much relevance today.
"The bird was easily found in the exact spot that Mr Tarry had described. It was quite approachable. The mainly sedentary African and Middle Eastern species, the second only record for Britain and Ireland.  This large 17–18 cm long wheatear breeds in stony deserts from the Sahara and Arabia across to Iraq where it is largely resident. The one and only previous record a male bird on 1st-5th June 1982 in Suffolk arrived on the back of a conveyor belt of winds straight from North Africa."
Little wonder then that a twitching frenzy kicked off on 1st December 2017 when the potential Second for Britain turned up in a Scunthorpe garden - a White-crowned Black Wheatear Oenanthe leucopyga. 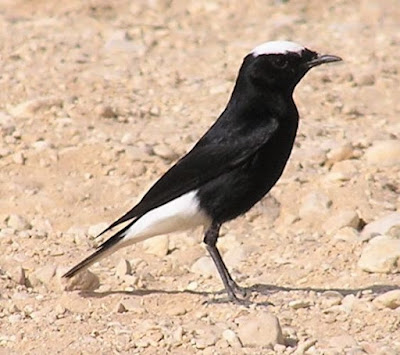 White-crowned Black Wheatear -By Nir Ofir - CC-BY-SA-3.0 via Wikimedia Commons
Following online discussion and some thoughts that the exotic Scunthorpe wheatear might be an escape or even a hoax, parking areas for twitchers were organised, just in case.  Online chat came up with a few recommendations and advice for those interested in in the twitch, but one or two comments were less than enthusiastic.
"There were plenty of birders there, all walking around the estate, looking. The bird had been in the vicar's garden the previous day. It seemed to be the talk of the neighbourhood as everyone had photos."
“It's at a church - please be considerate. They're not used to crowds.”
“Hi Folks. I am the person who posted the sighting of the bird. I took the photos yesterday morning. It is not a hoax and I am getting a bit fed up of such comments especially on Twitter by some which I find unnecessarily offensive.”

"Yours for as little as a hundred pounds".
"Do not even approach the gate or the lady inside the bungalow will come out swearing and literally set her dogs loose on you. Not one of life's cheeriest souls."

Nonetheless a pack of twitchers assembled early on the Saturday morning of 2nd December for the potential tick. The bird obliged, maybe a little too well, showed to within feet and also accepted meal worms thrown by the admiring crowd.
It wasn't long before a local came forward and admitted that the wheatear had escaped from his aviary.  Hours later, a member of the assembled crowd was able to recapture the bird by throwing his hat over it and the wheatear returned to its cage as the assembled throng went back to studying their pagers. 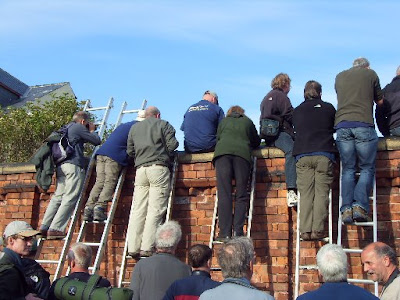 Twitchers - G Bagnell
The wheatear’s erstwhile keeper showed some of his other birds. He had a male Desert Wheatear, a male Siberian Rubythroat, a male Stonechat, a male Blackcap and a male Lapland Bunting in aviaries in his garden. 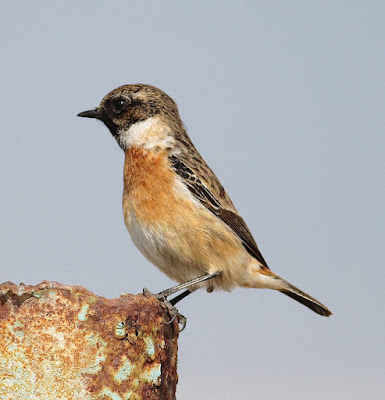 Stonechat
In the past he had bred things like Forktails and Pittas as well as many other softbill species, but being nearly 80 years old he advised that he was gradually giving up keeping birds. It was perhaps the best idea he’d had for a while since he also admitted that he had lost two White-crowned Black Wheatears in the previous few weeks.
A few thoughts. Maybe as bird lovers we should be concerned that a White-crowned Black Wheatear was in UK captivity in the first place? Who imported the bird and probably others? Was it bred in captivity and if so which country did it come from and how did it get into the UK?  Perhaps we should also question the origins of many birds in captivity given the Chinese and SE Asian illegal trade in wild birds and the laxity displayed in the supposed regulated cage bird trade in parts of the European Union, most notably Holland and Belgium?
Meanwhile, even a cursory look on the Internet reveals that as well as the expected parrots and lovebirds, there is a healthy UK trade in pipits, larks, finches, plovers, doves, raptors, owls, ducks and geese. I am told that Bearded Tits are a favourite bird of aviculturists and that even your garden Robin may be an impostor.
As birders we should always question the origins of any bird we are expected to twitch and initially at least, err towards the sceptical point of view rather than accept everything at face value before we jump in the car and expensive petrol jaunt. After all, as we are constantly advised by mainstream media, saving the planet from extinction will benefit birds as well as any bird watchers left behind?
So good friends, take care out there in the Birding Jungle. It’s a perilous place full of traps and pitfalls designed to catch the unwary soul.
Also, I am reliably informed that there are a good number of escaped and potentially dangerous cockwombles on the loose. Don’t worry unduly as they are easily identified by their habit of carrying a Smart phone and/or pager wherever they go, a nuisance easily neutralised by you throwing the machines over the nearest hedgerow. 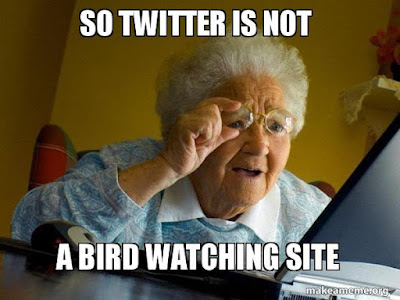 Back to normal soon - when the rain stops.