I was amazed that Gail and I manged to get my last wintering bird survey for October in on Saturday. It's been a week of constant wind and rain, more than a bit dreich, and the forecast was relentless. I had no choice to keep rolling it over to the following day, but by the time we got to Saturday (30th) we were nearly running out of October!
We had an afternoon survey to do, and we knew we would get wet, but the forecast promised that it would clear as the afternoon wore on. Now, annotating a map with species codes, activity codes and flight direction etc., isn't easy when it is raining! The map very quickly becomes a soggy ball of wet paper! I have a 'weather writer', which is basically an A4 clipboard with a clear pop-up cover, allegedly allowing you to continue to write/annotate maps in the rain. I say allegedly, because in practice they don't work either. There are two issues. One is that it is virtually impossible to write towards the top end of the weather writer because this is where the pop-up cover joins, and it is impossible to hold a pen/pencil upright here! The second issue, is what I call 'wet sleeve' syndrome. If the weather writer is keeping your paperwork dry, as soon as a wet sleeve has ventured under the pop-up cover a time or two, it will no longer be dry. So, we deployed plan B, and that was to have a big umbrella that Gail could hold over us both if it was raining hard, so that I could annotate the maps in relative dryness. And it worked!
We set off under 7 oktas cloud cover, with a 15 - 20 mph westerly wind, and frequent heavy rain showers at first. The rain eventually stopped, and the skies cleared to at least 2 oktas, and dried us out. Walking across the recently sowed arable fields was a bit treacherous, as the tilled earth had turned almost to a type of slurry with all the recent heavy rain, and every few steps you sank in above your ankles, which was a bit disconcerting!
With it being a late afternoon survey, I did expect to see a few roost flights of Pink-footed Geese, but with the wild weather we have had of late, I suspect that for the past few days they will have been feeding very close to their roost sites. As a result, we only had 104 go west.
The most numerous species we recorded was definitely Woodpigeon, and we had at least 94. They were all feeding either in berry laden Hawthorn hedges, or I suspect on the fresh and tender shoots of emerging winter wheat! 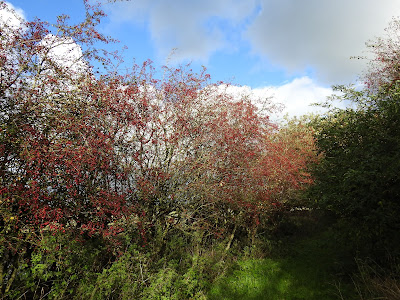 A berry laden Hawthorn hedge along one of the former toll roads that cross
the site.
Waders were thin on the ground, and all we had were four Lapwings and two Snipe over. A Little Egret heading southwest during late afternoon was probably heading towards a roost site on the river, and as the clouds cleared, and the sun came out, we had three Buzzards on the wing.
There were a few winter thrushes in the hedgerows, in the form of three Song Thrushes, 22 Redwings and five Blackbirds, and these were joined by a single Goldcrest and nine Long-tailed Tits.
On the arable fields we encountered seven Brown Hares, probably one of, if not my favourite mammal. A Common Frog entertained us at our second VP watch-point, as it made its way from the tilled field, to the grassy margin alongside. 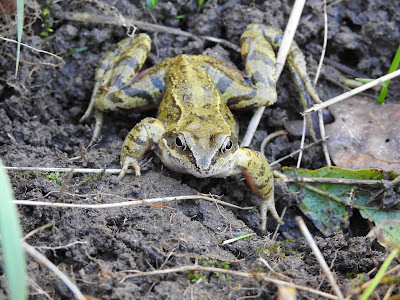 Common Frog
The forecast is looking good, for a change, for the next few days, so it should enable me to catch up on some more surveys.