The Safari was supposed to have a reunion with a couple of very good old friends we've not seen for well over 20 years. A 'booze cruise' round the bars and pubs of Scouseland was planned and train tickets bought...just going on a train would be an adventure in itself, it's a few years since we've done that. But one of the crew members came down positive for the dreaded Covid at the last minute so an emergency Plan B had to be hastily devised.

We shot down the motorway to pick up AH who we'd fortuitously bumped into after all those years going for a bag of chips in a chippy we didn't know existed until we were about to set foot through the door when he came out. While waiting for him outside his home watched a large party of Long Tailed Tits work their way through the front garden bushes and heard Whooper Swans passing over. Once in the car AH told us there were two of them heading northwards. And so off we drove aiming for an old favourite AH hadn't been to for maybe at least 25 years, Leighton Moss RSPB reserve.

Half way up the motorway an absolute deluge struck, well that wasn't in the forecast which had suggested a decent day...and neither of us had full waterproofs. But the weather gods were on our side and the squall was long gone by the time we got to the car park.

Having not been to the reserve for so long we took AH up the 'fairly' new Sky-tower for a panoramic view of the wetlands and reedbeds in the hope that now the weather had bucked up a Marsh Harrier or two might be on the wing.

Lillian's Hide was quiet  the usual waterfowl being present, mostly Shoveler, Teal, Mallard and Coot with a smaller number of Tufted Ducks and Gadwall. Compared to our previous visit a couple of weeks earlier the recent rains had filled the pool and there was now very little mud showing. Consequently numbers of wading birds was well down. A trio of small islands held a handful of Snipe and a few Black tailed Godwits, some of the latter still looking resplendent in their brick coloured summer finery.

On the path to the other hides we saw a small tree very close to the path that had been absolutely shredded by a Roe buck's antlers, a species we've always assumed was here or very close by but never seen on the reserve. No Bearded Tits were at the 'new' grit trays - apparently we'd just missed them by five minutes or so.

At the hide it was good to chat with SB again and we learned he'd been at the Long Toed Stint at the same time we had. But what about the birds? Nothing much to talk about really all was pretty quiet out there. A Great White Egret stalked about in the distance beneath the new Osprey nesting tower and a Little Egret was a little closer...more like the Carmargue or the Danube delta than NW Lancashire, just needed some Dalmatian Pelicans and/or Greater Flamingoes to complete the scene.

After a while a small party of Bearded Tits came to the edge of the reeds and began to work their way to our left giving distant but good views as they flew across a little bay in the reeds rather than taking the long way round. As they moved on we could still hear them calling and had an inkling they might well arrive at the grit trays. Off we went hoping to beat them there. We did but didn't have long to wait before their characteristic pinging was heard coming through the reedbed. And bingo our hunch was right there they were. Fantastic close range views of a gorgeous little bird. Like the other camera-laden folk there we filled our boots. 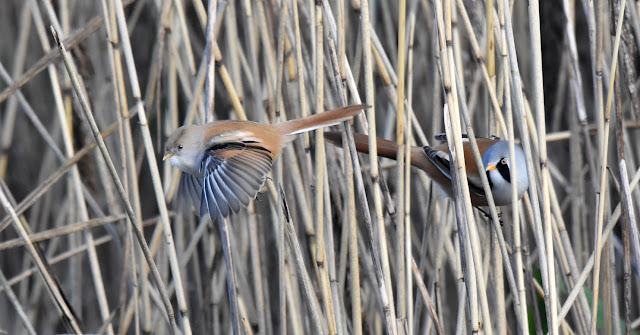 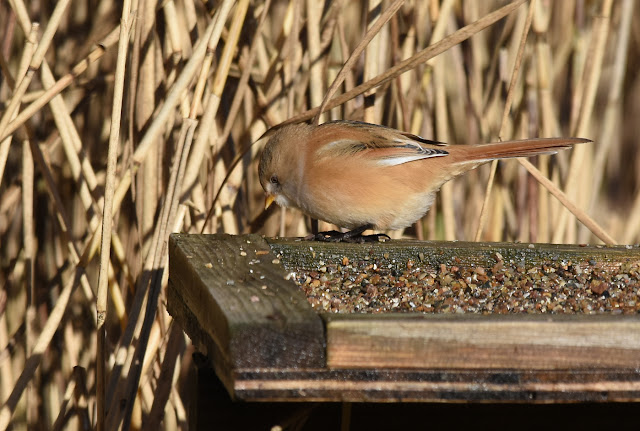 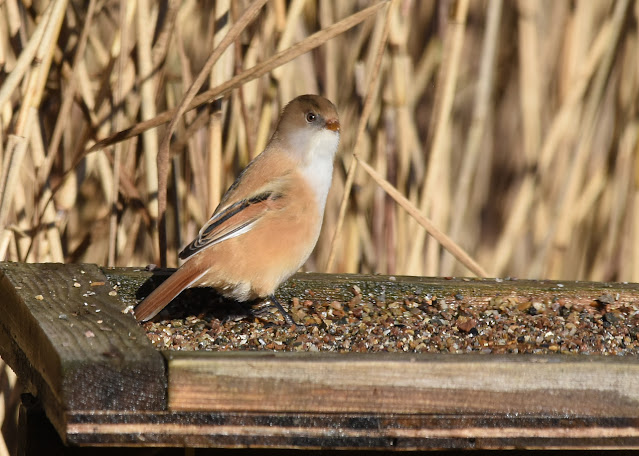 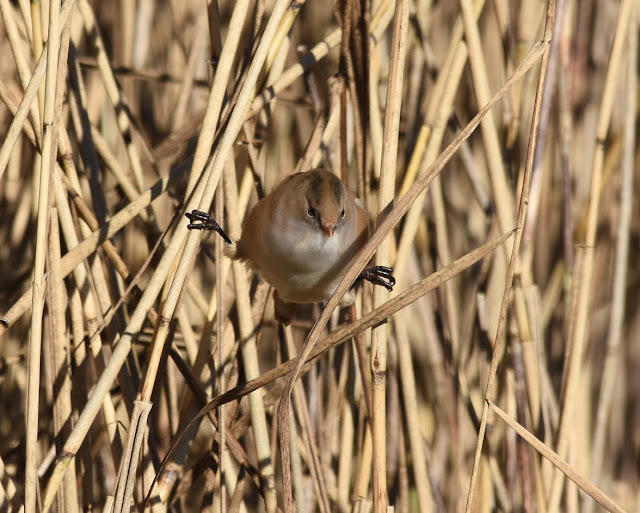 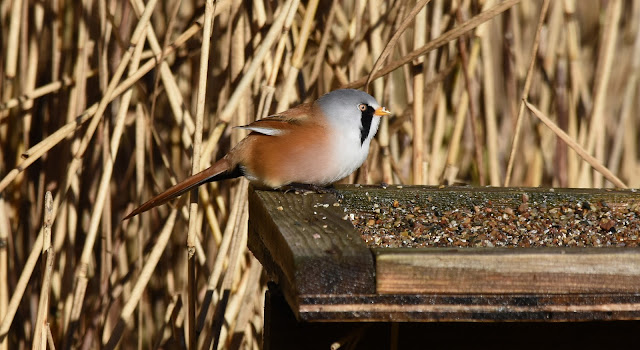 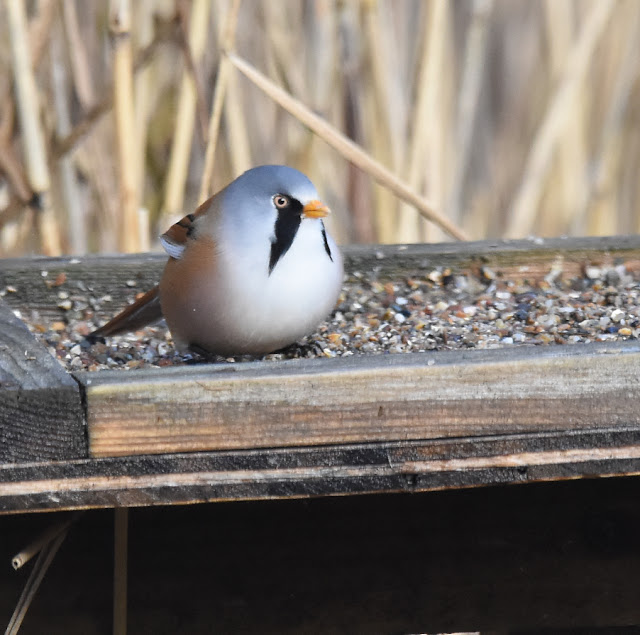 But have a good look at them. Don't you think their name is a terrible misnomer? Look again not a beard in sight! Surely Moustachioed Tit would be a better name. Donde esta mi sombrero, hombre?

We were entertained for a good ten minutes but wit the birds still there and more birders arriving for a look we moved on to make some space for them...actually if truth be know it was getting close to lunch time our tummy's were rumbling and the car boot held a couple of super tasty homemade pasties just waiting to be dipped into a dollop of brown sauce.

The pasties were as good as anticipated, even though a couple of days later we realised we'd forgotten to put in a top secret mystery ingredient - no worries they'll be even better next time!

After lunch we hit the trails again showing AH the 'new' (haha) boardwalk - well if you've not been for 25 years it'll be pretty new. On the way we stopped to inspect the by patches of Ivy growing along the roadside. Lots of insect activity, mostly Common Wasps and Drone Flies but no Ivy Bees, we've yet to catch up with one of those anywhere. A couple of Red Admirals were still on the wing taking advantage of the now warm sunshine...a very welcome change from the deluge we'd driven through to get here.

There wasn't much happening at the Causeway Hide apart from a few dragonflies buzzing around the small patch of cut reeds below the windows. Unfortunately they were very active and kept disturbing one another so getting a pic of them was impossible. Then a Marsh Harrier came in to view in the distance and kept us amused for a while and a Buzzard soared over the hillside further back.

Time to move on again and venture down the track to Lower Hide where SB had told us Otters had been seen in the last few days. Through the gate the regular Robin was by the bench ready to mug passing birders for any seed they may have secreted about their person. Other than him though the woodland was deadly quiet, not a peep from nothing. From the hide only a few Mallards were particularly close, the rest of the 'usual' ducks sitting much further out, Shoveler, Teal, Gadwall, a couple of Pintail snoozing on a mound of cut reeds, with plenty of Coots and a few Tufted Ducks diving in the deeper parts of the pool. Pick of the bunch were a handful of Pochards. So sad that these beautiful and intricately marked ducks are now becoming increasing rare.

With not a lot happening and certainly no Otters our eye started to wander all over the place finally resting on a lone cow in the field opposite. Odd we thought; you don't normally see a solitary cow in a field, bulls yes but cows no. We hadn't twigged there were probably more hidden behind the trees lining the road but for some reason this cow kept standing on its own with no friends. Our eye kept going back to it and then all of a sudden we saw it leap into action charging down the hill after a smaller animal, pale brown in colour that we assumed to be a Fox when it disappeared behind the thick hedge. Well you don't see that every day! But it wasn't a Fox, a few minutes later a Fallow Deer palmate antlers and all appeared on this side of the hedge. Wow! We've not seen one of those here for at least 20 years and bizarrely in the same field as we last saw and in our chat to SB earlier we'd actually mentioned we'd not seen Fallow Deer here for many years - spooky or what? Bit far for pics but you get the gist. 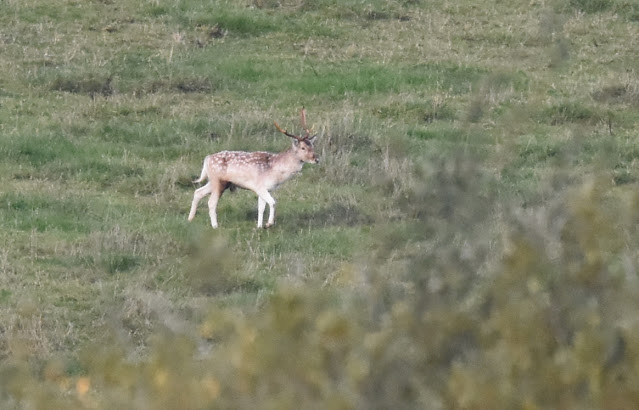 After all that excitement time was just about up and we had to take the leisurely stroll back to the car park stopping at a gap in the reeds to have a bit of a reminisce and a giggle where we both had watched a Bittern in full view for ages at practically point blank range years and years ago when a photographer came along asked what we were looking out and started to get his kit out of his silver peli-case. Yes you've guessed it as soon as he got his camera onto the trip the Bittern took one look at him and walked casually into the reeds never to be seen again. Apparently he'd only just put his camera away at the hide 100 yards away and was going back to his car to go home. Moral of the story - don't put your camera way until you get to where your going! Although these days with much more weather resistant kit you rarely see a camera case now.

Happy days, some great memories and new ones made all made possible by some fantastic wildlife.

Where to next? We've got a couple of short safaris to tell you about and of course we're still doing our Photo Year List Challenge - how are we getting on?

In the meantime let us know who's sneaking into the vegetation at the critical moment in your outback.