This last two or three weeks was possibly the worst cycle of rain & wind weather systems I have experienced in my years of being a birder, bird ringer and weather watcher.
Every day became a “no go” until a brief respite on Tuesday took me to our Pilling ringing site to assess the damage. Fortunately things were not as bad as feared once the still flooded track was negotiated by avoiding soft spots where the car might sink. Puddled net rides might dry out overnight given their open situation, while ropes left in situ were still visible if soaked and wind-blown wayward.
By a miracle and in the few hours of dry with glimpses of sun, it seemed a few birds had returned or perhaps never left; alongside the fence flew three Stonechats and in the trees Reed Buntings, Linnets, Chaffinches, Greenfinches and Redwings. A Buzzard mewed in protest as crows gave chase and Skylarks flitted overhead.
On the pool with ducks a single Gadwall faked being a Mallard and then drifted out of sight. I dreamt I heard a Water Rail. 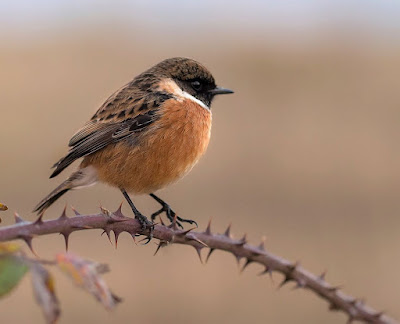 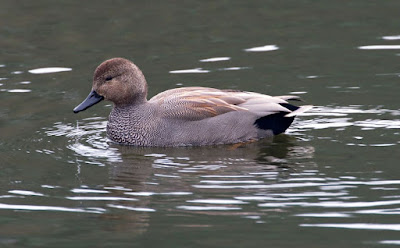 Gadwall
All was well for new a beginning on Wednesday, perhaps Thursday, and even Friday.
“Now then Mr Slade don’t get carried away. It can't last”, came the weatherman’s voice.
I arranged to meet Andy at 0645, a new time now that clocks are also back to a normal winter.
We rather hoped the Stonechats might be around to spice up the morning but there was no sign of any Stonechats, just the expected species list dominated by approximately 120 Linnets in several small parties that came and went through our four hours. The Stonechats were a “one day wonder” and almost certainly moved on during the overnight clear skies of Tuesday/Wednesday.
We caught 21 new birds – 7 Long-tailed Tit, 5 Linnet, 4 Greenfinch, 2 Redwing, 1 Robin, 1 Blue Tit and yet another Chiffchaff. 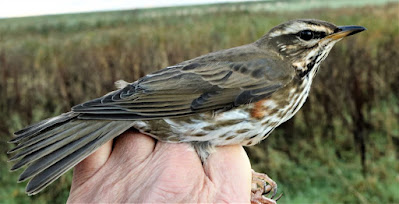 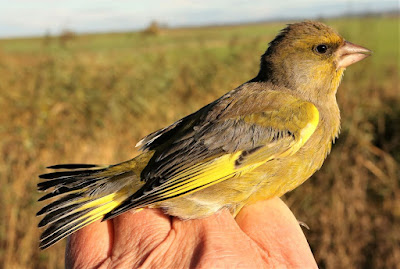 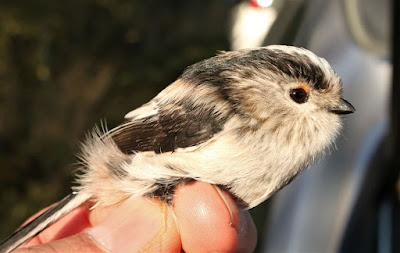 Long-tailed Tit
Birds noted in between our ringing, mostly approximate numbers: 120+ Linnet, 25 Greenfinch, 18 Redwing, 4 Skylark, 2 Chaffinch, 2 Reed Bunting, 10 Little Egret, 1 Buzzard, 1 Kestrel, 1 Sparrowhawk.
The forecast is OK for tomorrow, maybe even better by way of less of a breeze and more sun. We arranged to meet up again for another go.
What's that saying? Make hay etc, etc.