On a lovely wall to wall sunny day on Thursday, there was nothing more I wanted to do, than to get to do a 3 mile circuit Rigg Lane-Birk Bank-Cragg Wood-Littledale Road-Rigg Lane. There was half a chance of me finding the last Common Darter around the bog, and maybe some winter thrush to be seen.

Well, two visits to Birk Bank Bog, one at the start of the walk, and one at the end, proved my first hope wasn't to be, with not a darter in sight. But as I was leaving the boardwalk, the sound of a loud chattering 'schack-schack-schack' filled the skies above me, and by the time I ended the walk 3 hours later, I had seen the arrival and roaming around a wide area, of at least 365 Fieldfare. Flocks were seen several times in 3 hours estimated at 200/100/60/5

Mostly seen distant and in flight, the Fieldfare were accompanied by a few noticeably smaller Redwing, this flock were mobile west of Cragg Wood later in the afternoon at 3.00pm.

Couldn't resist a picture of the Robin by the lane to Rushy Lee.

Robin Rushy Lee. Pete Woodruff.
Seeing none today, I heard just one Red Grouse, 3 Raven drifted overhead as did a Kestrel which I saw twice later hovering in hunting mode, and as I wandered along Rigg Lane a small group of Long-tailed Tit were working through the trees. 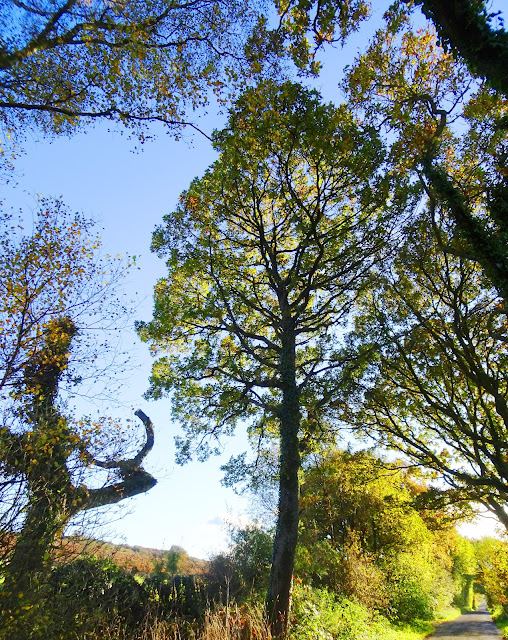 A brief glimpse of a butterfly in silhouette around the top of this tree on Rigg Lane would have had me thinking Purple Hairstreak had it been mid-summer, presumably a Red Admiral seen.
Epilogue.
It's been almost a month since my last post on B2B, and nearly the same length of time since I last escaped for some birding. On both counts that's the biggest gap since I started this blog 13 years ago on 15 November 2008 Here
I'm hoping to successfully address some issues to avoid any continuation of this situation which may take a while. Meanwhile, 300+Fieldfare around Birk Bank on Thursday certainly helped me on the way to that goal....Watch this space!