Monday morning I devote to the school run, transporting two of the grandkids to their school a mile or two away while their mum heads off to work and a 0830 start. That’s not to say there’s no birding or ringing for me because I later caught up with Andy at our Pilling ringing site at 0900.
He’d already had some success by catching a couple of Redwings, a few more Linnets and three “Continental” Blackbirds.
Almost three-quarters of the Blackbirds breeding in this country may be resident but others winter in France and yet others (particularly from Scotland and northern England) head for Ireland. Their places here are occupied by migrants from Scandinavia, Denmark and Germany. Some of these Blackbirds, more noticeably the males, display “continental” like features of sooty colouration, entirely dark bills, scalloped breast feathers and finely speckled throats. 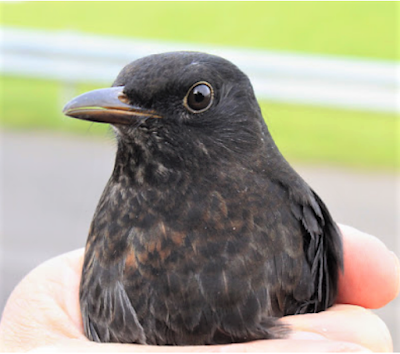 Blackbird
A southerly breeze and blowy net hindered our Linnet catch but we still gathered another seven individuals and so reached a total of 204 for this autumn. This is a great result so far with more to come and thanks are due to Farmers R and H for their support & encouragement during this and other years.
There’s no shortage of Greenfinch so far this autumn as testified by our catching of another nine that gave a total of 50 Greenfinch here during September, October and early November.
After a number of years in the population doldrums there’s little doubt that “green linnets”, Greenfinches, made something of a comeback during 2021. 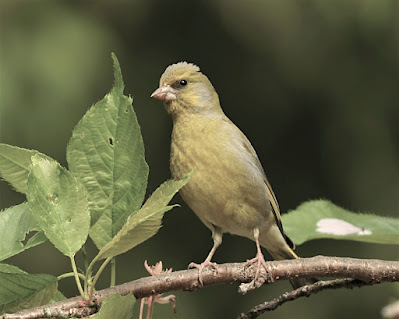 Greenfinch
Total birds caught on Monday - 7 Linnet, 9 Greenfinch, 3 Blackbird, 2 Redwing, 1 Wren, 1 Blue Tit.
On Tuesday the rain lasted all day long, not good for the already muddy paths we planned to tread on Wednesday morning.
Wednesday seemed fine at 0630 until we started to erect the first net and then half way through came a few spots of rain that became even heavier when the heavens opened. There was no option but to carry on and then close the net until the rain stopped after about fifteen minutes.
The sky remained grey and overcast, the morning quite unlike the one forecast except for a welcome wind of zero.  We caught 14 new birds - 6 Linnet, 3 Chaffinch, 2 Greenfinch, 1 Robin, 1 Wren and 1 Blackbird. 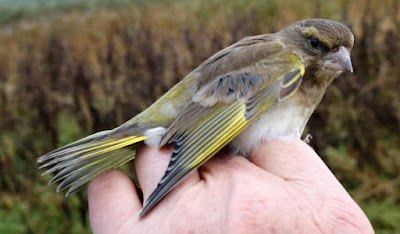 Greenfinch
Understandably the Linnets seemed reluctant to drop and feed in the saturated seed plot with the maximum seen about 60 birds milling around in contrast to the bigger flocks of late. It was as if by some unknown method of communication the Linnets knew to go elsewhere for a feed.

Linnet
The second year male Blackbird was another “continental” type with an above average wing length of 133mm and a healthy weight of 101gm. 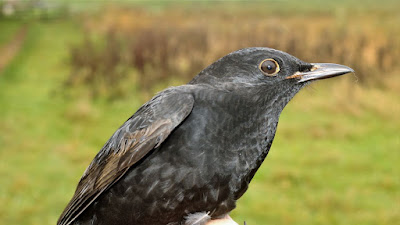 Blackbird
At this time of year it’s not only thrushes that may come from further afield and it was striking this morning how all three Chaffinches were not only adults but also of slightly larger dimensions than typical UK Chaffinches. The males came in at wing lengths of 92mm and 90mm respectively while the female’s wing gave up a whopping measurement of 87mm. 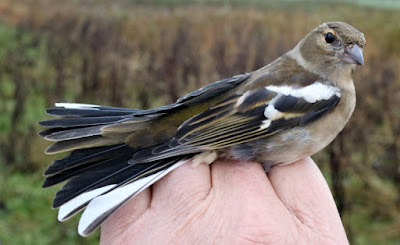 Chaffinch
In between birding was hindered by the weather but we noted good numbers of Lapwing, Curlew and Starling.
We watched a Sparrowhawk very nearly take a Linnet in flight, a drama eclipsed by the sight of a Merlin in relentless, twisting, turning and stooping dive bombing pursuit of a single Linnet. After a few close shaves the Linnet finally evaded capture when after a minute or so the Merlin gave up the chase to rest on a fence post.
Birding doesn't get much better than encounters like those two.