There’s no ringing again. It’s too windy until maybe Tuesday next.
Here’s something that may interest readers into all things wild and wonderful, especially those who eat the occasional meze, escargot or snail egg caviar on their holidays to the Continent.
On my way to drop seed at the ringing plot I stopped by the roadside to photograph an unusual sight - thousands of land snails. They were massed on several upright fence posts with lesser numbers spread out sideways onto supporting branch posts. 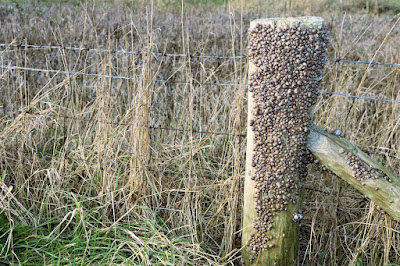 Snails
In all I counted at least ten fence posts that each held between a few dozen or several hundred snails. Most appeared to be small, perhaps young snails? There were lesser numbers of larger snails that I took to be the adults but as a snail greenhorn this was my nearest guess. 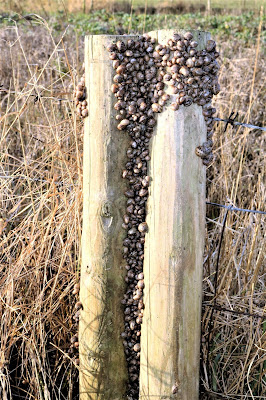 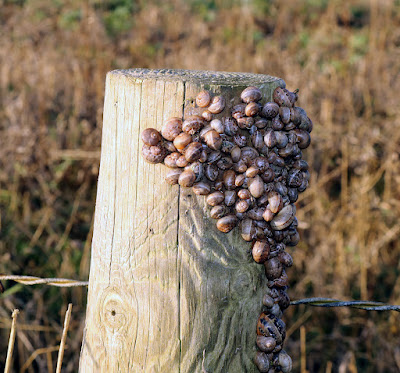 Snails
A look on Wiki and Snail Internet revealed some remarkable facts about the British gardener’s nemesis.
“The great majority of land snails are hermaphrodites with a full set of reproductive organs of both sexes, able to produce both spermatozoa and ova. A few groups of land snails such as the Pomatiidae, which are distantly related to periwinkles, have separate sexes: male and female."
"The age of sexual maturity varies depending on species of snail, ranging from as little as 6 weeks to 5 years. Most pulmonate air-breathing land snails perform courtship behaviours before mating. The courtship may last anywhere between two and twelve hours. In a number of different families of land snails and slugs, prior to mating one or more love darts are fired into the body of the partner. "
"Pulmonate land snails are prolific breeders (yes, we can see that) and inseminate each other in pairs to internally fertilize their ova via a reproductive opening on one side of the body, near the front, through which the outer reproductive organs are extruded so that sperm can be exchanged. Fertilization then occurs and the eggs develop. Each brood may consist of up to 100 eggs."
"Garden snails bury their eggs in shallow topsoil primarily while the weather is warm and damp, usually 5 to 10 cm down, digging with their foot. Egg sizes differ between species, from a 3 mm diameter in the grove snail to a 6 mm diameter in the Giant African Land Snail. After 2 to 4 weeks of favourable weather, these eggs hatch and the young emerge. Snails may lay eggs as often as once a month."
"Most species of land snail are annual, others are known to live 2 or 3 years, but some of the larger species may live over 10 years in the wild. In captivity, the lifespan of snails can be much longer than in the wild, for instance up to 25 years in H. pomatia."
"In the wild, snails eat a variety of different foods. Terrestrial snails are usually herbivorous; however some species are predatory carnivores or omnivores. The diet of most land snails can include leaves, stems, soft bark, fruit, vegetables, fungi and algae. Some species can cause damage to agricultural crops and garden plants, and are therefore often regarded as pests."
"In an attempt to protect themselves against predators, land snails retract their soft parts into their shell when they are resting; some bury themselves. Land snails have many natural predators, including members of all the land vertebrate groups, examples being thrushes and hedgehogs.”
A word of caution for anyone thinking of taking a drive over Cockerham way to reap this unexpected  harvest; wild-caught land snails prepared for the table but not thoroughly cooked can harbour a parasite (Angiostrongylus cantonensis) that can cause a rare kind of meningitis.
Wiki again - “Although there is not usually considered to be a tradition of snail eating in Great Britain, common garden snails Cornu aspersum were eaten in the Southwick area of Sunderland in North East England. They were collected from quarries and along the stone walls of railway embankments during the winter when the snails were hibernating and had voided the contents of their guts. Gibson writes that this tradition was introduced in the 19th century by French immigrant glass workers. "Snail suppers" were a feature of local pubs and Southwick working men were collecting and eating snails as late as the 1970s.”
It’s probably best to leave those snails for our UK Song Thrushes to eat – if only there were Song Thrushes left in the countryside. 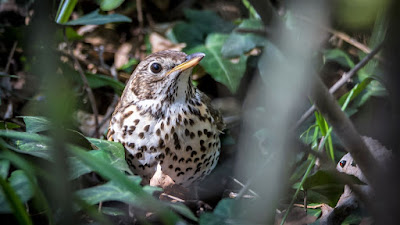 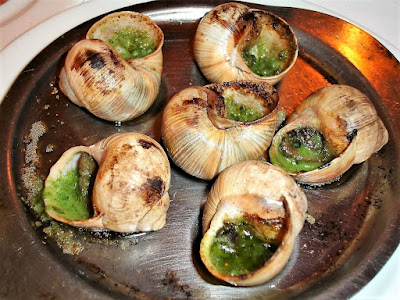 Escargots
In the meantime, enjoy your evening meal everyone.
Linking this weekend to Eileen's Saturday Blogspot and Anni in Texas.