..., or so it would seem, based on the number of wintering bird surveys I have completed of late! Over the past ten days I have completed seven surveys, and had a ringing session at our new feeding station in between. I'm not complaining at all, because it means we have had a spell of decent weather, and long may it remain so.
In my last post I talked about all the 'Vikings' that were around at the time, and since then there has been more of these Nordic birds arriving, but over the past few days this has slowed down. I am still hearing Redwings and the odd Blackbird moving at night, but the calls/minute that I record as a measure of how heavy the passage is, has reduced.
I have five wintering bird survey sites this year, and all except one in west Lancashire, near Ormskirk, are close to home. On 16th November, I was at one of my arable sites in northwest Lancs under full cloud cover, with a 10 mph south-westerly wind. At this particular site all the arable land has now been sown with winter wheat, which the Brown Hares seem to be enjoying, and on this morning, I recorded nine of these stonking mammals.
Watching the Brown Hares reminded me of a poem by Robert Macfarlane about Mountain Hares, but his description of how the Mountain Hare moves is equally applicable to Brown Hares.
Hare, walking, is graceless lollop,
Awkward piston, awkward shunt.
Running, hare smooths sudden into speed,
flows over hill-top, lee-slope -
Each quick arc a mark of hare, a sign of hope
Absolutely brilliant. Awkward piston, awkward shunt, I love it, such a perfect description!

Most of my wintering bird surveys are connected to the fact that most of Lancashire falls into what is known as a 'Pink-footed Goose and Whooper Swan wintering area', but the only Pink-footed Geese I recorded were 164 flying over. In addition to the Brown Hares making use of the winter wheat, eight Stock Doves and 176 Woodpigeons were also foraging in these areas.
Raptors were represented by a female Sparrowhawk, a male Kestrel and two Buzzards, and for the second week running I had a calling Chiffchaff. I mentioned that I had some more Vikings, and this morning was no exception, with six Song Thrushes, 263 Redwings, 13 Blackbirds and 205 Fieldfares present.
One of my wintering bird survey sites has nothing to do with wintering Pink-footed Geese and Whooper Swans, it is an enlightened land owner who is interested to know what is on their farm over winter. Again, it is northwest Lancs, and under 7 oktas cloud cover, with a 2 - 3 NW wind, I had a wander along the hedges, round the ponds and through the woodlands, the day after my previous survey.
I recorded 26 bird species on my wander round, and there were a number of species absent that I'm sure I'll pick up later in the winter. That's the problem with surveying, it is just a snapshot of what you encounter on one particular date, and that's why a number are completed during the winter to try and smooth out the peaks and troughs.
When I was undertaking this survey, I was recording quite a number of Blackbirds, and I started to think back on other recent surveys, and I realised that I was recording a good number of Blackbirds on all of my surveys. It would seem that there has been quite an arrival of them with Redwings and Fieldfares. Looking through them, I could pick out several continental male type Blackbirds, indicating that a high percentage of the Blackbirds that I was recording, were arrivals from Scandinavia. When I counted up from my survey maps, I could see that I had recorded 23 Blackbirds alongside seven Song Thrushes, a Mistle Thrush, 34 Redwings and ten Fieldfares. 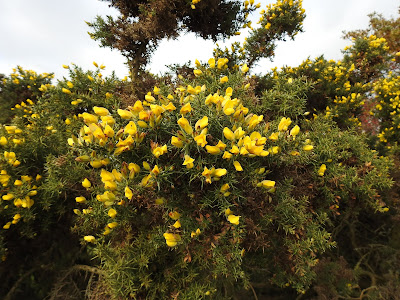 I can't resist photographing Gorse, mainly because it gives you a lift with its
bright yellow flowers in the dark of winter. And often you smell it first, with
that delicate coconut scent, before you see it. There was plenty of Gorse in
flower at this site.
My third morning surveying 'on the bounce' found me again in northwest Lancs at my other arable farm under full cloud cover, with a 3 - 4 westerly wind. This was an afternoon survey to cover the dusk period, and throughout the afternoon I was plagued with showers, and some of them were heavy, causing me to scurry to the nearest hedge and take shelter. In fact, I was about to call the survey off as the sun started to set, but thankfully it stopped raining and brightened up. 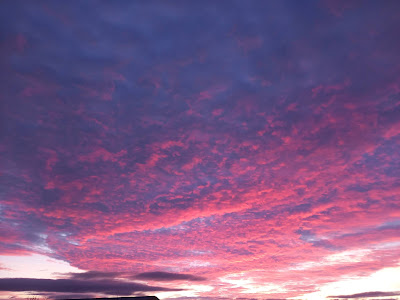 Sunset after the rain cleared
I've mentioned before that close to one of my VP locations is a fishing lake that I can see part of, and this morning there were two Gadwalls on it, which was a new species for me for the site. Woodpigeons were feeding amongst the stubble turnips, which is quite a weedy crop, and I had 505 of them, but I could only see two of their Stock Dove cousins.
I added another new species for me for the site, in the form of 14 Black-tailed Godwits that were heading north. A flock of 42 Skylarks and 53 Linnets in some of the stubbles was noteworthy, and the best of the rest included 138 Black-headed Gulls, a female Sparrowhawk, two Buzzards and Kestrels, 112 Jackdaws, 96 Rooks, a Raven and three Song Thrushes. There's been a few Songies about this autumn on the quiet.
Last weekend, Alice, John and I had our first ringing session at our good friends Robert and Diana's farm near Garstang. We managed to ring 36 birds as follows:
Great Tit - 12
Blue Tit - 11
Coal Tit - 2
Robin - 1
Chaffinch - 5
Blackbird - 1 (continental female)
Great Spotted Woodpecker - 1
Nuthatch - 2
Treecreeper - 1 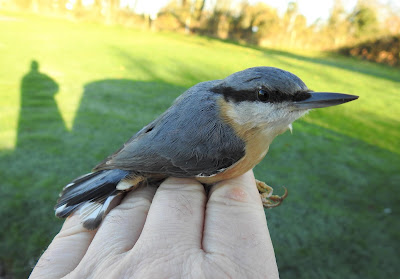 The masked bandit, aka a Nuthatch
We were quite busy, so birding records were thin on the ground, but did include 57 Redwings, a Tree Sparrow, a Siskin, a Grey Wagtail, a Lesser Redpoll, a Kestrel and that Fylde scarcity, a Bullfinch. I didn't see the Bullfinch, I could just hear it calling.
Earlier this week at another of my northwest Lancashire survey sites, this time all permanent pasture with hedgerows, ponds and scrub, I again noticed that there seemed to be quite a few Blackbirds. I counted up, and I had recorded at least 25. Another numerous species was Magpie, and I had 24 feeding in some maize stubbles! 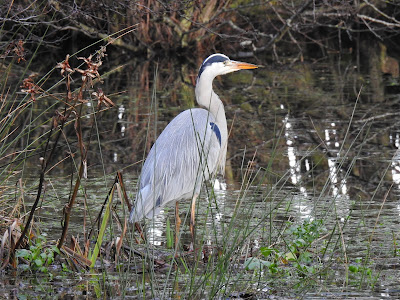 My second VP is next to a fairly large pond, and for the two hours that I
was stood there, this Grey Heron kept me company. At one stage I watched it
catch a large frog that was covered in bits of mud and debris from the bottom
of the pond, and the Heron kept dipping the frog in the water to rinse it, before
swallowing it down in one!
Mid-week I was down in west Lancashire surveying some arable farmland with a mix of stubbles and field vegetables. I was in my position at my VP half an hour before first light, and the first birds that I recorded, were a small group of eight Whooper Swans winging their way north, presumably to some feeding areas out on the moss. Pink-footed Geese were doing exactly the same, and I had 1,221 moving over in various directions.
I have surveyed this site previously, about 3 - 4 years ago I think, and one of the features then was the number of Mistle Thrushes I recorded, and today was no different, as I had at least five of these beautiful, monster thrushes. The stubbles held a flock of 89 Linnets, and 104 Lapwings and a calling Corn Bunting over were pleasing to note.
The following day I was back closer to home surveying, and it was Blackbirds and Magpies that featured again, with counts of 19 and 53 respectively! Gail and I should have been out ringing again this morning, but when we got up at 6:30 a.m. a quick check of the forecast before we headed out showed sleet/snow in the forecast where we were going, and very obviously, this isn't conducive to ringing!
And that's about it. I'll be out and about later in the week if the weather plays ball, so fingers crossed for some more decent weather!