This is just a quick update really, jut to let you know that I have nothing to report! On Sunday morning Gail and I were due to have a ringing session at the feeding station, but when we got up at 6:30 a.m. it said 'snow'! Where did that come from? I knew it was going to be cold, but there was no snow in the forecast the day before.
For obvious reasons, we can't be catching birds for ringing in such inclement conditions. As it happened, the snow didn't come in until later in the morning, so we might have managed a short session, but even if we had, we would have ended up with a wet mist net, which at 60 foot long is a bit of a nightmare to dry!
On Monday, Gail and I went to the feeding station to top the feeders up, and it was another cold and frosty morning, as you can see from the picture below, with a dusting of snow still present. After the feeders were duly topped up, we had a look on the wetland, but it was devoid of any waders and wildfowl because of the freezing conditions. There was only one thing to do, and that was to join Robert and Diana in their cosy farmhouse and drink a gallon or two of coffee! 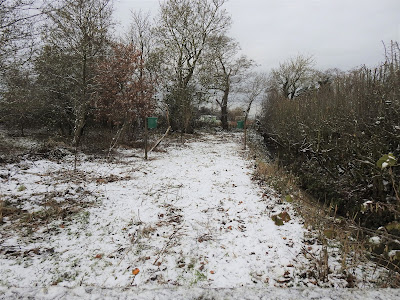 A snowy feeding station
The forecast is looking like I'll get a couple of surveys in towards the end of the week, with perhaps a ringing session at the feeding station at weekend. I'll let you know.