On Sunday morning I visited the feeding station to top the feeders up. Unfortunately, it was too breezy for a ringing session, so that will have to wait for another weekend. The feeders were duly topped up, and Robert and I stood and watched for a while to see what was coming in. The usual suspects were there, such as Blue Tit, Chaffinch, Great Tit, Nuthatch, Coal Tit etc., but it was pleasing to note that at least 15 Tree Sparrows were visiting the feeder closest to the hedge. Tree Sparrows nest at the farm, and we ring the pulli from the boxes, so when we eventually have another ringing session, it will be interesting to see if we recapture any birds from the boxes. There was also four Moorhens hoovering up any spilt seed from below the feeders! 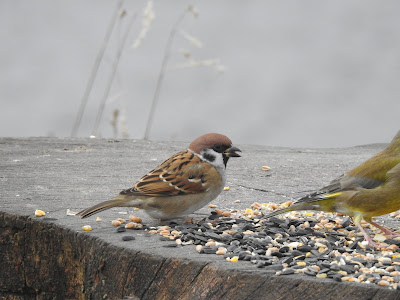 Tree Sparrow
Afterwards, we had a look on the wetland, and it was noticeable that there weren't many Teal, only four in fact. There were at least thirteen Shovelers and 78 Wigeon, so it seems unlikely that something had flushed the Teal. I then realised that it was probably the weather affecting the distribution of the Teal on site. The wetland has a fairly large open area of shallow water and grazed pasture along the northern edge of it, with rushes and a further open area of water within the rushes towards the back. The wind was cold, and from the north, and I suspect that the Teal were probably within the rushes, rather than feeding along the exposed northerly edge of the wetland. 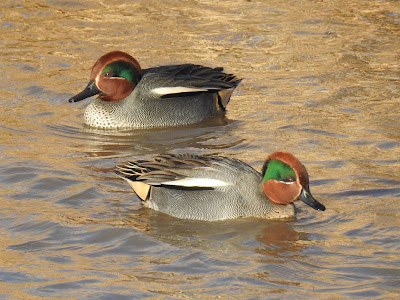 Teal
Also, just six days previous to this the wetland was frozen, and there didn't seem to be any wildfowl on it, or very few at best, and it might be that the numbers of Teal have been reduced because of this. I suspect that when I go again in a few days' time, there will probably be a few more. I hope so!